Endocytosis is a process in which a cell takes up a substance from the outside by enclosing it with vesicles. It was first proposed by Du Duve in 1963. Pathogens that devour and destroy immune cells are among them, as are nutrients that support cells.

Endocytosis is a biological process that involves the introduction of a material into a cell. The internal material is encased by the cell membrane area, which subsequently creates a bladder to hold the intracellularly budded and trapped material. A section of the cell membrane folds around extracellular fluid, chemicals, and microbes in this area. The vesicles that form break apart and are carried inside the cell. 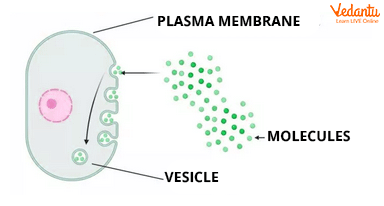 Cholesterol is a necessary component of the plasma membrane of the cell and also serves as a hormone precursor. The cholesterol is subsequently transported to other cells in the body via a lipoprotein complex (such as LDL or low-density lipoprotein). An LDL receptor on the cell surface contacts the LDL complex to start the endocytic process. The Endoplasmic Reticulum (ER) generated these receptors, which were then transported and processed in the Golgi.

Clathrins, along with other proteins that participate in the process, are recruited once the receptor is attached to the complex on the cell's surface. Clathrin-coated pits are formed when receptors cluster together. The covered pits are pinched off and uncoated, generating endocytic vesicles. The vesicle is transferred to an endosome after it has been uncoated. The low pH of the endosome promotes a conformational shift that allows the LDL particles to escape. The cholesterol is subsequently released into the cell after these particles are sent to the lysosome for breakdown. 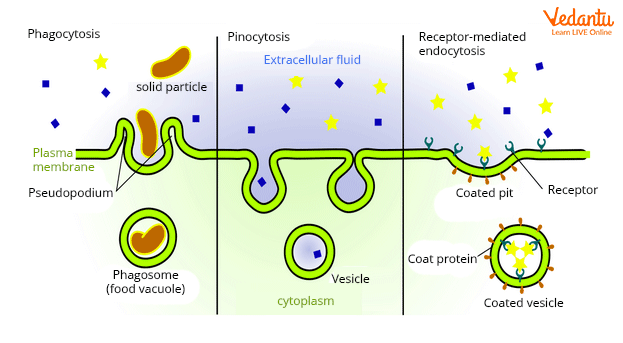 The process by which a cell's cell membrane extends toward a particle, engulfing it and enclosing it behind a folded membrane to form a phagosome. Phagocytosis is a pathogen-elimination technique used by White blood cells (macrophages, monocytes, neutrophils, eosinophils, and dendritic cells) in multicellular organisms.

Cell drinking, also known as fluid endocytosis, is a type of endocytosis in which minute particles from external fluids invaginate the cell membrane, generating a small vesicle with suspended small molecules or particles within the cell. For particle digestion, the pinocytic vesicle joins with the cell endosome.

Endocytosis, the process by which cells take in macromolecules, particulate particles, and, in specific cases, even other cells, is the starting point for the channels that go inward from the cell surface to lysosomes. The item to be eaten is gradually contained by a little section of the plasma membrane, which invaginates and eventually pinches off to form an endocytic vesicle containing the ingested substance or particle in this process. Endocytosis is divided into two categories based on the size of the endocytic vesicles produced. Phagocytosis is one form, which involves the swallowing of big particles such as bacteria or dead cells via huge vesicles known as phagosomes. On the other hand, Pinocytosis is the intake of fluid and solutes through small pinocytic vesicles. Pinocytosis is the process by which most eukaryotic cells continuously consume fluid and solutes; big particles are best ingested by specialized phagocytic cells.

FAQs on Endocytosis for NEET

1. What are the most significant distinctions that can be made between endocytosis and exocytosis?

Endocytosis is the act of bringing a material or particle from outside the cell that has been captured by the cell membrane and brought inside the cell. This process takes place when the cell membrane engulfs the substance or particle. The act of vesicles fusing with the plasma membrane and releasing their contents into the extracellular space is referred to as exocytosis. Exocytosis occurs when a cell divides.

2. What is meant by cell transport?

3. What is the function of endocytosis?

Endocytosis is employed to modulate cell signalling responses as well as receptor signalling, nutrient uptake, membrane remodeling, pathogen entry, and neurotransmission. Endocytosis has been discovered to enhance cell migration in developing tissues. Toxins, infections, and foreign debris have all been discovered to use the many endocytic pathways to gain access to the cell. Clathrins (proteins .

required for vesicle shape and formation) will be recruited or the first steps of the pathway will be initiated by the particles to begin the process of entering the cell.