There is good news for all students struggling with the NCERT problems of Class 9 Atoms and Molecules chapter. The NCERT Solutions for Class 9 Science Chapter 3 PDF file prepared by Vedantu experts are now available for free download. Our experts have followed a very easy approach in preparing these CBSE Solutions for Class 9 Science Atoms and Molecules chapter. Referring to the Class 9 Science Chapter 3 PDF will help you solve and practice all the exercise questions precisely. So, download the PDF and refer to the solutions for effective exam preparation. Maths Students who are looking for the better solutions ,they can download Class 9 Maths NCERT Solutions to help you to revise complete syllabus and score more marks in your examinations. 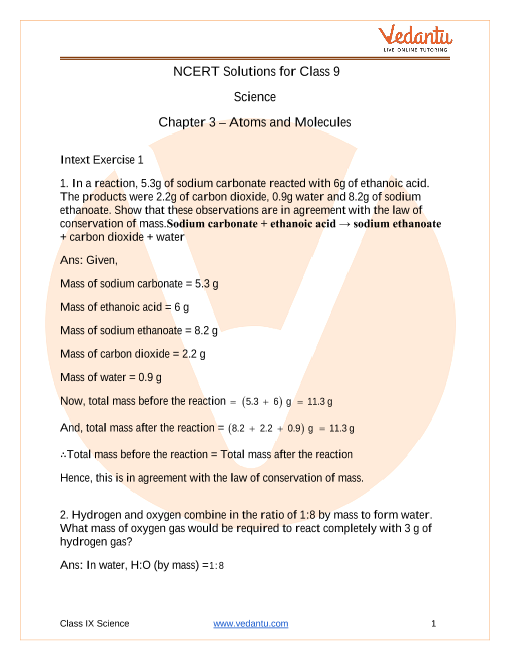 You can opt for Chapter 3 - Structure of Atom NCERT Solutions for Class 9 Science PDF for Upcoming Exams and also You can Find the Solutions of All the Maths Chapters below.

The NCERT Solutions for Class 9 Science Chapter 3 on Vedantu can be accessed by students online and can also be downloaded for free. Following these NCERT solutions will help you get an insight into all the concepts covered in this chapter.

There are two laws of chemical combination- the law of conservation of mass, and the law of constant proportion. Both these laws are discussed in detail in chapter 3, science class 9.

There is one important question related to the chemical reaction. Is there any change in the total mass of the system when a chemical reaction takes place? According to the law of conservation of mass, mass can neither be created nor be destroyed. The same logic stands true for chemical reactions as well.  Several experiments carried out by Lavoisier standardized this law. This law is discussed in NCERT Solutions for Class 9 Science Chemistry Chapter 3.

The issue that the scientist faced with the law of constant proportion is to provide a possible explanation for this. Eminent scientist John Dalton tried to provide an explanation and introduced the concept of atoms. An atom is the smallest unit of matter. They are so small that thousands of them are stacked in your hair. The atom of one element is different from that of the other elements. Therefore, each of these atoms is depicted by different symbols.

Dalton used different combinations of straight lines and circles for denoting various atoms. However, the modern-day symbols consider the first or the first two letters of the element's name to denote an atom of the element. For example, Hydrogen is denoted by H and Oxygen by O. In some cases, and the Latin names are also considered. For example, the Latin name of Potassium is Kalium, and it is denoted by K. A list of names of elements is shown in Atom and Molecules Class 9.

However, atoms cannot exist freely in nature. It interacts with the same or different atoms to form molecules. They can also form ions. These ions or molecules aggregate to form elements of compounds that we can see. These concepts are covered in Ch 3 Science Class 9.

A group of two or more atoms is joined together to form a molecule. A molecule can exist freely in nature. For example, Hydrogen, Oxygen, Calcium molecules can exist freely in nature. Molecules can be created from the same atoms or different atoms. If the molecules are made from the same kind of atoms, they are called molecules of elements. For example, Sodium and Potassium elements. Examples of molecules of elements are shown in Atoms and Molecules Class 9 NCERT Solutions.

Sometimes, the atoms can be charged. Charged atoms are called ions. An ion can always be charged positively or negatively charged. Positively charged ones are known as cations, while negative ones are known as anions. Sometimes, a molecule can contain more than one ion. Such molecules make a polyatomic ion. The individual charges on each atom determine the net charge of such ions. To learn more about polyatomic ions, go through Class 9 Science Chapter 3.

For the proper representation of the chemical formula, the valency of individual ions must be balanced. The metal names should come before any non-metal name. In the case of polyatomic ions, the individual elements must be kept in a bracket if their overall valency is more than one. Otherwise, there is no need to use a bracket—for example, NaOH. You will learn more about writing chemical formulas when you go through the NCERT Solutions for Class 9 Science Chapter 3.

Formula unit mass is calculated similarly to molecular mass. However, the ions’ mass is considered in calculating the formula unit mass of a compound. Learn more about formula mass units in ch 3 science class 9.

Mole concept is another important concept related to atoms and molecules. It defines the total number of molecules taking part in a chemical reaction. You can learn the mole concept in detail in Atoms and Molecules Class 9.

NCERT Solutions for Class 9 Science Chapter 3 has the following features.

A1. When you study ch 3 science class 9, you will have a clear concept about atoms. Atoms are the smallest component of any matter that can exist independently in nature. However, some atoms cannot exist freely and form molecules with the same type of atoms or form compounds with different atoms. Go through the class 9th science chapter 3 for a detailed explanation of the concepts related to atoms and molecules.