NCERT solutions for class 7 science chapter 6 Physical and Chemical Changes PDF is now available on the official website of Vedantu. Students can find all the solutions to their NCERT questions in this PDF. It is created by experienced science tutors who have many years of experience in the academic field. NCERT solutions will provide you with the most accurate answers, along with a good understanding of the topics. In case of any academic-related queries, you can connect with the Vedantu experts on the official website and get adequate assistance on your doubts.

It is important to revise all the NCERT questions and gain an in-depth knowledge of all NCERT Class 7th science chapter 6 topics so you score well in exams. You can also download NCERT Solutions for Class 7 Maths to help you to revise complete syllabus and score more marks in your examinations. 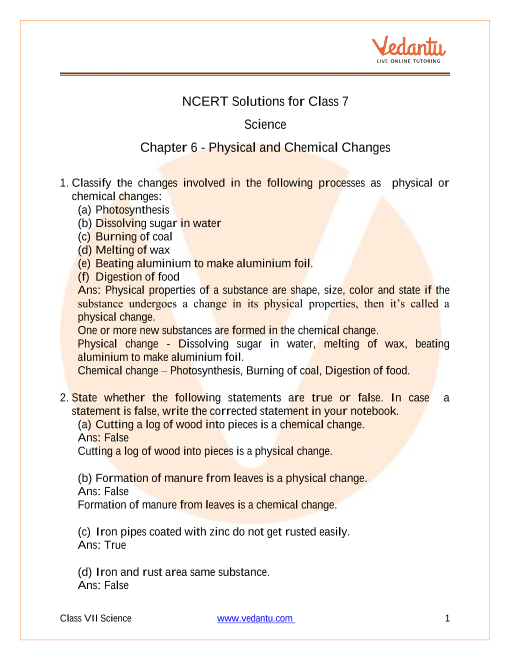 Physical and Chemical Changes, Chapter 6 of NCERT Grade 7 Science, is broken into four sections for easier comprehension. The chapter opens with several instances of changes that occur every day in our environment. The first section employs five distinct tasks to explain what the word "physical changes" means. The qualities of physical alterations are derived from the findings of these actions.

1. Classify the changes involved in the following processes as  physical or chemical changes:

(b) Dissolving sugar in water

One or more new substances are formed in the chemical change.

2. State whether the following statements are true or false. In case a statement is false, write the corrected statement in your notebook.

(a) Cutting a log of wood into pieces is a chemical change.

Cutting a log of wood into pieces is a physical change.

(b) The formation of manure from leaves is a physical change.

The formation of manure from leaves is a chemical change.

(c) Iron pipes coated with zinc do not get rusted easily.

Iron and rust are different substances.

(e) Condensation of steam is not a chemical change.

3. Fill in the blanks in the following statements:

(a) When carbon dioxide is passed through lime water, it turns milky due to the formation of ----------.

Ans: When carbon dioxide is passed through lime water, it turns milky due to the formation of calcium carbonate.

Ans: Two methods by which rusting of iron can be prevented are Painting And Galvanizing.

(d) Changes in which only ---------- properties of a substance change are called physical changes.

Ans: Changes in which only physical properties of a substance change are called physical changes.

(e) Changes in which new substances are formed are called

Ans: Changes in which new substances are formed are called chemical changes.

4. When baking soda is mixed with lemon juice, bubbles are formed with the evolution of a gas. What type of change is it?  Explain.

Ans: First the wax of the candle melts, then vaporizes and burns. Here Melting of wax is a physical change as no new substance is formed and the melted wax can be converted back.

When the wax burns, two new substances are formed which are smoke and carbon dioxide. So, it’s a chemical change.

In LPG both the chemical and physical changes take place. As we know LPG is present as a liquid form in the cylinder.

Here the physical change occurs when it comes out of the cylinder. That time it converts into gaseous form.

When that gas burns in the air it undergoes a chemical change.

6. How would you show that the setting of curd is a chemical change?

Ans: When some sour substance is added to milk and kept overnight, it turns into curd. Once the curd is formed, then there is no way curd can be converted back into milk. Both milk and curd are different and they have different properties So, the formation of curd is a  chemical change.

7. Explain why burning wood and cutting it into small pieces are considered two different types of changes.

8. Describe how crystals of copper sulphate are prepared.

Ans: Take a water-filled beaker and add a few drops of dilute Sulphuric acid into it. Then the water is heated, when it starts boiling slowly add copper sulphate powder during this process stir continuously. Add more copper sulphate till no more powder can be dissolved. The solution is now filtered and allowed to cool down. Crystal of copper sulphate slowly forms at the rock bottom of the beaker. By the method of crystallization Crystals of copper sulphate can be prepared.

9. Explain how the painting of an iron gate prevents it from rusting.

Ans: Rusting is the process in which a piece of iron in the open air acquires a  film of a brownish substance called rust. For rusting, iron should be in contact with both air and moisture. When an iron gate is painted then the layer of paint cuts the contact between air, moisture and iron. Thus, it prevents rusting. So, when we paint an iron gate it prevents rusting.

10. Explain why rusting of iron objects is faster in coastal areas than in deserts.

Ans: Rusting is the process in which a piece of iron in the open air acquires a  film of a brownish substance called rust. Both air and moisture are necessary for rusting of iron objects. Due to the presence of the sea,  In coastal areas, there is more moisture in the air. But, in the desert, there’s a scarcity of water and hence the air is nearly dry. This is the reason why rusting is faster in coastal areas than in deserts.

11. The gas we use in the kitchen is called liquefied petroleum gas (LPG). In the cylinder, it exists as a liquid. When it comes out from the cylinder it becomes a gas (change A) then it burns (change B). The following statements pertain to these changes. Choose the correct one.

(i) Process – A is a chemical change.

(ii) Process – B is a chemical change.

(iii) Both processes A and B is a chemical change.

(iv) None of these processes is a chemical change.

In a chemical change, one or more new substances are formed.

12. Aerobic bacteria digest animal waste and produce biogas (change – A). The biogas is then burnt as fuel (change - B). The following statements pertain to these changes. Choose the correct one.

(i) Process – A is a chemical change.

(ii) Process –B is a chemical change.

(iii) Both processes A and B are chemical changes.

(iv) None of these processes is a chemical change.

Ans: (iii) Both processes A and B are chemical changes.

In a chemical change, one or more new substances are formed.

Looking for NCERT solutions for class 7 science? You have reached the right page. All the NCERT solutions prepared by our experts are uploaded here in the PDF format. You can find all the NCERT answers in this PDF and revise your concepts daily. Just one click will have the entire solution PDF downloaded on your mobile phones or laptops. Keep revising.

We notice various changes around us every day, such as the setting of curd from milk, dissolving sugar in water, and many more. These changes can broadly be characterized as chemical and physical changes. In this chapter, we shall learn about various chemical as well as physical changes in detail.

Activity 6.1, 6.2, 6.3, 6.4, and 6.5 in this section explains the concept of physical changes. Before starting with the practical experiments, you must know some basic terms and definitions that will help you understand the concept in a better way.

Physical Properties: Shape, size, colour, and state of any substance are known as its physical properties.

Perform all the experiments discussed in this section and you will surely have a better understanding of the physical properties of a substance and physical changes.

a. Ripening of fruits

b. Fermentation of grapes

d. Burning of coal, wood, or leaves. In fact, the burning of a substance is a chemical change because burning is always accompanied by the production of heat and other gases.

Rusting of iron is a chemical alteration that not only affects iron articles but slowly and gradually destroys them, as well. In this section, you will study in detail the rusting of iron, its properties, and the cause. Note the following word equation for rusting –

Note: The presence of oxygen and water is an essential condition for the process of rusting to take place. You can always prevent rusting of iron by preventing the iron article from coming in contact with oxygen, water, or both.

Now, you are well aware of physical and chemical changes. Make a list of some changes happening in your surroundings and try to classify them as physical and chemical changes. This small activity will help you understand the concept in a much better way. In case of any doubts, you can always reach out to the experts at Vedantu on our official website.

Revising NCERT concepts and exercises is the best way to score good marks in exams. You just need to follow the solution pattern of Vedantu and you can rest assured that you are on the right track. These solutions help you with correct answers as well as serve as a step by step NCERT guide for the students having trouble understanding the chapters. Some notable features are:

1. You can download the solution PDF at any time as per your convenience.

2. All the solutions prepared by Vedantu experts are correct.

3. All important points and step by step patterns of answering questions are mentioned here.

4. Work hard and keep revising all the solutions from Vedantu solution PDF.

1. What is a physical and chemical change according to Chapter 6 of Class 7 Science?

Physical Change: Any change in a substance’s physical properties like shape, size, colour etc. is said to be a physical change. It is generally a reversible change and no new substance is formed during this.

Chemical Change: When a substance combines with any other substance to form a new substance or when it undergoes a chemical reaction, the change that occurs is known as a chemical change. It is generally a non-reversible change.

2. What is a chemical change? Write a short answer as stated in Chapter 6 of Class 7 Science books.

When a substance combines with any other substance to form a new substance or when it undergoes a chemical reaction, the change that occurs is known as a chemical change. It is generally a non-reversible change.

These changes are generally termed chemical reactions. Some examples of chemical change are as follows;

3. How many questions are present in Chapter 6 of Class 7 Science?

4. What are the important topics in Chapter 6 of Class 7 Science?

When a candle is lit, it undergoes both physical and chemical changes:

To do well in tests, you should go through all of the NCERT questions and obtain a thorough understanding of all of the Chapter 6 of Class 7 Science provided by Vedantu on its website(vedantu.com) or mobile app.