Students, under CBSE board Class 7, often meet obstacles when they fail to achieve the right study materials for their studies and projects. At Vedantu, NCERT Solutions for Class 7 Science Chapter 4 is available in the PDF format. Promising learners who want to avail quality materials for their studies can choose to download the contents from the site. Heat Chapter Class 7 NCERT PDF at Vedantu is designed by professional teachers who are into this profession for years. Also, they have been curated based on the latest syllabus (2018-2019) by the Central Board of Secondary Education. NCERT Solutions for Class 7 Science Chapter 4 along with other notes, sample papers and revisions provided, are very important for students to top the results in this competitive educational race. So, download Heat Chapter 4 Class 7 notes from Vedantu and raise the chances of meeting a new high. Maths Students who are looking for the better solutions ,they can download Maths NCERT Solutions Class 7 to help you to revise complete syllabus and score more marks in your examinations. 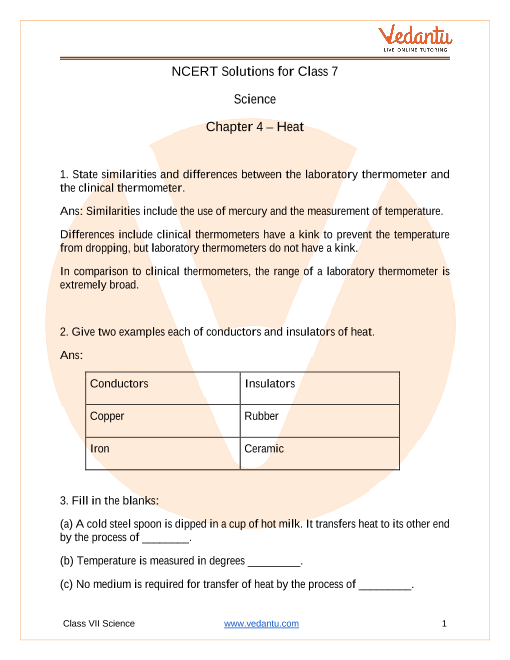 1. State similarities and differences between the laboratory thermometer and the clinical thermometer.

Ans: Similarities include the use of mercury and the measurement of temperature.

In comparison to clinical thermometers, the range of a laboratory thermometer is extremely broad.

2. Give two examples each of conductors and insulators of heat.

f. Temperature of boiling water cannot be measured by a __________ thermometer.

5. Discuss why wearing more layers of clothing during winter

Ans: When more than one layer of clothing is worn, air gets trapped between them. Heat does not transmit well through air. As a result, the insulation improves and we are more comfortable.

6. Look at Fig. 4.2. Mark where the heat is being transferred by conduction, by convection and by radiation.

7. In places of hot climate, it is advised that the outer walls of houses be painted white. Explain.

Ans: White-surfaced objects radiate more heat and absorb less. As a result, less outside heat would enter the house.

Ans: d. The temperature lies between 3000C to 5000C. As it is a mixture of waters boiled at two different temperatures.

a. Flow from iron ball to water.

b. Not flow from iron ball to water or from water to iron ball.

d. Increase the temperature of both.

Ans: b. Not flow from iron ball to water or from water to iron ball. It is due to the fact that both the substances, the water and the iron have the same temperature.

10. A wooden spoon is dipped in a cup of ice cream. Its other end

a. becomes cold by the process of conduction.

b. becomes cold by the process of convection.

c. becomes cold by the process of radiation.

d. does not become cold.

Ans: d. does not become cold. Heat conducts poorly through a wooden spoon. Its opposite end does not grow cold even if it is dipped in a cup of ice cream.

11. Stainless steel pans are usually provided with copper bottoms. The reason for this could be that

b. Such pans appear colourful.

c. Copper is better conductor of heat than the stainless steel.

d. copper is a better conductor of heat than the stainless steel.

Aspirants will be able to download CBSE Class 7 Science Chapter 4 as per their convenience and requirements. They can also refer the notes to their friends to make learning more gratified. Students, through the notes provided, will be able to gain crucial insight into the chapters. NCERT Solution for class 7 science chapter 4 is prepared by the best teachers and easy to understand.

While performing our daily tasks, we often need to touch a number of objects, among which some are cold and hot. Obviously, an iron rod exposed to the sun for longer period becomes hot and an ice-cream stored in the refrigerator stays cool. Without noticing, we keep playing between hot and cold. Now, the degree of temperatures varies depending on the situation and objects. So, how is it possible to determine which objects are hotter than others? Naturally, by touching the object it is possible to figure out, but finding accuracy in temperature can become a problem.

When reading a thermometer, make sure to note the difference in temperature indicated by two bigger marks. Also, you can note the number of divisions. If a bigger mark reads one degree and it is divided into five divisions, it indicates 1/5 = 0.2 °C. Before using a thermometer, give it some nice jerks so that the mercury accumulates down at the bulb and prevent wrong readings. Now, place the thermometer under the tongue or underarm. After one minute precisely, take out the thermometer and note down the temperature. It is our natural body temperature. Our normal body temperature should be around 37°C.

Important Note: Thermometer must be prevented from receiving falling as it is made of glass. Also, it can be harmful if the mercury leaks out. Do not hold a thermometer by the bulb when reading.

The thermometers what we see today are an advanced form of traditional thermoscopes. It was first invented by the famous scientist Galileo Galilei. At first, he used a device that looked like an open tube filled with liquid. However, despite evolution, some of the numerical scales for measuring temperatures are still the same. The Fahrenheit and Celsius scales are mostly used for measuring different types of temperatures. Interestingly, there were more than 35 scales designed by 1700s, but finally, conclusions were made by Daniel Fahrenheit and Swedish physicist Anders Celsius. Daniel Fahrenheit assigned the boiling point of water at 212 degrees and the freezing point at 32 degrees. In 1742, Anders Celsius developed the centigrade scale and therefore, assigned the boiling point of water at 0 degrees and the melting point of ice at 100 degrees. The new age Celsius scale is generally popular with 0 degrees at the cold end and 100 degrees at the hot end. Remember, Fahrenheit and Celsius’s scale are same when each comes at the point of -40 degrees.

Other popular scales that are used for laboratory works are Kelvin and Rankine scales. In 1848, British inventor Lord Kelvin, officially known as William Thompson proposed a scale using the Celsius measurement. However, it was keyed to absolute zero (-273.15°C). Looking at the Rankine scale, it was invented by Scottish engineer William Rankine. He, in his research, used the Fahrenheit’s scale and keyed down to absolute zero (-459.67 °F). It is important to keep in mind that when it comes to theoretical temperature, absolute zero is the coldest reading in any substance that does not possess any heat energy.

Have you ever thought why a frying pan becomes hot when placed on a source of flame? This happens due to the transfer of heat. The heat from the source passes to through the frying pan and cooks the food inside it. Gradually, it starts cooling down when removed from the source of heat. Again, why does it cool down? The heat escapes from the pan by transferring through the floor or anything that touches it. Therefore, it is clear that heat flows from hotter objects to cooler ones. The same happens even in the case of nature that builds the cycle of heat and rain.

4.5 Kinds of Clothes We wear in Summer and Winter

It is common for us to wear light coloured clothes in the time of summer and dark coloured clothes during winter. The reason behind this is its scientific cause. Anything which is light coloured absorbs less heat and reflects more. During the daytime, consider standing in front of a building that is painted white. It’s good if it is newly painted and the colour is glossy. You will notice that standing in front of the building for a long time isn’t possible. Also, the interior of the building remains relatively cooler when compared with other buildings. This is because light colours absorbs less heat and reflect more. On the contrary, the occupants in the building may feel the shiver during winter months. As light colours are unable to absorb more heat, they remain cool even during cold weather. For this reason, it is said to always wear dark coloured clothes during winter so that the heat inside our body cannot escape. It also helps us in preventing the natural and colder breeze from entering in and making our body cold.

Why do woollen clothes provide warmth in winter seasons? This is because wool is a bad conductor of heat. The fibres of wool help in keeping the air trapped inside and thus, keep the cold out. The trapped air stops the movement of heat to cold surroundings. Therefore, it is competent in keeping us warm. In a winter night, if you use a couple of blankets to make yourself warm, it will be a lot effective when compared with someone who is using a single blanket. This is not because of mere number count. The fact is, the air which is trapped between the two blankets, keeps you warm and prevents cold to enter in.

Vedantu is considered as a reliable platform for various study tools for different classes under CBSE board.