An Introduction to Thermal Stress and Strain

Thermal stress and strain are the properties of a material that are witnessed with an increase or decrease in temperature. Thermal stress is developed when the material is not allowed to expand or contract freely with the increase or decrease in temperature. The corresponding developed in this case is called thermal strain. Stress and strain of a material are both correlated with one another using the Young’s Modulus.

Let us first understand in depth what thermal stress is. As mentioned earlier, thermal stress is the property of a material when its dimensions change with the increase or decrease in temperature, yet it is not allowed to expand or contract freely. 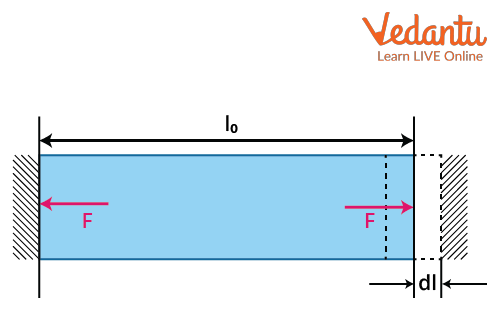 Thermal strain is a property of material wherein a material is allowed to contract or expand freely with the increase or decrease in temperature. Thermal stress causes the body to produce thermal strain.

Consider a thermal conducting rod that expands when heated. The length change will be proportional to the amount of heat provided and the coefficient of thermal expansion. As a result, we can express thermal stress mathematically as:

L denotes the length in metres.

Ti is the initial temperature in degrees Celsius.

Tf is the final temperature in degrees Celsius.

T=Tf-Ti is the temperature change in degrees Celsius.

α is the coefficient of thermal expansion.

The rate at which an object's shape/physical dimensions change in response to temperature changes is defined as the coefficient of thermal expansion. It varies depending on the material. It measures the fractional change in length of material per degree rise in temperature, keeping the pressure constant. 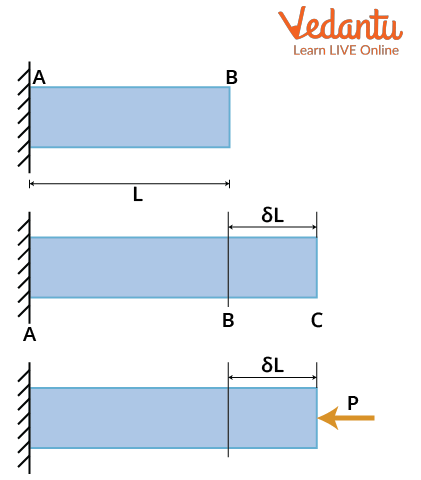 Thermal stress in a rod

Increase in temperature of the metal bar, $\Delta$T = T2-T1

What is Young's Modulus?

Young's Modulus of elasticity, denoted as E, measures the stiffness of a material or a body, when it is subjected to a force to alter its dimensions lengthwise.

The numeric value of Young's Modulus denotes either high stress or low strain. Thus, its value is fundamental. For example, rubber can easily be deformed and lower stiffness. Thus, the Young’s Modulus value of rubber is low as compared to steel or diamond.

Example 1: A uniform cylindrical rod of length L and radius r is made from a material whose Young’s modulus of Elasticity equals Y. When this rod is heated by temperature T and simultaneously subjected to a net longitudinal compressional force F, its length remains unchanged. The coefficient of volume expansion of the material of the rod is nearly equal to?

Change in length due to temperature change is given by

Hence, the coefficient of volume expansion of the material of the rod is nearly equal to $\dfrac{3F}{\pi r^2YT}$.

Example 2:  What will be the pressure that has to be applied to the ends of a steel wire of length 5 cm to keep its length constant when its temperature is raised by 50 K? (For steel Young’s modulus is 2$\times$1011 Nm-2 and coefficient of thermal expansion is 1.1$\times$10-5 K-1)

Thermal stress in a rod is the pressure due to the thermal strain.

It can be seen from above that thermal stress and strain are fundamental properties of a material. Both are dependent on temperature. The rise or fall in temperature changes its dimensions. A major difference between the two is that the material in one is allowed to expand or contract freely, whereas the same is not the case for the other. Thermal stresses lead to deformation in the material, which further depends on material types and constraints. Stress induced in a material gives rise to strain. A detailed overview of how the temperature changes the dimensions and the relationship between stress and strain is discussed above.

FAQs on Thermal Stress and Strain

1. What are the different types of thermal stresses?

Thermal stresses can be further divided into tensile and compressive stress, hydraulic and tangential or shear stress. The types of stresses depend upon the action of force that is deforming the material and how the orientation of the body changes on the application of the applied force.

2. What is thermal shock?