How do Households Get Electricity?

Many generators that we come across in our life operate on the similar principle of electromagnetic induction. However, there are some generators which directly convert solar energy from the Sun into electrical energy. These are termed as solar generators.

After the completion of the generation of electricity, the voltage of the current produced is adjusted with the help of transformers. As we already know that the transformers are divided into two types, namely step up and step down transformers, they increase or decrease the level of AC voltage produced in the generator. Here, a step-up transformer is used to step up the voltage.

After this process, the power is distributed through the transmission wires which transmit the electricity over long distances. Here, the current passing through the transmission lines is of very high voltage ranging from 300 kV to 500kV. After reaching a junction, a step-down transformer is used to step down the voltage, which is very large and converts into a small voltage of 30kV to produce supply for the domestic applications. Let us understand what household electricity is, along with its consumption in detail.

The first one is the live wire which is made of copper and through which the electricity enters the appliances. The coating on live wires is generally red as depicted below.

The second one is the neutral wire which is also made of copper and is used to complete the circuit. A neutral wire allows the electrical energy to be fully utilised and if any energy is left, this neutral wire sends the remaining power back to the transformer. It is mainly created and set to assure that the residual current is easily going back to where it has come from. This is represented using the blue colour as depicted below.

The third one is the earth wire which is also made of copper and used to provide a path for the current flow from the device or an appliance to the ground in case of emergencies. This is represented using green colour as depicted below.

There is an important component called fuse box which consists of fuses or circuit breakers. It takes precautions if the excess amount of electrical energy enters the house. When a large amount of electricity enters, circuit breakers break the part of the circuit to cut the power supply. Later on re-switching, this circuit is formed back and the current can flow again.

The appliances are connected in parallel to the supply circuit since the working of any appliance can be independent of others, as shown in the below figure. 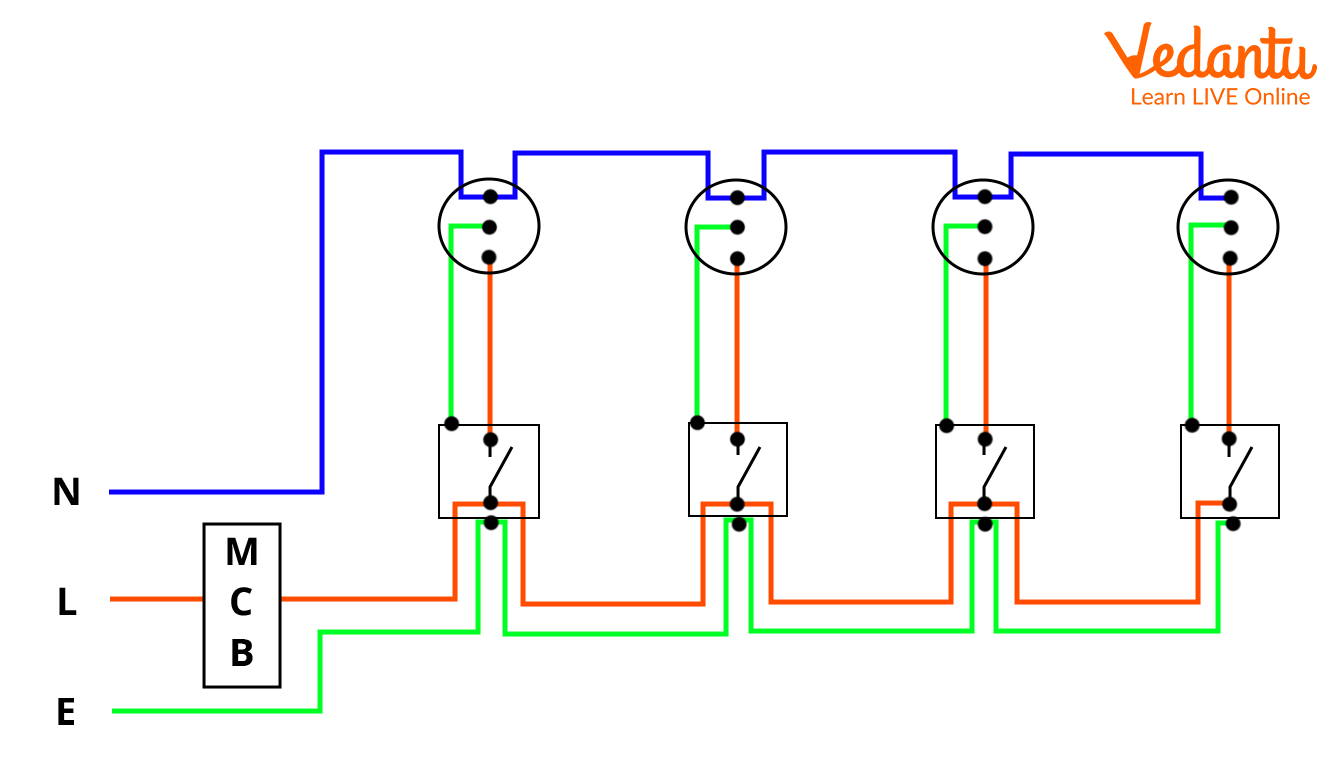 In the above figure, we can see how the live wire L, a neutral wire N, and earth wires E are connected to all the appliances at home. The live wire L enters the fuse which is here mentioned as MCB, i.e., miniature circuit breaker. It is used to replace fuses these days. AC can be transmitted over long distances without any need for complex infrastructure. Thus, it is used in our homes.

Different appliances use different amounts of energy based on their capacity. For example, using iron for an hour consumes 1000 watts of power. The average electricity cost per kWh in India is about 6.15 rupees. The cost depends on the average household electricity consumption in India. To calculate the amount of money that is to be charged by an appliance, we can follow the equation:

Let us solve a problem to understand the concept of household electricity consumption.

Example: A fan uses 1200 watts of power when switched on for three hours in a day. The consumption cost per kWh is 8 rupees. Find the amount that is to be charged from this fan.

No. of hours of operation = 3h

The total amount charged from this fan = The power in kilowatts x no.of hours of operation x cost per kWh

Therefore, the total amount charged by this fan as per the question is 28.8 rupees.

1. What is household electricity consumption?

The household electricity consumption is a term which is used to refer to the total energy consumed by all the devices or appliances at home. These are used to make the household work. They include fans, lights, ovens, iron, washing machines, TV, chargers, and so forth. Every device consumes a certain amount of energy which varies from device to device. To calculate the total energy consumed in a household, we just have to add all the powers consumed by each device that operates every day.

2. Why alternating current is used in home appliances instead of DC?

The alternating current is more efficient to travel long distances in the transmission lines. It can be easily converted from higher voltages to the lower ones using step-up and step-down transformers whereas DC has a requirement of complex circuits and infrastructure to transport longer distances. As transformers are used to convert the voltage levels of current, the DC does not work well with the transformers. Higher DC voltages are riskier and difficult to handle at the time of transmission and distribution.