Introduction to the History of Periodic Table

The periodic table is one of the most iconic and recognizable tools in the study of chemistry. It has been around for over 150 years, and its history is fascinating! Periodic table in general terms is the arrangement of chemical elements. So, these elements with similar properties can be grouped together.  In this article, we'll explore the historical development of the periodic table. We'll look at who discovered it, when they did, and what influenced their work. Many scientists worked on the periodic table formation, each one came up with little more modification. All the combined modifications lead to finally our well known modern periodic table.

The Periodic Table: Who Discovered it? When? What it Looked Like and What it Contained ?

The periodic table is a tabular arrangement of the chemical elements, organised on the basis of their atomic numbers, electron configurations, and recurring chemical properties. Elements are placed in specific groups in the table. A standard form of the table contains 18  groups and 7 periods.

The periodic table is a chart that shows how the chemical elements are related to one another. One of the periodic tables was created by Dmitri Mendeleev in 1869. Mendeleev's table was based on the idea that elements with similar properties should be grouped together. This made it easier to predict the properties of new elements that had not yet been discovered.

Over time, scientists have refined and expanded upon Mendeleev's original periodic table. Today's version contains 118 different chemical elements, each with its own unique set of properties. The periodic table is an essential tool for chemists and other scientists who study the behaviour of matter at the atomic level.

The periodic table was first proposed by Russian chemist Dmitri Mendeleev in 1869. He developed it in order to organise the known elements and predict the properties of new ones. His original table had gaps for missing elements, which he predicted would be discovered later. In fact, many of his predictions were correct: subsequent discoveries confirmed his predictions about the missing elements' atomic weights, boiling points, and other properties.

Mendeleev's periodic table has since been modified and expanded as new elements have been discovered or synthesised. The modern version includes 118 elements arranged in 7 periods and 18 groups (columns).

From its humble beginnings as a list of elements arranged by atomic weight, to its current form as a comprehensive tool for categorising and understanding the properties of matter, the periodic table has undergone a remarkable evolution over the centuries.

The earliest known version of the periodic table was devised by Russian chemist Dmitri Mendeleev in 1869. Mendeleev's table featured just 63 elements, arranged according to their increasing atomic weights. But it wasn't long before other scientists began adding to Mendeleev's work.

By 1914, German chemist Julius Lothar Meyer had extended the periodic table and by 1930, English physicist Henry Moseley had added some more elements.

But it wasn't until 1955 that the modern periodic table we know today finally took shape. That's when American chemist Glenn Seaborg and his colleagues at Berkeley Laboratory proposed adding 118 new elements to the existing roster of 106. These "superheavy" elements were created using nuclear fusion reactions, and they filled in all of the missing gaps in the periodic table up to atomic number 118.

Today, there are a total of 118 different chemical elements on the periodic table - including such familiar ones as hydrogen (H), oxygen (O), carbon (C), nitrogen (N), and iron (Fe). Each element has its own unique set of chemical properties that can be used to predict how it will behave in different situations. The periodic table is thus an essential tool for chemists, physicists, and engineers alike.

The periodic table timeline starts with the discovery of the first elements. In ancient times, people only knew about a few elements, such as gold, silver, copper, iron, and lead. Then, in the late 1700s and early 1800s, scientists started discovering more and more elements. By 1869, there were around 63 known elements.

This is when Dmitri Mendeleev comes into the picture. He was a Russian chemist who developed the first version of the periodic table in 1869. His table arranged the elements by their atomic weights (the number of protons in an atom's nucleus). He also left gaps in his table for unknown elements that he predicted would be discovered later. And indeed, many of these gaps were filled within a few years after he published his periodic table.

Since Mendeleev's time, scientists have made many improvements to his original periodic table. For example, they've rearranged some of the groups to better reflect similarities between elements of their electrons' configurations (the arrangements of electrons around an atom's nucleus). They've also added new groups for recently discovered elements..

Today, we continue to use and refine Mendeleev's periodic table timeline because it remains one of our best tools for understanding chemistry.

Key Concepts that Discussed During the Evolution of Periodic Table are:

1) Doberiener’s Triads: In 1800 a chemist Johann Dobereiner, the German chemist, observed similarities in the elements on the basis of their properties. He saw that there are groups consisting of three elements (triads) that have similar chemical and physical properties. In every group, the atomic weight of the middle element was half of the sum of the atomic weight of the other two elements. Properties of the middle element were also in the halfway of both the elements. Dobereiner called this grouping method the law of triads. Later on, it was found that this law was not true for every element and hence it was not successful.

2) Newland’s Octaves: John Alexander Newlands, the English chemist, gave the law of octaves after the failure of Doberiener’s triad in 1865. According to Newlands, elements can be arranged in ascending order of their atomic weights. He also said that in this arrangement every eighth element of a row had similar properties to that of the first element of the same row, depicting the octaves of music. Later this law was also dismissed as it was only true for elements of up to calcium. 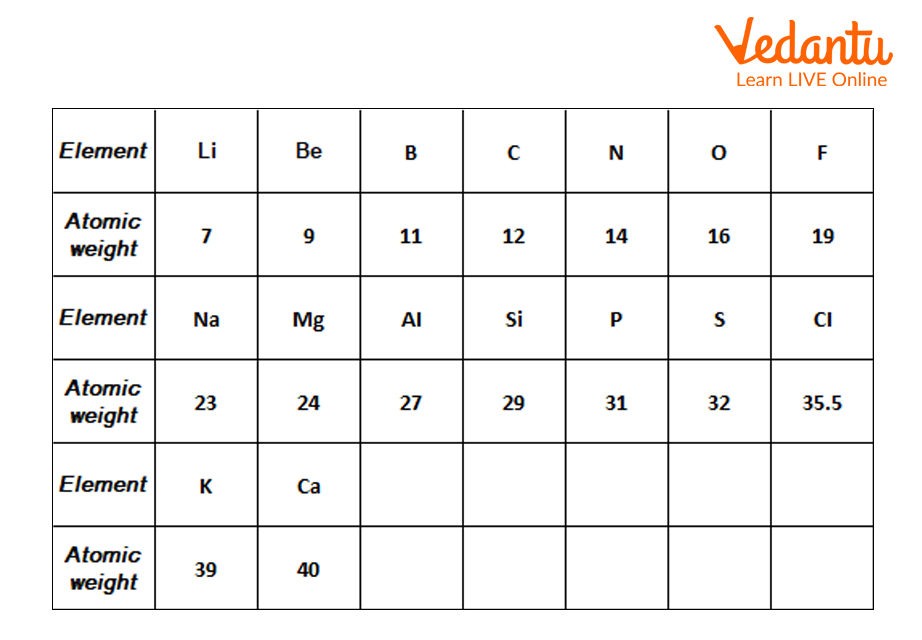 3) Mendeleev’s Periodic Table: It is observed that the real development in the periodic table took place after the development of Mendeleev’s periodic table. Mendeleev gave a law which states that “The properties of an element are the periodic function of their atomic masses”. He arranged elements in periods (horizontal rows) and groups (vertical columns) in the increasing order of atomic weights. The vertical column consists of elements that have similar properties. 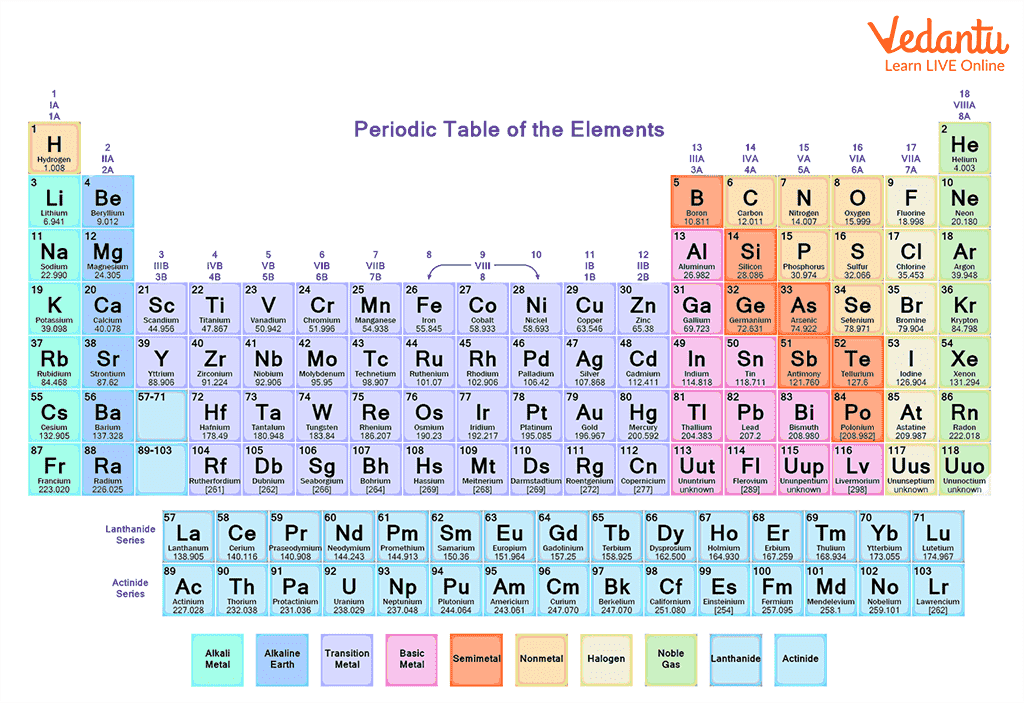 The periodic table is a chart that shows how chemical elements are related to one another. The original periodic table was developed by Dmitri Mendeleev in 1869, and it has been revised several times since then. The most recent version of the periodic table was published in 2016 by the International Union of Pure and Applied Chemistry (IUPAC).

The periodic table is constantly evolving as new elements are discovered and new insights into the nature of matter are gained. In the future, the periodic table may be expanded to include additional elements, or it may be rearranged to reflect new understandings of atomic structure. However, the basic layout of the periodic table is likely to remain unchanged for many years to come.

FAQs on Historical Development of Periodic Table for JEE

1. What is the periodic table?

The periodic table is a tabular arrangement of the chemical elements, organised on the basis of their atomic numbers, electron configurations, and recurring chemical properties. Elements in the same column (group) have similar electronic structures and tend to exhibit similar chemical behaviour.

2. How did the periodic table develop?

The periodic table was developed over centuries by chemists and physicists who were investigating the nature of matter and trying to organise it in a way that would make sense of its complexities. The first person to propose anything resembling a periodic table was Russian chemist Dmitri Mendeleev in 1869, although other scientists had proposed similar ideas earlier. Mendeleev's table arranged elements in order of increasing atomic mass and used gaps in his arrangement to predict undiscovered elements. British scientist Henry Moseley later refined this approach by using X-ray data to determine more accurate atomic masses, which led to an even more precise Periodic Table.

3. Why are there groups (columns) on the periodic table?

The columns on the periodic table are called groups. Elements within a group typically have similarities in their chemical behaviour due to having similar outermost electron configurations. For example, all of the elements in group 1 are highly reactive because they only have one valence electron in their outermost energy level; similarly, all of the noble gases in group 18 are unreactive because they have full valence shells with eight electrons each.

4. Why do periods (rows) exist on the periodic table?

Periods exist on the periodic table because when you move left to right across a period, the atomic number increases by one but electron configuration remains constant until you reach a new period. As you move down a period, however, new shells are added so that each element has more protons than those before it.