What is a Domestic Electric Circuit?

Electricity is the main source of power for many appliances like refrigerators, irons, washing machines, fans, and many more. Electricity is supplied to these appliances through domestic circuits which have a variety of components and it is important to understand their working. There are various types of switches, wires, connections, and circuits used for this purpose. In this article, we will have a look into the domestic electric circuit in detail.

Components of a Domestic Electric Circuit

We know that power is generated in power plants and that power is distributed from the plants via enormous transmission lines supported by tall towers. These transmission lines help to transport a large amount of electricity to substations. Small amounts of current are distributed from substations to homes via distribution lines. The main supply, also known as ‘mains’, receives and distributes power throughout the home via several types of wires. Currents travel via the cables into the devices or appliances at home, which operate as expected.

Household systems have different kinds of wiring and a variety of components are used in the household circuit. Electricity from the power generation plants comes to the substations and then to our houses through 2 wires: one live wire and a neutral wire. The live wire is usually of red colour insulation and the neutral wire is of black colour insulation. The potential difference between the live wire and the neutral wire is pre-decided. In India, a potential difference of 220V is kept.

These two wires pass into the Main fuse box or the Miniature Circuit Breaker (MCB). From this fuse, the wires are passed into the electric meter, which records the electricity consumed by the household in kilowatt-hour (kwh). Then from the meter, the wires pass to the electric wiring boards and then the wires are distributed to different devices when connected to a switch. The electric board connections are also made using the same three wires mentioned below.

Three types of wires are used in a household circuit. These are as follows:

This wire is green and is connected to metal plates placed on the Earth at some depth near the house for safety purposes. This wiring is done to prevent shock when a leakage happens in the metallic body of any electric appliance.

As discussed already, the live wire is red and is the positive conductor. It helps to break the circuit when excess current is flowing through the domestic circuit.

The neutral wire is black and it is the negative conductor in the household electric circuit. 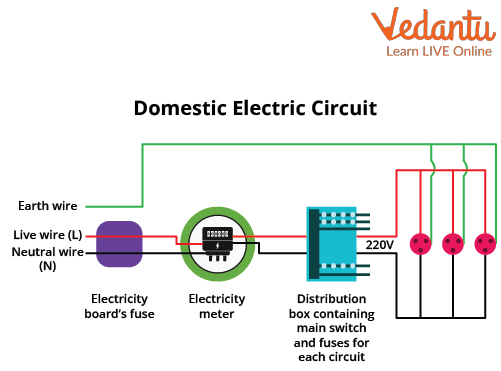 When the neutral wires come in contact with the live wire, a short circuit happens. Short circuits are dangerous as they may cause a fire in the electrical circuits used. When the insulation of both wires gets torn and they come in contact with each other, current flows through them without much resistance. This heats the wires and may cause a fire.

To prevent fires and other haphazard, fuses and MCBs are used. 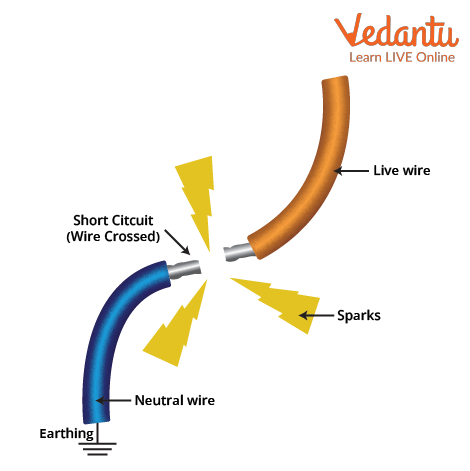 The fuse through which the wires pass to the electric meter is a safety device and it protects the circuit and the appliances from fluctuation, overloading, or short-circuiting. Fuse has a low melting point and a high resistance to voltage. When an overload current, high voltage, or fluctuating current goes through the circuit, the fuse helps to break the circuit. When heated, it melts and destroys the circuit's connection, keeping additional components/circuits from burning. As a result, as a safety device, fuses are an essential aspect of household wiring. 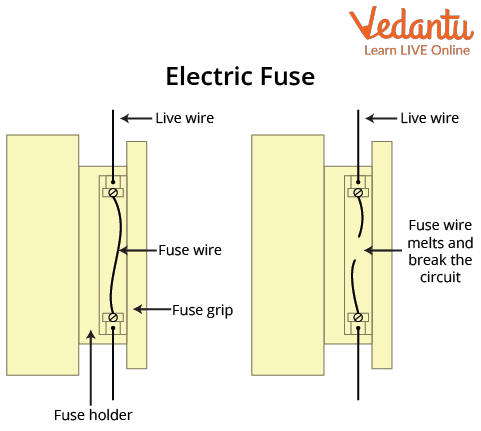 Fuses were used for a long time before the introduction of Miniature Circuit Breakers or MCBs. MCB is a type of electronic switch that operates on its own. By identifying the high quantity of current flow in the circuits, it can discover a problem occurring inside a circuit. If there is a higher quantity of power in the loop than required, it can break the loop at any time.

Fuse boxes are also utilised in place of MCBs because they do the same job. However, MCBs are a better choice as they must be reset by users before they may work again. An MCB diagram is given below. 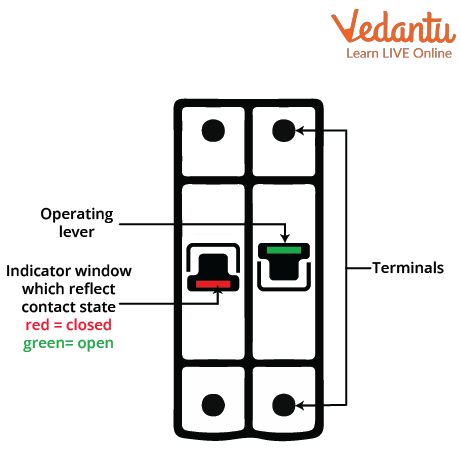 Domestic electric circuits are the circuits that are used in homes to supply electricity throughout our houses. They are used to power a variety of household appliances and these circuits light up our homes. Three wires are used in domestic wiring. The green wire is the earth wire, the red wire is the live wire, and the black wire is the neutral wire. The electric meter is a device used to measure the amount of power consumed.

The circuit might be overloaded when several appliances are used at the same time and it is called ‘overloading’. When the live wire and the neutral wire come in contact, a short circuit happens and the current flows without much resistance. To prevent overloading and short circuits, fuses and MCBs are used in the domestic electric circuits and electricity is distributed safely.

1. Which two circuits are used in domestic wiring?

2. Why is AC used instead of DC for household electricity?

Simply put, AC voltage can convert voltage levels with simply a transformer, making it significantly easier to transmit across long distances than DC, which requires more complicated electrical circuitry to convert. Currently, there are not enough gadgets that can work with DC voltage for it to become commonplace and the economic and practical effects of switching completely to DC power remains unknown. AC voltage continues to deliver the most convenient and reliable electricity, allowing people to go about their daily lives with ease.