Addition of Ammonia and Ammonia Derivatives for JEE

Ammonia and Its Derivatives

Ammonia is a nitrogen-containing compound covalently bonded to three hydrogen atoms, with one lone pair of electrons. It is a colourless pungent-smelling gas. Ammonia can be found everywhere in air, water, and soil. The chemical formula of ammonia is NH3. Ammonia can be manufactured commercially in the industry by the Haber process and can be produced naturally by the decomposition of organic matter, by the action of bacterial activity. The ammonia molecules have a trigonal geometry with a bond angle of 107.8 degrees. The structure of ammonia is according to the valence shell electron pair repulsion theory (VSEPR).

Aldehyde and ketones react with the number of ammonia derivatives in a weakly acidic medium to form compounds containing the C=N group. The reaction is reversible and is catalysed by acids. The equilibrium favours the product formation due to the rapid dehydration of the tetrahedral addition product.

Addition of Ammonia and its Derivatives to Aldehydes and Ketones

During this process, the electrons of the carbon-oxygen double bond are completely transferred from carbon to oxygen atom, the carbon hybridization changes sp2 to sp3 and a tetrahedral alkoxide intermediate is formed. This intermediate then absorbs a proton from the solvent (usually H2O) or the reagent to produce the electrically neutral addition product. The entire process involves adding Nu and H across the carbon-oxygen double bond.

Addition of Ammonia and Ammonia Derivatives

Addition of Ammonia and its Derivatives Mechanism 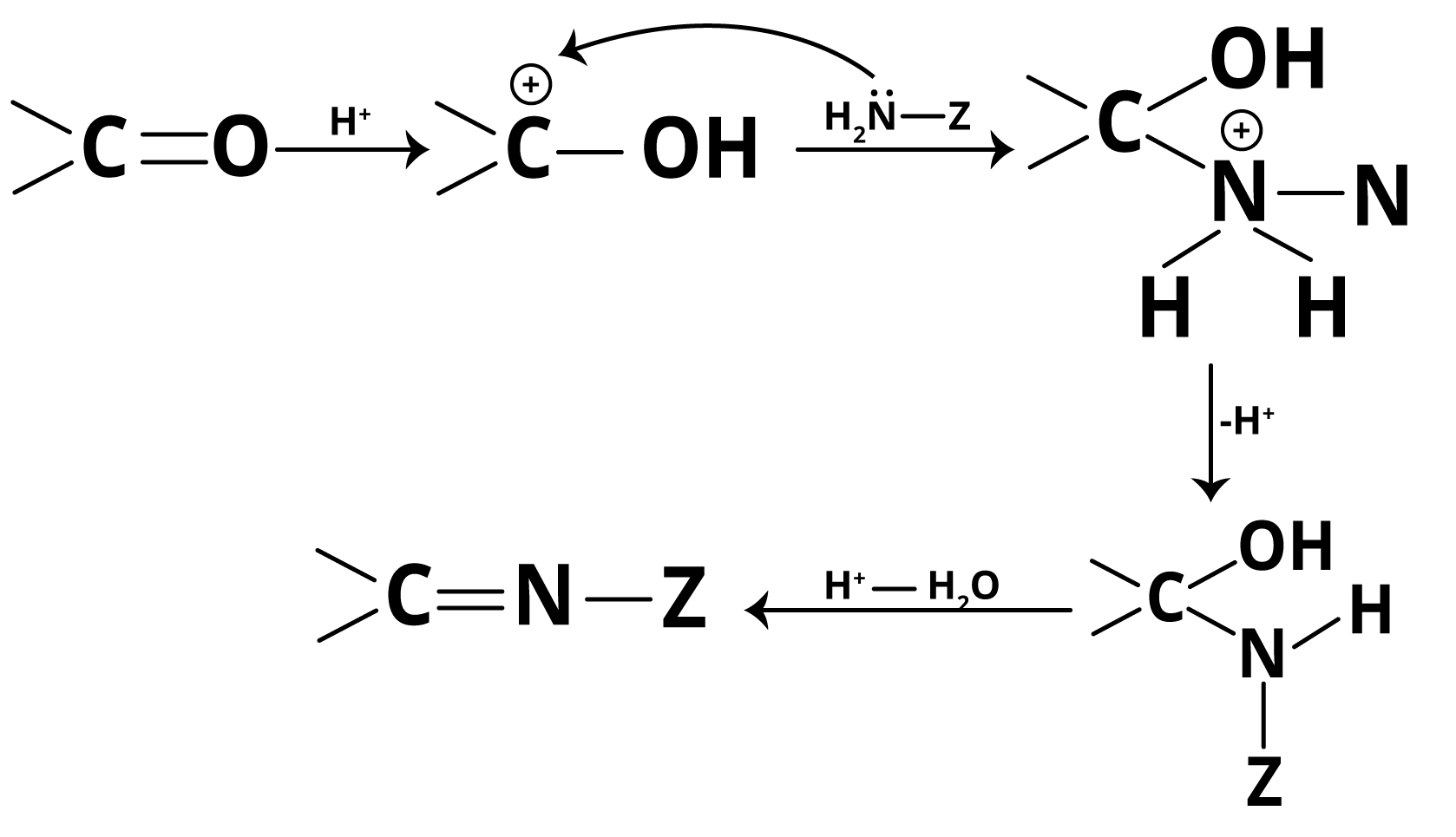 Addition of Ammonia and its Derivatives Mechanism

If the medium becomes too acidic, the ammonia derivatives will form their respective ammonium salts due to their basic nature. SInce there is no longer a lone pair of electrons on the nitrogen atom, these ammonium salts are no longer nucleophilic, and thus the reaction does not occur. However, if the medium is only slightly acidic, the carbonyl group will not be protonated.

As a result, weak nucleophiles such as ammonia derivatives will be unable to react because the electron-deficiency (or +ve charge) on the carbon atom of the carbonyl group will not be increased. In other words, the reaction does not take place. As a result, an optimal pH value is required to carry out such reactions. A pH of around 3-5 is usually maintained.

All of the above-said derivatives, such as oximes, hydrazones, 2/4-dinitrophenylhydrazones, etc., are well-defined crystalline solids with distinct melting points. As a result, they are used to identify and characterize aldehydes and ketones. Furthermore, as these derivatives can be decomposed by boiling with dilute mineral acids to regenerate the original carbonyl compounds, they are used to purify aldehydes and ketones. 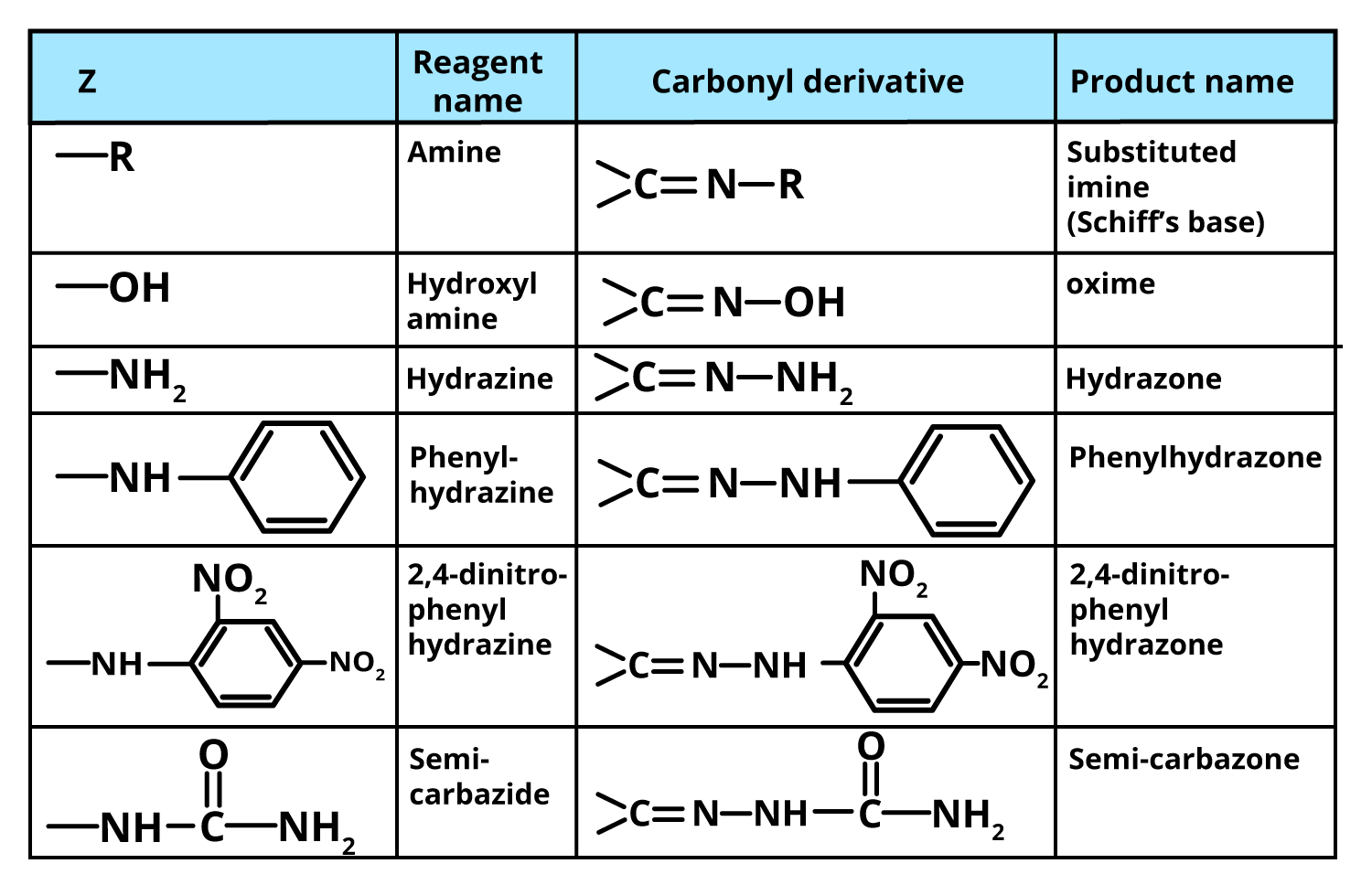 Some Reactions of Aldehydes and Ketones with these Ammonia Derivatives

Nucleophilic addition reactions occur between aldehydes and ketones. The mechanism of nucleophilic addition is as follows: a nucleophile attacks the electrophilic carbon atom of the polar carbonyl group of aldehyde and ketone from a direction roughly perpendicular to the plane of carbonyl carbon's hybridised orbitals. Carbon hybridization changes from sp2 to sp3, producing a tetrahedral alkoxide intermediate. To produce the electrically neutral product, this intermediate absorbs a proton from the reaction medium. As a result, the Nucleophile and H are added across the carbon-oxygen double bond.

FAQs on Addition of Ammonia and Ammonia Derivatives for JEE

1. How is ammonia produced commercially?

Haber's process is a commercial or industrial process for producing ammonia. This method produces ammonia gas from nitrogen and hydrogen using an iron catalyst at 400-450 degrees celsius and 200 atmospheres pressure on hydrogen gas. This is an exothermic reaction. The Haber process extracts nitrogen gas from the atmosphere and combines it with molecular hydrogen to produce energy.

In the compressor, a 3:1 mixture of hydrogen and nitrogen gases are taken. It is then compressed to about 200 atm pressure and passed through the catalyst chamber over the heated catalyst. The temperature of the mixture is kept between 400 and 4450 degrees celsius.

2. Why do aldehyde and ketone behave differently in reactivity?

Difference in reactivity of aldehyde and ketone is the due presence of hydrogen which is attached to the carbonyl group of aldehyde whereas ketones lack this hydrogen. Due to the presence of that hydrogen atom, aldehydes are very easy to oxidise. Ketones are resistant to oxidation because they lack that specific hydrogen atom, and only extremely strong oxidising agents, such as potassium manganate (VII) solution (potassium permanganate solution), can oxidise them. They do it, however, by breaking carbon-carbon bonds.