Class 3 is the right stage to introduce the concept of money. Students will learn about rupees and paise in Chapter 14. These new concepts will become easier to understand by referring to Rupees and Paise revision notes. These notes have been composed by the top subject experts to benefit your study.

These notes will explain all the concepts related to money and will offer worksheets to practice. You will learn to identify the units of money prevalent in India and will enjoy doing the activities in this chapter.

1. How much money is represented by a given figure below? Ans: The given money in the figure is One Hundred One Rupees total.

2. Use the notes and coins to show the following amounts of money

Ans2. To show Twenty-six Rupees we would need a 20 Rupee Note, a 5 Rupee Note and two 50 paise coins. Given figure below shows the required notes and coins. To show Two hundred one Rupees we would need a 200 Rupee Note and a 1 Rupee coin.

Given figure below shows the required note and coin. A two hundred note and a coin 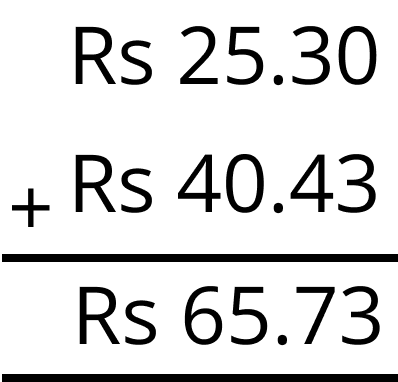 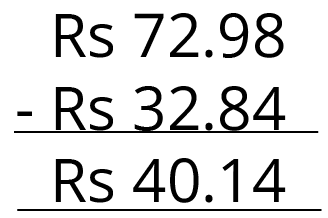 Hence, Rohan would pay an amount of Rs1000 to buy a shirt and a pair of shoes together.

Q2. How much money is represented by a given figure below? 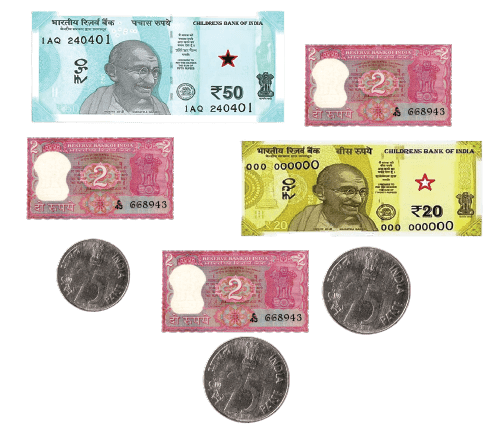 How much is the given figure?

Q3. Sakshi and her friends went shopping. She purchased items for Rs 58, Rs 37 and Rs 22. Sakshi had a hundred-rupee note. How much money does she require to borrow from her friends to pay the bill?

Q4. This train goes from New Delhi to Mumbai. On its way, it stops at Jaipur, Ahmedabad and Gujarat stations.

(i) Find the distance:

a) From Jaipur to Mumbai

b) Between Jaipur and Gujarat

c) From Ahmedabad to Mumbai

d) Between Jaipur and Ahmedabad

e) From Gujarat to Mumbai

(ii) Find the cost of tickets:

a) Rohan is going from New Delhi to Ahmedabad. What is the cost of his ticket?

b) Sumit has to go from New Delhi to Gujarat. How much does he pay for the Ticket?

(c)Arun, Praveen and Shubham are going from New Delhi to Jaipur. What amount will be paid by them for three tickets? A 50 note is given for the tickets. How much money will they get back?

This chapter comprises various activities and exercises that explain the different concepts of money to the Class 3 students. They will learn to differentiate between rupees and paise through easy examples. They will also learn to use these concepts to solve mathematical problems and answer questions.

The importance of this chapter can be summarised in the following points.

Here is a list of benefits you can add to your study schedule by downloading the free revision notes PDFs from Vedantu.

By studying the Rupees and Paise summary given for all the sections, you can easily comprehend the concepts of money and learn how to calculate the value of items.

Resolve all your queries related to money rupees and make your preparation smoother. You will become capable of completing your preparation before an exam by using the revision notes as a reference.

Use the simpler explanation of monetary units and learn how to convert 30 Paise in Rupees. Find out how to perform the addition of rupees and paise in different forms.

Find the money Chapter for Class 3 worksheet and solve the questions to practice.

Download the PDF file for free and learn how to convert rupees to paise worksheets. Develop your mathematical skills and understand the concept of money easily. Prepare for the exams by using these revision notes as references.

1. How can I calculate 1 rupee is equal to how many paise?

2. Is it necessary to learn what 1 paisa means?

The formation of 1 rupee occurs when you add 1 paisa 100 times. It means you must understand what ‘1 paise is equal to’ for finding the value of bigger coins and notes.

3. Are the revision notes and worksheets available for free download?

All the worksheets and revision notes for this chapter can be downloaded for free and used at convenience. All you have to do is visit our website and follow the instructions to download.