Class 3 is an excellent phase to introduce various kinds of mathematical concepts. Students learn from their textbooks and often find the need for proper study material with explanations. This is where Smart Chart revision notes prepared by the expert teachers of Vedantu will be the best bet.

The revision notes will cover all the aspects of this chapter including making colourful charts from available information. You will find learning how to extract information from pictorial representations becomes easier. Get these free Smart Chart revision files today and get started with your preparation.

Example: Chetan went to the park and collected different flowers for his mother.  All flowers collected by Chetan are known as data.

Solved Example 1: Krishna collected the data on chocolates that need to be donated to an orphanage from his class and represented them in tabular form.

Ans: Below is the representation data in tabular form

Ans: In the below table we represent the data of Kanika using the tally marks.

Solved Example 4: Doctor Ranjan suggested Krish's grandmother eat as many apples as she can because she is weak for at least for 6months. Dr Ranjan also suggested Krish note the no. of apples eaten by her grandmother every month for around 6 months to track her data.

Below the graph is a line graph that represents the number of apples eaten by Krish's grandmother each month (for 6 months). 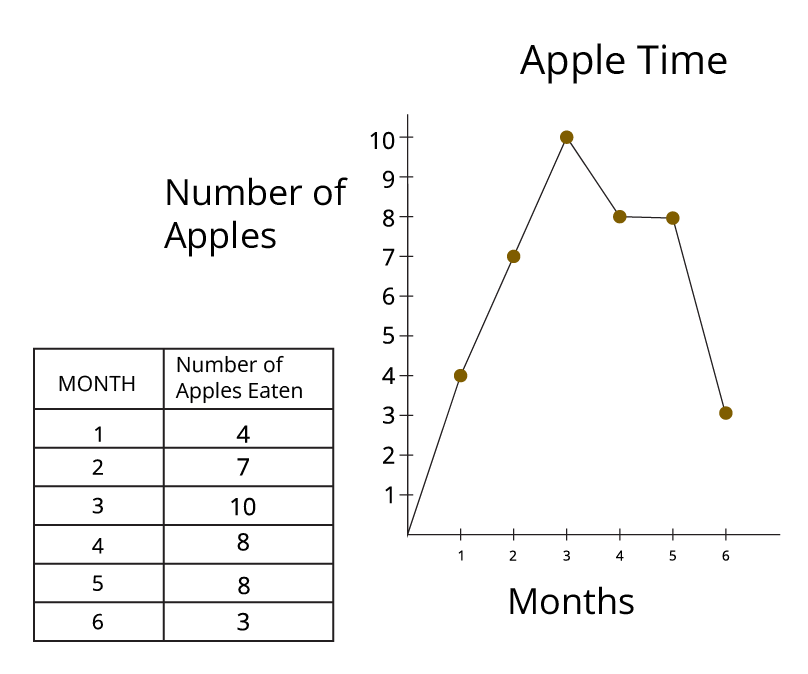 Line graph between No. of apples vs Months

Solved Example 5: Surya conducted a Survey on how many people consider the below fruits as their favourite fruit: Bananas, Apples, Mangoes, Grapes and Oranges. In the survey, he got the data as mango -20, apple -60, grapes-80, bananas-100 and oranges-45. Represent the above data in both vertical and horizontal bar graphs.

Ans: Below is the vertical bar graph representation of the data of the survey conducted by Surya. 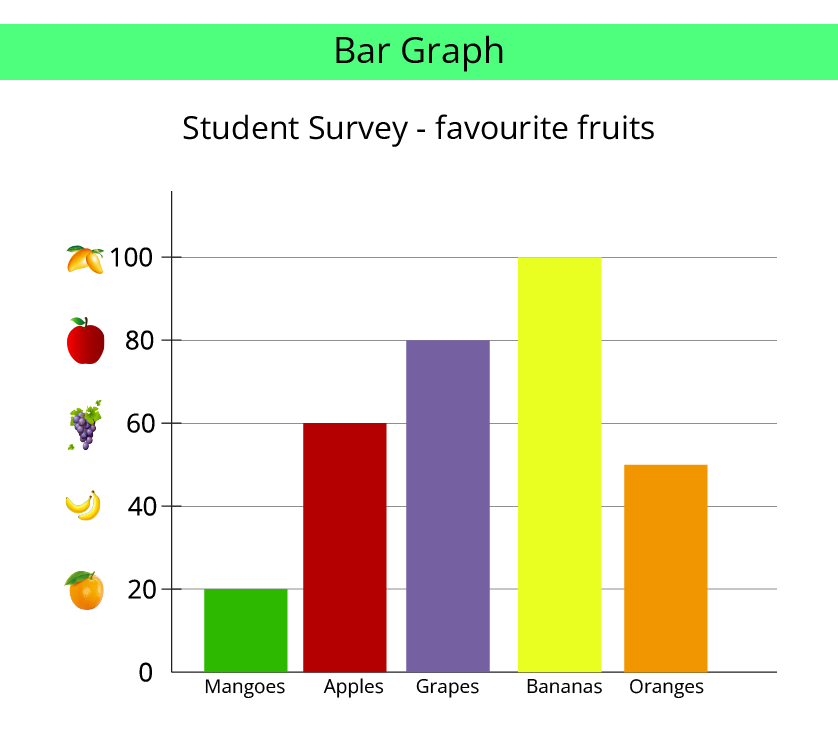 Bar graph between student vs friuts

This is the representation of the above data in the form of a horizontal bar graph. 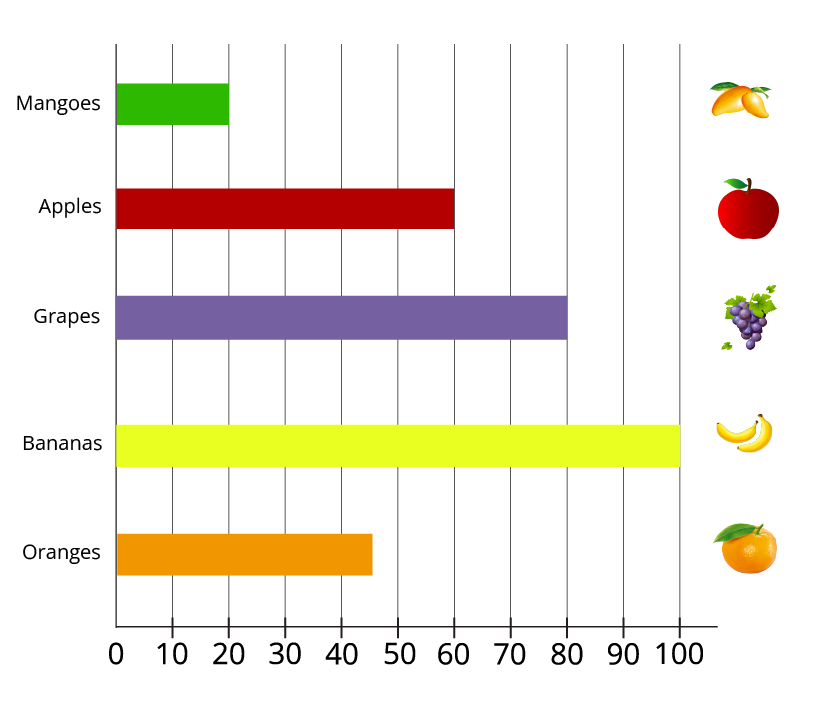 Bar graph between fruits vs No. of student 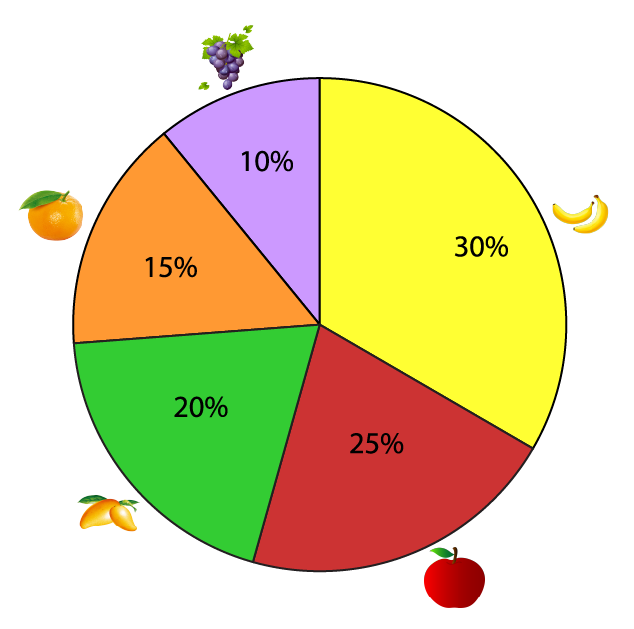 2.  Given the following table shows the most liked breakfast for children.

Answer the following questions on its basis:

i) Which is the most liked breakfast?

ii) Which is the least liked breakfast?

iii) How many children liked both dosa and Idli?

iv) How many children liked only Bread and Jam?

The syllabus of Class 3 Maths is unique in terms of creating a conceptual foundation of various mathematical concepts. The importance of Chapter 13 can be understood from the following points.

Studying Smart Charts Class 3 will help make students better in thinking logically and solving problems accordingly. It is formulated to create a strong foundation for formulating tables, using data, and extracting information. Hence, the students will be introduced to the basic level of statistics at a young age.

Now that you have understood the importance of this chapter, here is how Vedantu can deliver the best results with its revision notes and worksheets.

As mentioned earlier, you will learn the definition and use of smart charts for the first time in Class 3. The revision notes for this chapter will be the ideal study material to refer to grab hold of the concept.

All the doubts rising in your mind can be resolved by using the simpler explanation of concepts in these revision notes.

Children will also get excellent support in studying these basic concepts related to statistics and other advanced mathematical operations. They will learn how to input data in charts for objects, things, activities such as dice throwing, etc.

The revision notes will also help you by getting smart with charts. Learn how to differentiate between various objects and their eligibility.

Getting Smart with Charts Has Become Easier

Download the revision notes today for free and check what do we see on the road. Prepare the answers in the best way possible to save time and score better in the exams. Visit our website to download the PDFs for free and find other related study materials.

1. Why is getting Smart with Charts easier with Vedantu?

The experts compile answers and explain concepts of Maths chapters using a simpler language. They also follow the CBSE guidelines to ensure the explanation matches the standard of the Class 3 students.

2. How can you use revision notes to make smart charts?

Experts will explain how to make tables using the information embedded in the pictures. Focus on making tables. You will also learn how to answer questions based on the Smart Charts summary.

3. How can I prepare Chapter 13 smart charts before an exam?

The preparation of Chapter 13 Smart Charts becomes easier with Vedantu’s revision notes and worksheets. Practice worksheets and take a glance at the concepts in the notes before an exam.