Verified
122.2k+ views
Hint:
In a fcc lattice there is one constituent particle at each corner and one at the centre of each face. The number of nearest neighbours is called coordination number. 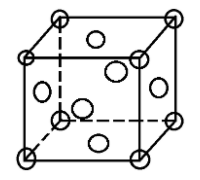 In an fcc structure atoms are packed as closely to each other as possible and the 4 atoms occupy 74% of the volume of the unit cell. It has unit cell vectors a = b = c and interaxial angles α = β = γ = 90$^{\circ}$
In an fcc lattice the face centre atoms are the nearest atoms and one corner atom is surrounded by 4 faces in the x-plane, 4 faces in the y-plane and 4 faces in the z-plane. So, every corner atom is surrounded by (4 × 3) = 12 face centre atoms. Since they are the nearest they form the coordination number.
Also if we consider the atom at the face centre, it is surrounded by 4 corner atoms of its own plane and the 8 adjacent face centred atoms (4 from above and 4 from below). This also makes the coordination number to be 12.
Hence, the coordination number of an fcc lattice is 12.

So, the correct option is (A).

Note:
While imagining the structure of the fcc unit cell, always be precise regarding the position of the atoms. Also remember that there are 4 faces associated with the 3 axes.
Read More

Vedantu Improvement Promise
We promise improvement in marks or get your fees back. T&C Apply*
Recently Updated Pages
What is electrolysis A solution of rmCuSrmOrm4 is electrolysed class 12 chemistry JEE_Main