Triangle and Parallelogram Law of Vector Addition for JEE

An Introduction to Vectors

A vector is a term which is coined to represent any quantity that has both direction and magnitude. It is taken after the Latin word where a vector means a Carrier. That means a vector needs to carry a quantity from one point to another. For example, if a vector is carrying a point D to a point E, then it is represented as $\vec{DE}$

An important point to be noted is, that these vectors cannot be added algebraically that we use to generally add things in Mathematics. This ought to be added in a geometrical way where even the direction of a vector matters a lot. A vector is generally represented as an arrow with a head and a tail. To add these vectors, we use triangle and parallelogram laws of vectors and we call the result after adding it “Resultant”.

Let us understand and know the different ways adopted for the addition of two vectors.

This is a kind of vector addition where we adopt the triangle law. Triangle Law states that if there are two vectors named $\vec{D}$ and $\vec{E}$ which are marked as DE and EF on the vector plane, where the head of the D vector touches the tail of the E vector, then the addition of these two vectors is the resultant vector $\vec{F}$ represented as DF. 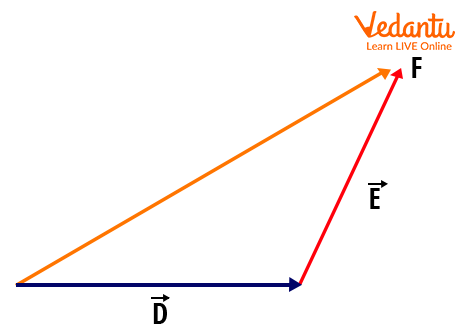 The Triangle Law of Vector Addition

If the angle between the resultant vector and the vector D is ɸ, then there is this formula stating the relationship between the angle $\theta$ and the magnitude of vectors.

Let us demonstrate and understand this law.

Say, $\vec{D}$ and $\vec{E}$ are the two vectors which are also the two adjacent sides of a parallelogram drawn from a point outward, then the diagonal drawn from the same point is the resultant of these two vectors as shown in the figure. 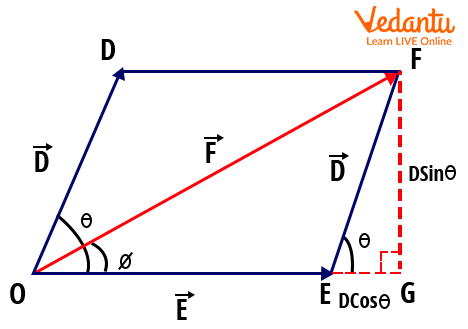 The Parallelogram Law of Vector Addition

Substitute these values in the above equation, and we will get

Therefore, OF can be written as

To find the angle between the resultant and the vector $\vec{E}$, which is assumed as ɸ, we use the trigonometric operation tanɸ in the triangle OEG.

The above mentioned is the formula of parallelogram law of vector addition.

Let us look into some solved examples on the triangle or parallelogram law of vector addition.

1. There are two vectors of magnitude 3 units and 4 units between which the angle is 60o. Find the magnitude of the resultant vector using the triangle law of vector addition.

We know the relation from the above diagram in the article,

The angle between the resultant and the vector E is 17o

FAQs on Triangle and Parallelogram Law of Vector Addition for JEE

1. Explain the law of vector addition and the limitations in choosing the type of vectors in addition.

If two vectors in a vector plane are represented both in magnitude and direction as the two adjacent sides of a triangle, then the third side of that triangle becomes the equivalent resultant after addition.