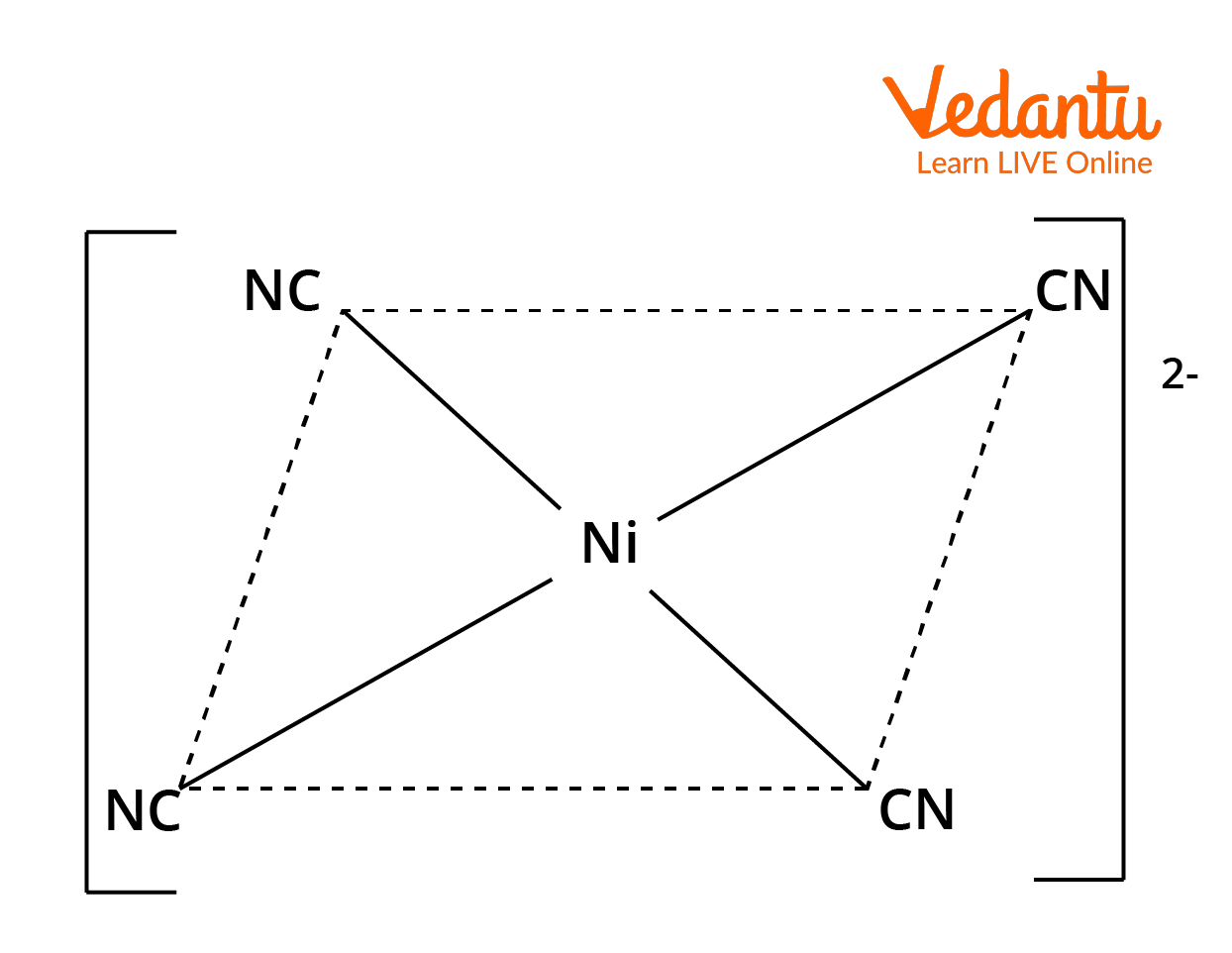 In this category, we shall consider the nickel complexes in which the coordination number of the metal ion is 4. The typical example is offered by [Ni(CN)4]2-.

The Nickel (II) ion has 3d8 as its outer electronic configuration, and according to Hund’s rule of maximum multiplicity, it will have two unpaired electrons, as shown in image 2. Depending upon the type of hybridization involved, there are two probable ways in which the complexes of Nickel with coordination number 4 that may be formed. If the complexe involves 4sp3 hybridization, it would have a tetrahedral structure. If, on the other hand, the complex involves 3d4sp2 hybridization, it would have a square planar structure.

For the formation of a square planar structure through dsp2 hybridization, one of the 3d orbitals should be empty and available for hybridisation. This is possible if the unpaired d electrons are paired up with the help of energy made available by the approach of ligands, thereby making one of the 3d orbitals empty. There would thus be 0 unpaired electrons and the complex would be diamagnetic.

We know from experiment that the complex ion [Ni(CN)4)2- is diamagnetic, indicating that the hybridisation involved in this case is 3d4sp2 as represented in image 2. Consequently, the structure and shape of the complex would be of square planar hybridization. The empty hybrid orbitals of cyanide ions to form metal ligand coordinate bonds, as shown in the image. The dotted arrows represent the electron pairs donated by the CN- ions.

The splitting of d orbitals in the square planar complexes can be understood by gradually withdrawing two ligands lying along the Z axis from the octahedral complex. 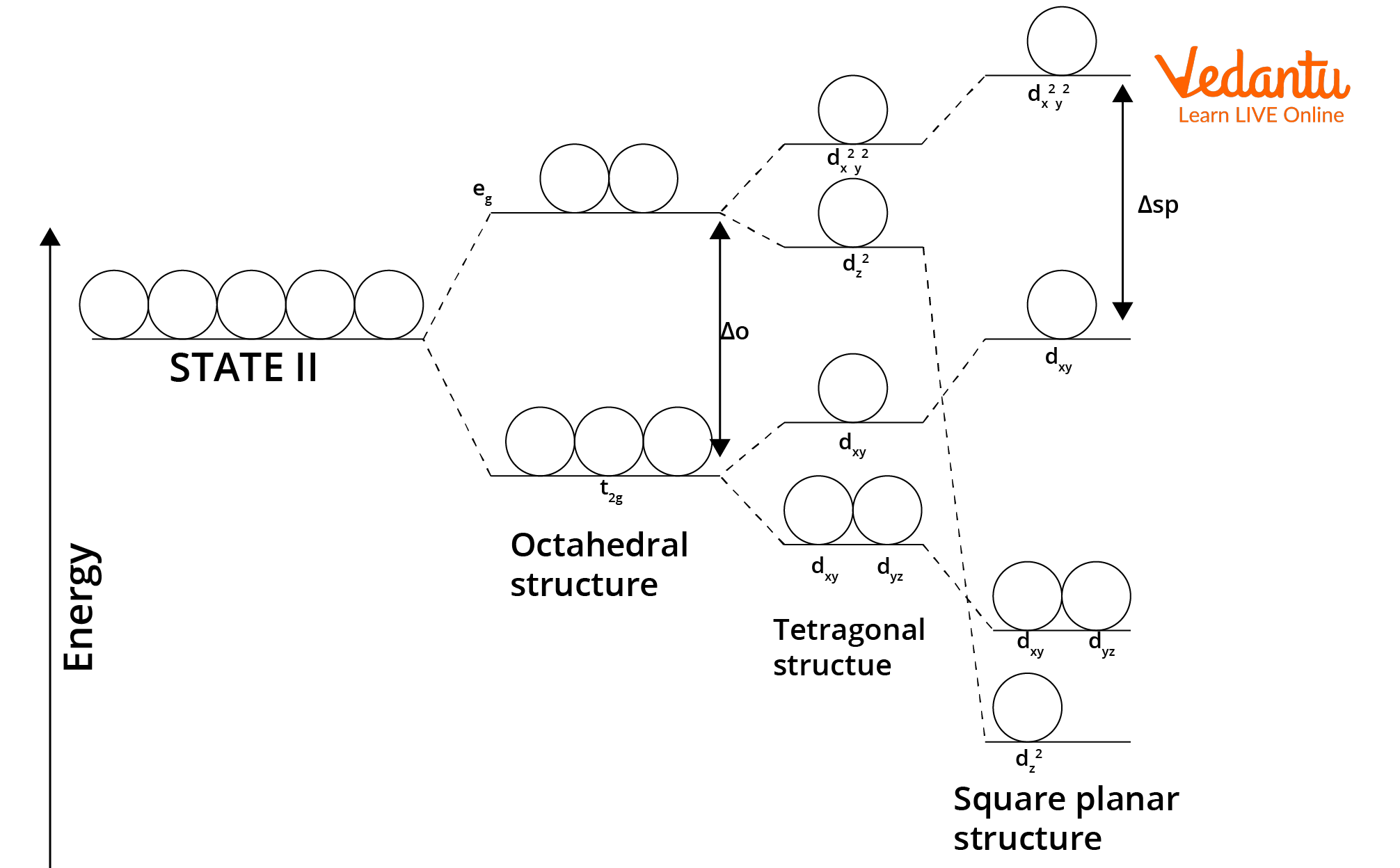 The electronic distribution in the metal will not be symmetrical because of an orbital which is only half filled (either the $d_{x^2 - y^2}$  or $d_{z^2}$). If it is $d_{x^2 - y^2}$  orbital, then the nucleus of the metal is less affected by the ligand field along the x and y directions than along the z direction. Again, if the ligands are considered to be situated at the corners of a regular octahedron, those in the XY plane will be more attracted than those along the z axis. We also came across that which complex has square planar structure and also about the d orbital used in square planar complex.

This asymmetrical distribution of electrons thus results in four equivalent bonds (shorter) of one kind and two equivalent bonds (longer) of another kind in an octahedral field. If it were the $d_{x^2}d_{z^2}$ orbitals, which contain one unpaired electron, the exact opposite would happen, and we would get two shorter and four larger bonds in the octahedral complex.

The square planar complexes are thus a special case of the octahedral complexes when two bonds are extended too much, resulting in an unsymmetrical electronic distribution on the metal.

Square Planar complexes are not optically active. This is because all the ligands and the central metal atom lie in the same plane. The molecule has a plane of symmetry (the plane of the molecule is the plane of the symmetry) and this cannot exhibit optical isomerism. One such compound, which has, however, been resolved into two forms, is shown in the image. Generally, square planar complexes do not show optical isomerism since they have no plane of symmetry. 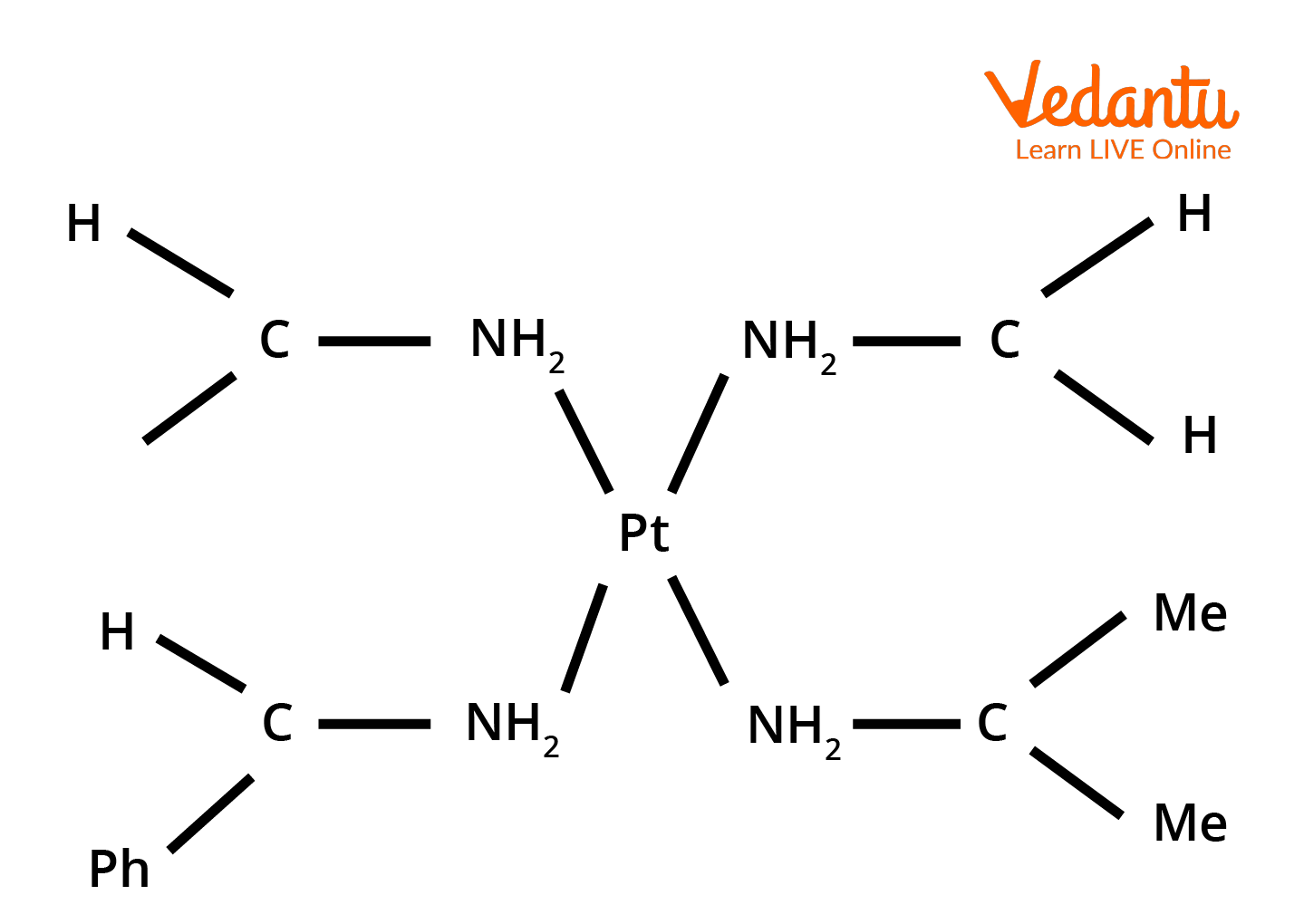 2. Which complex has a molecule of Square Planar shape  out of the following?