In our lives, there is a prominent usage of pulleys in many industrial types of machinery and marine equipment where there is an essential need of transferring heavy objects and pulling heavy weights. These have the mechanical advantage of applying heavy forces on the objects. A typical pulley looks like a wheel which is compacted on a shaft for the movement of the rope tied to it.

A pulley's operation method is straightforward and can be easily apprehended. Before the usage of any pulley, it is presumed that the weight of the pulley and the weight of the rope is not taken into consideration. Only the weight of the load block which is attached to the pulley is considered and calculated. Here, the pulley and the rope are in contact with each other, so there must be friction present between those two objects. But we assume that there is no loss of energy due to that friction and we also assume that the rope is not stretchable. Let us dive into the concept of what a pulley is, the pulley system including the movable pulley’s mechanical advantage and pulley examples.

In essence, pulleys are divided into three types on the basis of the movement of the pulleys and the structure of the pulley system with a certain number of pulleys operating in it. They are:

A movable pulley system consists of a pulley whose axis of rotation is not constant. When there is a combination of fixed and movable pulleys mounted together, then the system of pulleys is defined as a compound pulley. Let us learn the main concept of a single movable pulley and pulley examples in detail. 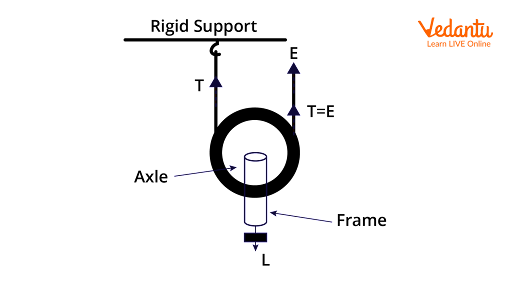 Therefore, the mechanical advantage of the above shown mechanical pulley is given by the equation,

Where at the equilibrium position the forces acting on the block and the tension in the string remain with a constant ratio.

As a single movable pulley is operated with two ends of the same rope, so it has a mechanical advantage for the two. Let us understand the movable pulley concept through example problems.

Examples 1: Find the mechanical advantage of a movable compound pulley shown in the below figure whose mass of the load is 40kg and the force applied to lift the load is 200N. 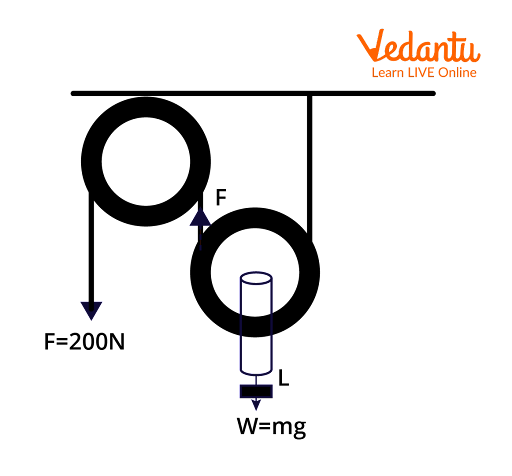 Given that, the Mass of the load attached to the pulley is, m = 25kg.

Example 2: In a pulley system, given that the mechanical advantage = 4 and the Effort applied is 25N. Find the mass of the load in the system.

This is an example of a movable pulley.

Therefore, the mass of the load is 10kg.

We discussed what a pulley is and how a single movable pulley works. We described the mechanical advantage of the single movable pulley with its formula and pulley examples. The main use of pulleys is that they make lifting and transferring things easier. These are widely used in various applications and the use of pulley is vital in marine and shipping operations too.

1. What are the applications of a pulley in our daily lives?

The use of pulleys makes a wider impact on various applications which have an operation of lifting weights. This pulley system is used and regularly seen in borewells where the water is filled in a small bucket by passing it through a rope fixed on a pulley. In many exercise equipment, there is an application of pulleys in machinery also. These are used in elevators, construction procedures, flagpoles, cranes and in escalators. A pulley is a simple and vivid machine that makes many things easier for humans.

2. What are the types of pulley systems?

There are three types of pulley systems which are prominent and widely used in all the applications of pulley systems. These are fixed pulley, movable pulley and compound pulley. Fixed pulleys are those whose axis of rotation remains constant as it is fixed to the support in the system. In a movable pulley, the axis of rotation is not constant and the pulley is attached to the block part of the system. Whereas, the compound pulley is the combination of both the fixed and movable pulleys.