Oxidation Potential and Number for JEE

Electrochemistry is a sub-field of chemistry related to the study of the relationship between electrical energy and chemical changes. In  galvanic cells, when two electrodes are immersed in their respective ions, one electrode (anode) tends to oxidize and the ion on the other electrode (cathode) tends to accept electrons. This tendency to lose electrons (oxidation) or acquire electrons (reduction) is called the electrode potential.

The tendency to lose  electrons is measured with the help of oxidation potential.

What is Oxidation Potential?

The tendency of these processes to take place is not the same for an electrode. If the effect of releasing the positive ions into the solution is greater than accepting ions from the solution, then the electrode will gain a negative charge on it. Thus, the magnitude of this effect depends on its tendency to lose or gain electrons.

When the metal of an electrode loses its electrons, the electrons remain on the electrode while the positive ions of metal formed pass into the solution. This process is oxidation and can be represented as follows:

Thus, the electrode will get a negative charge and will be termed as anode. The potential for this process is called oxidation potential.

Whereas, the potential for reverse process, that is when metal ion in solution takes the electron from the metal, is called reduction potential. Electrode in this case is termed as cathode (have positive charge).

Need of Analyzing Oxidation Potential of a Metal.

For example: if we compare the metal sodium with zinc, Na has only one electron in its outermost shell and can easily release its electron. Thus, sodium will have a higher oxidation potential than Zn.

From this concept, the strength of oxidizing agent and reducing agent can be found out.

The electrochemical series showing standard reduction potential of certain elements is given below: 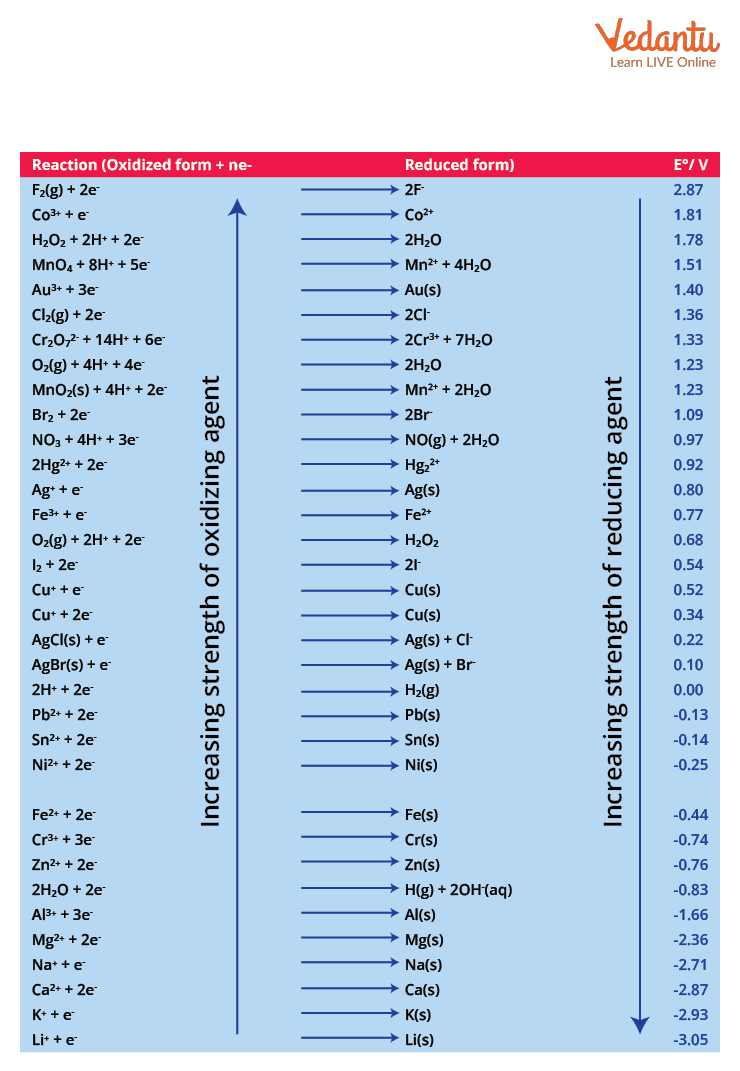 What is the Oxidation Number?

Oxidation number is a number given to an element in a compound, which denotes the net number of electrons lost or gained by that element in that particular compound.

For example: to calculate the oxidation number of Mn in KMnO4, we have to identify the net number of electrons lost or gained by Mn. In this compound, the general oxidation number for oxygen and potassium is already known (constant in almost every compound) i.e. -2 and +1 respectively. Since the whole compound is neutral, the sum of charges of all elements in this compound will be equal to zero. Thus:

Oxidation and reduction potential can also be called redox potential together for a process which involves both loss and gain of electrons and it is measured in volts or millivolts. Moreover, the term is very crucial while studying electrochemical cells, which involves movement of ions or electrons as a charge carrier.

FAQs on Oxidation Potential and Number for JEE

1. How does pH affect reduction potential?

If the reaction involves either H+ or OH- , its concentration can affect the reduction potential. Since the concentration variation of either of these ions can vary, the equilibrium to forward or backward depends on the reaction’s condition.

2. Which is the strongest reducing agent?

Thus, from the electrochemical series, it can be observed that Li has a standard reduction potential of -3.05 V (oxidation potential will be +3.05 V). Thus, it will be the strongest reducing agent.