Introduction to Stability of a Nucleus and Binding Energy

Nuclear chemistry is a branch of chemistry that deals with the study of nuclear particles, nuclear forces and nuclear reactions. This field emerged with the discovery of Radioactivity by Marie Curie. The release of a tremendous amount of energy through nuclear reactions become possible with the development of artificial radioactivity. The stability of a nucleus can be understood by its binding energy value. Let’s learn what nuclear stability is with the help of binding energy.

Where r is the radius of a nucleus of mass number A and R0 is a constant whose value is equal to $1.5\times$ 10–15m. The nuclear radius is very small being of the order of 10–14m. It is generally measured in fermi units, f (f = 10–13 cm = 10–15m). Evidently, protons and neutrons, collectively called nucleons, as mentioned above, are packed together in a very small space in the nucleus.

The nuclear density of the nuclei can be calculated from the mass and size of the nucleus using the following relation.

Substituting the known values, the nuclear density is calculated as 1.816$\times$1017 kg m–3 which is almost a constant value for all the nuclei irrespective of its size.

It has been observed that the isotopic masses of elements are always close to but not exactly equivalent to whole numbers. Aston expressed the variation of isotopic mass from mass number of the isotope in terms of quantity called Packing fraction which is defined as

Packing fraction sometimes may have a negative(--) or a positive sign (+) .The negative sign of the packing fraction means that the isotopic mass is less than the mass number of the isotope. In such cases, some mass gets transformed into energy in the formation of that nucleus, in accordance with Einstein’s equation E=mc2. Such nuclei, therefore, are more stable. A positive packing fraction on the other hand, would imply a tendency towards the instability of the nuclei. But this is not quite correct especially for elements of low atomic mass.

A plot of graphs of packing fraction against the corresponding mass numbers of various elements is shown in the  image 1. 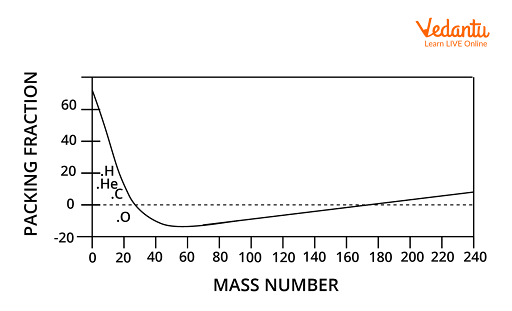 It has been observed that hydrogen, helium, carbon and oxygen atoms of mass number 1,4,12 and 16, respectively, do not fall on this curve. The packing fractions of Hydrogen (H), Helium (He) and Carbon (C), although positive, have small values. These elements are, therefore, stable.

A quantitative measure of stability of the nucleus, however, became possible with the development of the concept of mass defect.

It has been found that the actual isotopic mass of an element is almost invariably less than the sum of the masses of protons, neutrons and electrons present inside the atom.

The difference between the both is known as mass defect. It is one of the major factors affecting nuclear stability.

Suppose A is the mass number and Z is the atomic number of an element. Evidently, the atom of the element contains Z protons, (A–Z) neutrons and Z electrons. Let mp be the mass of a proton, mn that of neutron and me that of an electron. The atomic mass M’ of the isotope, should be given by

Where mH depicts the mass of the hydrogen atom.

The actual atomic mass of the element, however, is found to be less than M’(The Mass defect).  Suppose it is M. Then,

Binding energies per nucleon of a number of isotopes are plotted in the image; 2, against the corresponding mass numbers. It is seen that the maximum occurs at nearly about the mass number of 56 (iron).

Thus, the nucleus of iron is thermodynamically seen to be most stable. It is also seen that the points for helium (He) (mass number = 4), carbon (C) (mass number = 12) and oxygen (O) (mass number = 16) lie quite high in the graph. This shows that the nuclei of these elements are exceptionally stable than the other elements plotted in the graph and lie in the nuclear stability zone. The maximum binding energy per nucleon is seen to be about 8.7 MeV. This is the energy that is required to remove a proton or a neutron from a most stable nucleus.

The graph near the maximum is almost flat from A = 50 to about A = 100. This shows that the addition of a single nucleon to any nucleus in this region increases the binding energy by roughly the same amount. 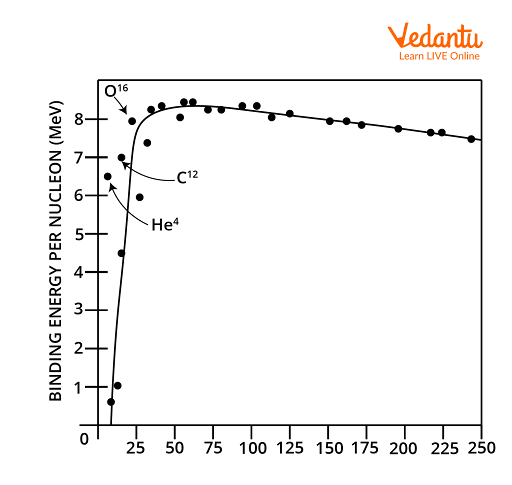 The binding energy per nucleon increases sharply with mass number A upto 20. It increases slowly after A=20. For A<20, there exists a recurrence of peaks corresponding to those nuclei, whose mass numbers are multiples of four and they contain not only equal but also even number of protons and neutrons.  Example 2He4, 4Be8, 6C12, 8O16 and 10Ne20. The curve becomes almost flat for mass numbers between 40 and 120. Beyond 120, it decreases slowly as A increases.

FAQs on Nuclear Stability and Binding Energy Curve for JEE

1. How can we relate the equivalence of a.m.u. and energy?

According to Einstein’s mass – energy relationship, E = mc2 where m is mass in kg, c is the velocity of light in ms-1 and E is the energy in Joules. Therefore, energy equivalent to one a.m.u. is given by

2. Give the relation between binding energy and nuclear fission.

For Higher mass numbers the curve drops slowly and the $\dfrac{BE}{A}$ is about 7.6 MeV for Uranium. Hence they are unstable and radioactive.

The lesser amount of binding energy for lighter and heavier nuclei explains the nuclear fusion and fission respectively. A large amount of energy will be liberated if lighter nuclei are fused to form heavier one (fusion) or if heavier nuclei split into lighter ones (fission).