Satellite is a term that is used to describe an object which is rotating around the earth or the sun in orbits regularly. The only force that acts on satellites is the gravitational force when they are rotating in their orbits. There are two types of satellites, which are mainly natural and artificial. Natural satellites are those which are formed in nature, like planets, the moon etc. In contrast, artificial satellites are those which are made by humans and launched from the Earth to other planets for the purposes of research, communication, and intelligence.

Newton realised and made a theory about satellites, stating that a satellite is a projectile and when it is launched with the required speed from the earth into space, then it has the capability of orbiting the earth. There are many rockets and artificial satellites that are launched by humans from the Earth into space. The first artificial satellite was named Sputnik. It was launched by the Soviet Union in 1957. Later on, many types of spacecraft were sent into space to rotate around the moon and many planets. Let us have a look at the motion of satellites and the orbital velocity of satellites in detail. 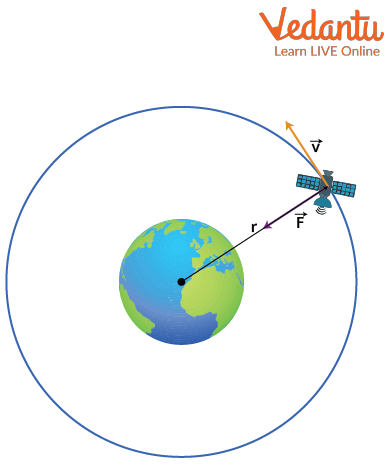 Motion of Satellite in an Orbit

The velocity of the satellite in the orbit is given by the formula,

Here, distance is the part travelled by the satellite that is the perimeter of the orbit, $2\pi r$ and the time is T.

The acceleration of a body in a circular motion is given by the formula,

Let us substitute the value of v in the above equation, we obtain

According to Newton's Laws of Motion, the force acting on the satellite is given by,

This is the equation of centrifugal force on the satellite which is travelling in a circular motion in an orbit around the earth.

Let us now derive the equation for the orbital velocity of satellites.

The orbital speed of satellites can be found using the equation of centripetal force acting on the satellite, i.e.,Fc.

Therefore the orbital velocity of the satellite is derived and here,

M is the mass of the Earth and r is the radius of the orbit in which the satellite is present. Let us now consider the insights of spacecraft.

Spacecraft can be described as a vehicle which is designed to enter the outer space of the earth for a wide variety of purposes like observation, communication, navigation and so forth. A spacecraft is a type of artificial satellite of the Earth, which should attain a minimum speed when it is launched from the Earth. These are designed to get you close to your target for some purpose. When a spacecraft gets close to its target, the gravitational force near the target affects the operation of the spacecraft, thereby making the spacecraft lose some of its energy. There is some extra force provided by the rockets when a spacecraft is near its target. This process repeats whenever a spacecraft enters space.

Rockets can be spacecraft, a missile or an artificial satellite that is sent into space with the help of a rocket engine. There is a propulsion system inside the rocket which helps the rocket overcome its weight and enter space. These work by the principle of Newton's Third Law of Motion and the conservation of momentum. On November 20, 1967, the RH-75, the first rocket developed in India was launched from the Thumba Equatorial Rocket Launching Station successfully. It was developed by the Indian Space Research Organisation (ISRO) and it was a truly Indian rocket. The speed of an artificial rocket was estimated at 8 kilometres per second, which is about 18,000 mph to be able to rotate around the earth in an orbit.  Sputnik 1 was the first space satellite launched by the Soviet Union in 1957. This is all about rockets and artificial satellites. Let us conclude what we have learnt in this article.

Rockets and artificial satellites are made by humans to conduct research on a certain planet in space. Newton made the theory that a satellite must attain a minimum speed to orbit around the earth. This is when a satellite acts as a projectile. In this article, we have learned how to calculate the orbital velocity of a satellite with the help of centripetal force and the gravitational force of attraction.

FAQs on Motion of Satellites of Earth - JEE Important Topic

1. Why are spacecraft used?

There are many types of spacecraft that are used as artificial satellites and are launched from the Earth into space. These include a wide variety of purposes for launching a spacecraft into space. They are used for communication, observation of things on the earth, navigation, exploring the planets around the earth, and observing how human transportation works in space. A spacecraft works on the principle of Newton's Third Law, which states that for every action, there will be an equal and opposite reaction.

2. What is the difference between centripetal force and gravitational force?