Motion in 2D and Its Dimensions for JEE

What is Motion in 2D?

Motion is the change of position of an object or a body. It could be a one-dimensional, two-dimensional, or three-dimensional motion. The motion of an object or particle in a plane is referred to as two-dimensional motion. Motion in two dimensions can further be divided into circular, projectile, and planar motion. Their examples include: a boy throwing a ball towards his friend is an example of projectile motion; rotating ceiling fan is an example of circular motion. Now, how do we simplify motion in two dimensions? We divide it into one dimension, correlating the equations and then calculating the unknowns.

The rate of change of position is known as motion. It can be different physical quantities like displacement, acceleration, velocity, speed, and so on. A car accelerating, an apple falling from a tree, water gushing out of a tap, etc. are all examples of motion. Every physical process around us is in some kind of fast or slow motion. Take, for example, distance. It is the change in position of an object with respect to time. Acceleration, on the other hand, is the change in velocity of an object with respect to time. Be it velocity, distance, acceleration, or displacement, all are used to describe motion.

What are the Types of Motion?

Depending on the type of motion an object goes through, motion can be classified into different types, which include:

The rotation of a car wheel, a pendulum swinging to and fro, a ball rolling from an inclined surface, a car accelerating at a constant speed or variable speeds are all examples of the different types of motion listed above. Let us further understand this with a few more examples.

Explanation of the Types of Motion with Examples

As the name suggests, a linear or rectilinear motion is the motion of an object in a straight line. We witness several examples of linear motion in our day-to-day lives. Some of these include the following:

A sliding door is a perfect example of linear motion. The to-and-fro motion of the sliding door allows a person to enter or close the door.

2. A person firing a bullet

A person firing a bullet is another good example of linear motion. When the bullet is fired, it leaves the barrel in a straight line. 3. The motion of a car on a flat road

The forward or backward motion of a car on a flat road is another great example to exhibit linear motion.

Rotational or circular motion is the motion of a rigid body moving with a constant angular velocity about an axis. The rotational motion does not change the shape or size of an object. Let us further understand this with a few examples.

1. Earth Rotating about its Axis

The rotation of the Earth around its axis is a perfect example of rotational motion. The Earth rotates at a very slow and constant speed about its axis.

2. Rotation of a Ceiling Fan

A ceiling fan mounted on the roof of your house rotates in a clockwise direction when it is switched on. The speed of the fan at a time remains the same until it is changed using a regulator.

3. Rotation of the Minute or Hour Hand of the Clock

The to-and-fro motion of a pendulum from its mean position is an example of oscillatory motion. The AC supply that we get in our households is another example of an oscillatory motion as current reverses its direction at regular intervals. 3. Vibrating string of a guitar or any musical instrument

The strings of the guitar vibrate when a person plucks them using a pick. It is another good example of an oscillatory motion.

What are the Dimensions of Acceleration?

Acceleration is the rate of change of velocity. To denote the dimensions of acceleration, they are denoted in terms of mass, length, and time. Let us derive this.

Now the dimensional formula for displacement, time, and velocity are:

Thus, the dimensions of acceleration are M0L1T-2.

Now that we have discussed types of motion with examples, we will look at some of the solved examples related to the same concept.

Visualisation of Vector in 2D

2D objects or two-dimensional objects are nothing but the objects that have a length and a breadth. For a vector to be denoted in 2D, its components are represented on the a-axis and y-axis, respectively.  Mathematically, these will be denoted as VX and VY. $\theta$ is the angle that the vector $\vec V$ with the x-axis. 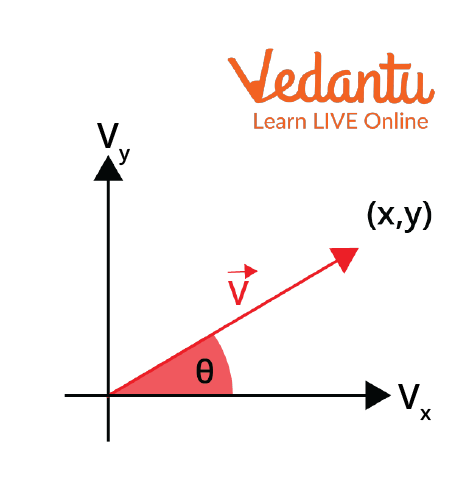 The motion of an object in a curved path with constant acceleration is known as projectile motion. The motion in this case is along the x-axis and the y-axis. Here, x and y are the horizontal and vertical components, respectively, and u is the initial velocity and g is the acceleration due to gravity. There are other important equations related to the projectile motion which include the time of flight (T), maximum height (H), and the horizontal range of the projectile (R). These equations are

Here, u is the initial velocity, g is the acceleration due to gravity, and θ at which the projectile was thrown with respect to the horizontal.

These are the equations of motion of the projectile.

Equation of Motions in Two Dimensions

The three equations of motion in two dimensions x and y are given as:

Similarly, the equations can be written in y directions.

Solution: The above problem can be solved by dividing velocity and acceleration into one dimension. Thus, along the x-axis, we have initial velocity as 2 $\dfrac{m}{s}$, acceleration as 4 $\dfrac{m}{s^2}$. Using the first equation of motion, we have v=u+at. Substituting the values above in this, we get

Now, we will calculate the same along the y-direction.

We get the value of velocity as

Similarly, the displacement will be

The final displacement is

Therefore, acceleration will be

FAQs on Motion in 2D and Its Dimensions for JEE

1. What is a frame of reference?

A frame of reference is an important concept in Physics. It is especially helpful when we are trying to calculate a value based on set values or criteria. It usually consists of a coordinate system or setting up coordinates in relation to the motion of an observer.

2. What is relative motion?