What is Lateral Displacement of Light?

Light rays are waves that travel through a given non-opaque medium at a fixed speed. On encountering a press of a different refractive index, these rays tend to travel at a different rate than the original medium. On exiting the second medium, these rays eject themselves from the medium parallelly to the original direction, but with a slight displacement from the original ray. Therefore, to define lateral displacement of light, this behaviour of movement of light through separated refractive indices is termed as lateral displacement.

This phenomenon of light is based on the property of the wavefront. When a wave passes from one medium to another (of varying density), obliquely, various points of the wavefront move at different speeds in the second medium.

Imagine a wave moving from one medium to another where it moves slower than in the first medium. When the wave strikes the glass slab at an angle from the normal, which is not 0, one side of the wavefront will contact the interface earlier than the other side. This discrepancy makes the wavefront bend in such a way that the entire wavefront enters the medium in unison. This phenomenon can be explained on the basis of the Huygens principle (which is outside the scope of this topic). This principle probes into the wave nature aspect of electromagnetic waves, i.e., light.

Snell’s Law: This law states that for a given pair of media, the angles of incidence and refraction are proportional to their phase velocities. In turn, these phase velocities correlate to the refractive indices of the respective media. 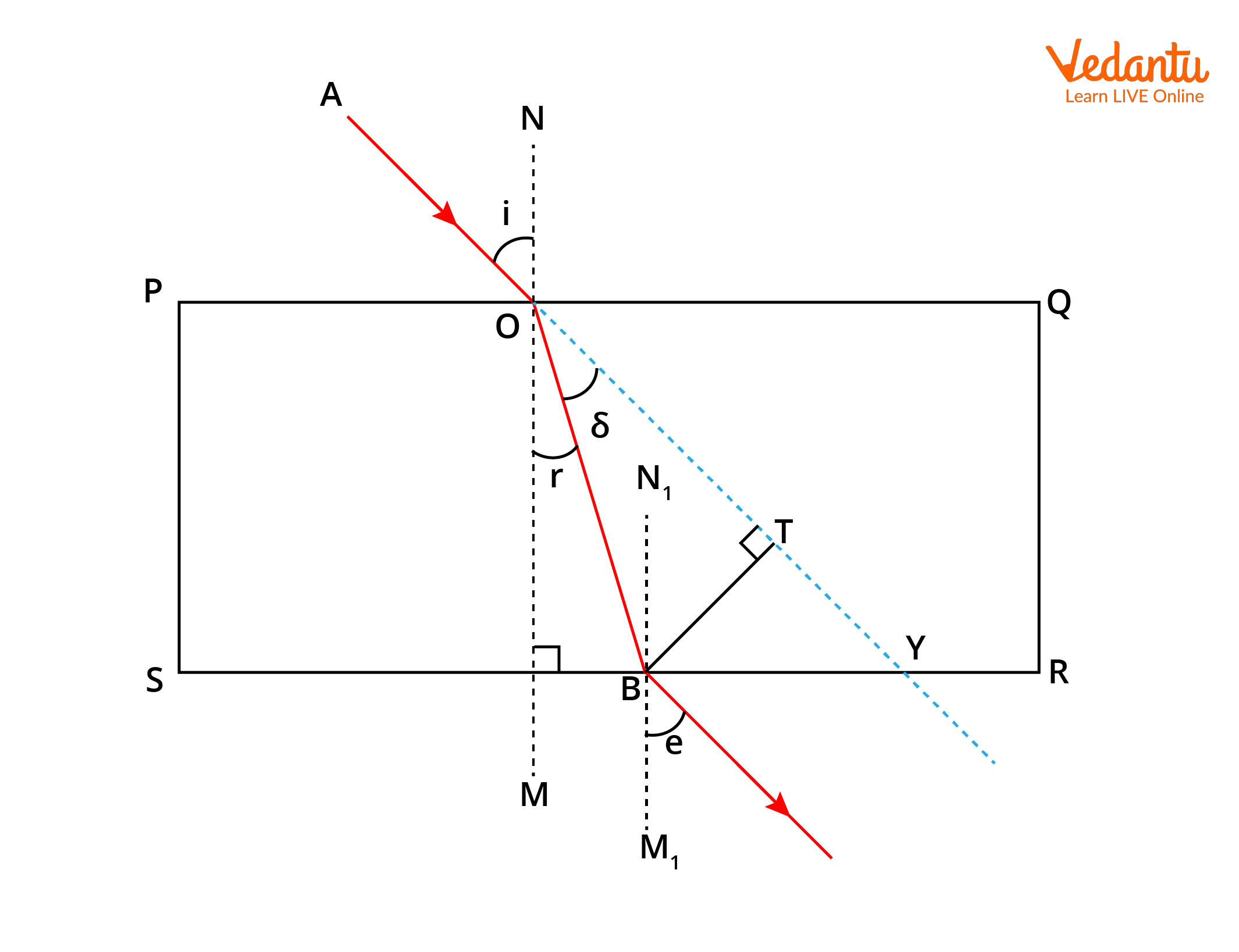 Lateral displacement of light in a glass slab

Let's put a perpendicular from B to the original light path at a point T to create a right-angled triangle. In that triangle,

Also, if we extend the normal NM to SR, we get,

which is the same as,

Here, as you can see, BT is the lateral displacement required.

Using the above equation in (1), we get the lateral displacement BT as

FAQs on Lateral Displacement of Light - Important Concepts for JEE

1. How many questions are asked from the lateral displacement of light in JEE?

Optics is one of the most important topics in both the JEE Main and JEE Advanced exams, accounting for a large portion of the questions. Preparing lateral displacement concepts can help you secure about 4-8 marks in the exam easily. You can expect multiple choice and numerical-based questions from this topic. Lateral displacement is an important concept in this topic. To get a better hold of this topic, you can solve previous years’ questions on the same.

2. What is the physical significance of lateral displacement?

It is a phenomenon during which a light ray changes its path while moving from a rarer/denser medium to a denser/rarer medium. If the second medium is rarer, the light ray moves away from the normal, and vice versa. Lateral shift is related to the intrinsic property of the material, and it is dependent on the incident ray. If the ray strikes at an angle greater than the critical angle, total internal reflection occurs. In this case, the surface acts as a reflecting mirror for the light ray.

3. What is the normal shift?