Half Life of Zero Order Reaction for JEE

What is Half Life of Zero Order Reaction?

Half-life is the concept of time, so the word is sometimes used as the half time of zero order reaction. But note that the correct usage is half-life period, not half time.

For a zero order reaction, the rate will be proportional to the zeroth power of concentration of reactants. If we consider a reaction

The rate of the reaction, if it is zero order, will be

dA is the difference between initial and final concentration at a given time interval of dt (tfinal – tinitial).

So the above equation becomes

Integrate the above equation so that we get

Different Types of Graph for a Zero Order Reaction

This equation exactly looks like the equation of a straight line (y= mx+c) where m is the slope and c is the intercept. If we compare this with the above equation, we will get the slope as –k and intercept as $[A]_0$ for a graph of $[A]_t$ in y axis and time t in x axis.

Therefore, the graph of concentration Vs time of zero order reaction will look like a straight line with negative slope. 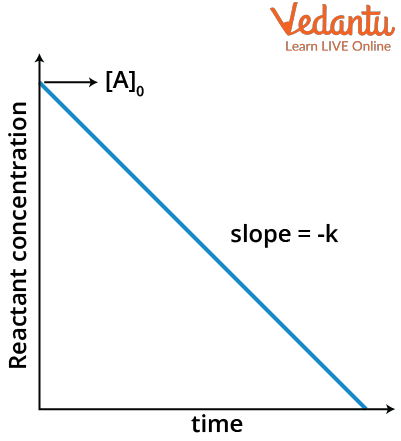 Rate of zero order reaction is;

That rate is independent of the concentration of reactant and thus will be a straight line with slope zero. 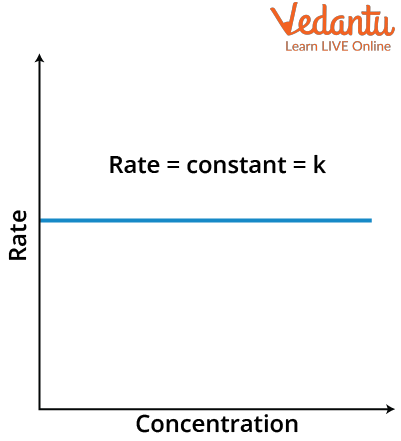 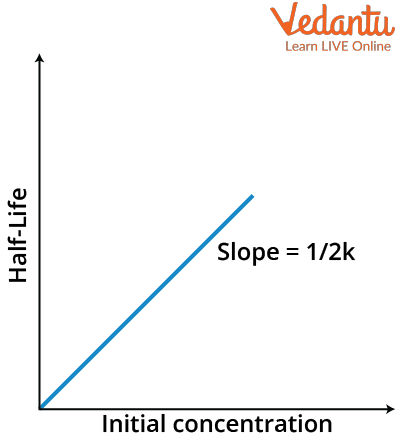 In a half-life, 50 % of the reactant will get consumed. Calculating half-life is very useful in many reactions especially in pharmaceutical fields. For example, half-life can be used to determine the dose of medicine to be taken by a patient.

FAQs on Half Life of Zero Order Reaction for JEE

1. What is the half-life of a first order reaction? Why is it important?

Not only in carbon dating, the concept of half-life is very important in all radioactive decay related problems and also in medicinal fields.

2. What is the unit of rate constant for a zero order reaction?

The unit of rate constant can be calculated by putting all the known units of other terms in a rate equation.

For a zero order reaction rate = k, the unit of rate constant will be equal to the rate of the reaction. We know that the rate of the reaction is the change in concentration of reactant or product in a given time interval. Thus, its unit is mol L-1 s-1. Therefore, the unit of rate constant for a zero order reaction will also be mol L-1 s-1.