Graph of a Quadratic Polynomial for JEE

What is a Quadratic Polynomial?

A polynomial is any expression in mathematics that has one or more algebraic terms along with numerical values. A polynomial function can comprise completely of variable terms as well. A few examples of polynomial functions will be the quadratic and cubic functions. Even a linear function in the form of y = mx+ x will be considered a linear polynomial whose graph is a straight line.

To draw the graph of a quadratic polynomial we must follow the steps given below:

When D > 0, the graph intersects the x-axis at two distinct points which are given by the roots of the functions

When D = 0, the parabolic graph touches the x-axis at one single point.

When D < 0, the graph does not touch the axis and lies far away.

For drawing on the graph, we must plot the x values and their corresponding y values. By plotting these points on the graph we can easily draw the graph of a quadratic polynomial. If the value of the coefficient of the squared x term i.e. a > 0 then the parabola opens upwards. If a <0 the parabola will open downwards

To understand this further, we take the following quadratic polynomial example:

To solve this example we will follow the exact steps mentioned above.

Since a > 0, the parabola will open upwards.

As we can see D > 0. Therefore the parabola will intersect the x-axis at two distinct points which will give us the roots of the quadratic polynomial.

The required polynomial chart to draw the graph will be given as follows:

Therefore the required graph that we obtain from plotting all the points is as follows: 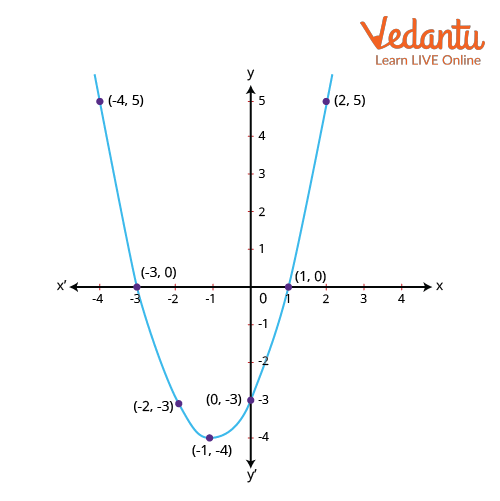 Relationship Between Zeros of a Quadratic Polynomial and its Roots

A quadratic polynomial is any mathematical expression constituting numerical coefficients and variables. The highest degree of power of the variable in this context is 2. The graph of a quadratic polynomial is a parabola. If the coefficient of the x2 term is positive then the parabola will open upwards. If the coefficient of the x2 term is less than 0, then the parabola opens upwards. The value of the discriminant gives us the position of the curve on the graph. When D= 0 the graph intersects the x-axis and at D > 0 and D < 0, the curve touches the axis at a single point and lies above the axis, respectively. The relations between the roots of a quadratic polynomial and its roots are given as follows: $\alpha + \beta = -\dfrac{b}{a}$ and $\alpha\beta = \dfrac{c}{a}$

FAQs on Graph of a Quadratic Polynomial for JEE

Just as we see in the case of quadratic equation, the relationship between the roots and zeros is given as follows:

The cubic polynomial has the form $a x^{3}+b x^{2}+c x+d$, with the zeros, and. We know the relationship between the polynomial's sum and the product of its zeroes and coefficients. The zeros of a polynomial are the points where the polynomial as a whole becomes zero.

2. What is the meaning of the term "quadratic equation"? How can you decide whether a graph is quadratic or not?

In mathematics, a quadratic problem is one in which a variable is multiplied by itself, which is known as squares. The size of a square is equal to its side length multiplied by itself in this language. The word "quadratic" comes from the Latin word quadratum, which means "square."The easiest way to see whether the graph is that of a quadratic function or not, we simply need to check the curve. A quadratic function always exhibits a parabolic curve.