The anions, or neutral molecules, operate as electron-pair donors in the creation of coordinate bonds whereas the metal atom or ion acts as the electron pair acceptor. Ligands are atoms, molecules, or anions that transfer a pair of electrons to a metal atom or ion to create a coordinate bond with it. The central metal atoms or ions are the metal atoms or ions to which these ligands are bound. Any atom or molecule connected to a central atom, usually a metallic element, in a coordination or complex compound, is referred to as the ligand in Chemistry.

Simple ions like CI, small molecules like H2O or NH3, big molecules like ethylene diamine, i.e., ethane-1, 2-diamine (NH2CH2CH2NH2), or even macromolecules like proteins can be used as ligands. Nitrogen and oxygen are the most prevalent donor atoms in ligands. The ligands are hence Lewis bases while the central metal atom or ion is Lewis acid. The neutral molecules water (H2O), ammonia (NH3), and carbon monoxide (CO), as well as the anions cyanide (CN-), chloride (Cl-), and hydroxide, are examples of frequent ligands (OH-).

Ligands come in a variety of shapes and sizes. Ligands can be classed based on a variety of factors. The most frequent way to classify ligands is by the binding sites they have with the core metal atom or ion. Ligands are classified as monodentate, bidentate, polydentate, or polydentate based on the number of sites.

Monodentate ligands are ligands that coordinate to a metal ion's single site. In other words, the metal ion can only accept one pair of electrons. Consider the following example: SO42-, Br-, Cl-etc.

The ligands that occupy two positions on a metal ion are known as bivalent ligands or bidentate ligands. It can be coupled to two metal ion locations, such as NH2CH2CH2NH2 and so on. 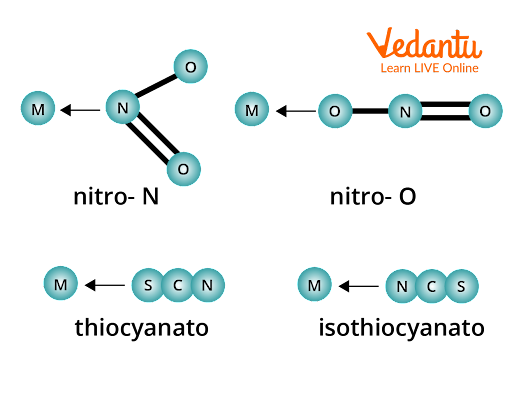 These are ligands that occupy several metal ion positions. For example, EDTA. This group comprises all dentate ligands with higher levels than bidentate, such as tridentate, tetradentate, pentadentate, hexadentate, and so on.

The denticity of a ligand is the number of atoms via which it can give a pair of electrons. On this basis, ligands can be unidentate, tridentate, or polydentate.

Chelation occurs when a central metal atom or ion is coordinated with a ligand by two or more groups of the same ligands in such a way that five or six-membered rings are formed with the metal atom or ion, and such ligands are known as chelating ligands. As a result, chelating ligands include all bidentate and polydentate ligands. Examples: ethane, 1-2 diamine NH2CH2CH2NH2.

Importance of Chelates in Chemistry

Chelating agents are used in a variety of fields, as detailed below:

Metal chelate compounds are commonly used in agricultural fertilisers to give micronutrients. Plants require micronutrients (Mn, Fe, Zn, Cu) to flourish. In the absence of chelating agents, most fertilisers contain phosphate salts, which transform metal ions into insoluble solids with no nutritional benefit for plants. The most common chelating agent is EDTA, which retains these metal ions in a soluble form. Some chelating chemicals can be sprayed directly on the soil for root uptake, while others can be administered as foliar sprays. Since no precipitates occur within the active pH ranges, several are also well suited for use in soilless culture.

Chelating compounds, such as peptides and sugars, are used to remove metal ions from minerals and rocks in chemical weathering. Chelation solvent extraction is an example of a metal ion pretreatment technique from an aqueous sample (e.g., sea water) in oil production: chelating compounds are utilised in stimulation treatment and surface facility cleaning in the oil field.

The conclusion that ligands are the primary building blocks of coordination molecules seems reasonable. A chemical ligand in coordination is a molecule or ion that binds to the central metal atom and forms a coordination complex. It serves as an electron-pair donor, whereas the central atom serves as an electron pair acceptor. In coordination Chemistry, the terms ligand and chelate are frequently employed. The primary distinction between ligands and chelates is that ligands use coordination bonds to give or share electrons with a central atom. Chelates, on the other hand, are compounds that have a core atom that is bound to surrounding ligands.

1. What is the weightage of the coordination compound in NEET EXAM?

The NEET 2022 (National Eligibility and Entrance Test) is the only exam that leads to admission to several UG medical degrees at India's top universities, including AIIMS, JIPMER, and others. Many students perceive Chemistry to be a difficult topic. However, once the fundamentals are grasped, Chemistry becomes a simple and high-scoring subject.

Students should keep in mind that the Chemistry subject of the NEET 2022 exam is worth 25% of the total score. The weightage of this chapter is approximately 6% in NEET, so students should concentrate their efforts on their Class XI and Class XII NCERT books when studying these chapters. Students can refer to other books once they have completed the study using their NCERT books and solved the examples and exercise questions.

2. What do you understand about coordination compounds in Chemistry?