Determiners can be a pain in the neck, don't you agree? The previous sentence had 2 determiners (articles), in case you missed it. You might be baffled, as it happens to the finest of us. In English, determiners act as modifiers of nouns and are truly influential when it comes to grammar. Once learnt, students will be able to form words and sentences that carry precise grammar, enhancing their skill sets as they progress to higher classes.

Starting off, what’re determiners? Determiners are words that shed light on nouns and similar words and what they are referring to. They are of three major types - articles, possessives and demonstratives. In determiners for Class 9, students will deal with articles alone. They will know what are articles and their types and how to form sentences with them, leading to the hassle-free understanding of this grammatical concept through numerous determiners exercise for Class 9.

Today we will study an exciting topic “Determiners”. We all know that nouns used in sentences always accompany some words either before or after the noun. Those words play a crucial role in understanding the meaning of the sentence. Those words are called Determiners. Through this article, you will learn about the determiners, and types of determiners along with examples and practice questions. 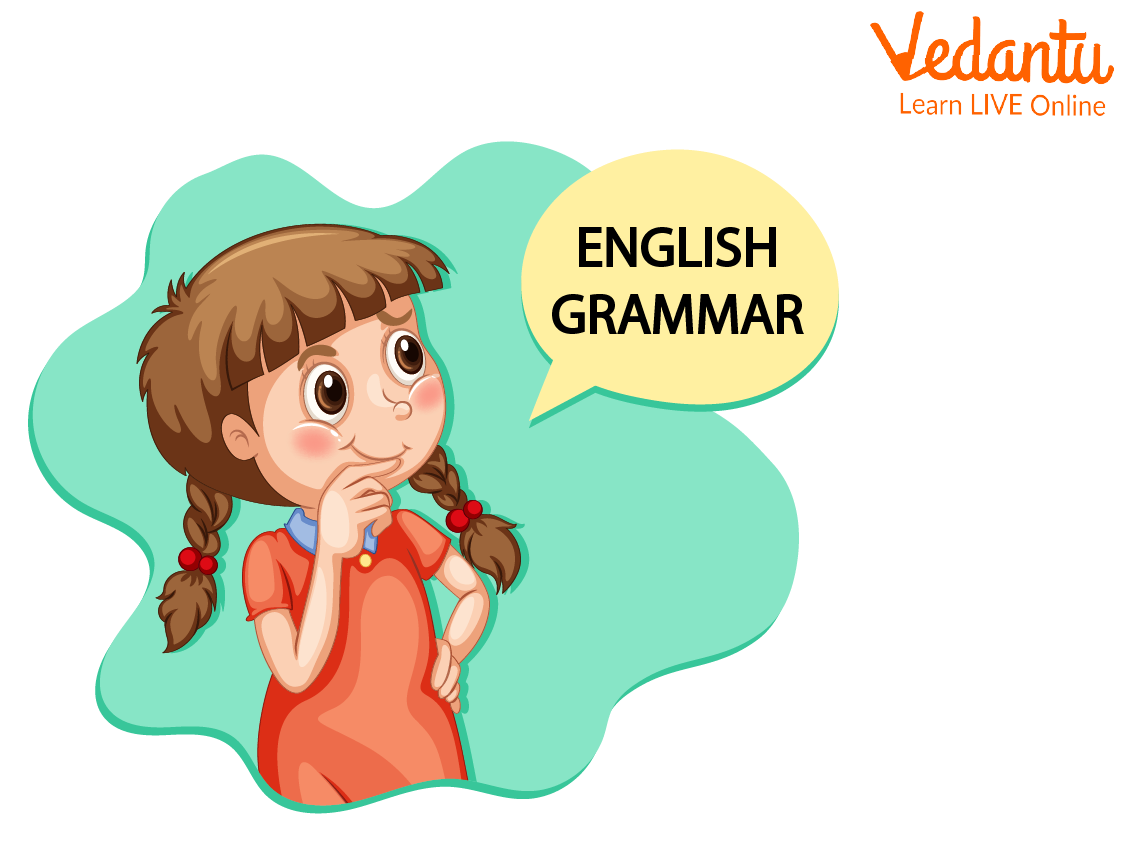 A determiner is employed to modify a noun. It indicates regard to something specific or something of a particular type.  There are nearly fifty sorts of determiners.

The determiners come at the beginning of the noun and if an adjective is present, then they come before the adjective. No two or more determiners are present before a noun at the same time. So, we can call them to be mutually exclusive.

Some examples of determiners are A, An, This, That, Those, each, these etc. 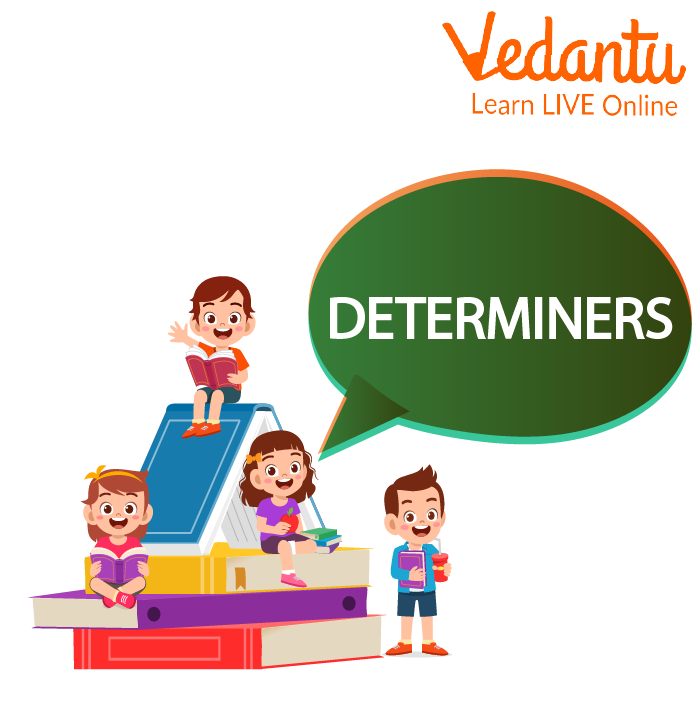 There are six types of determiners. 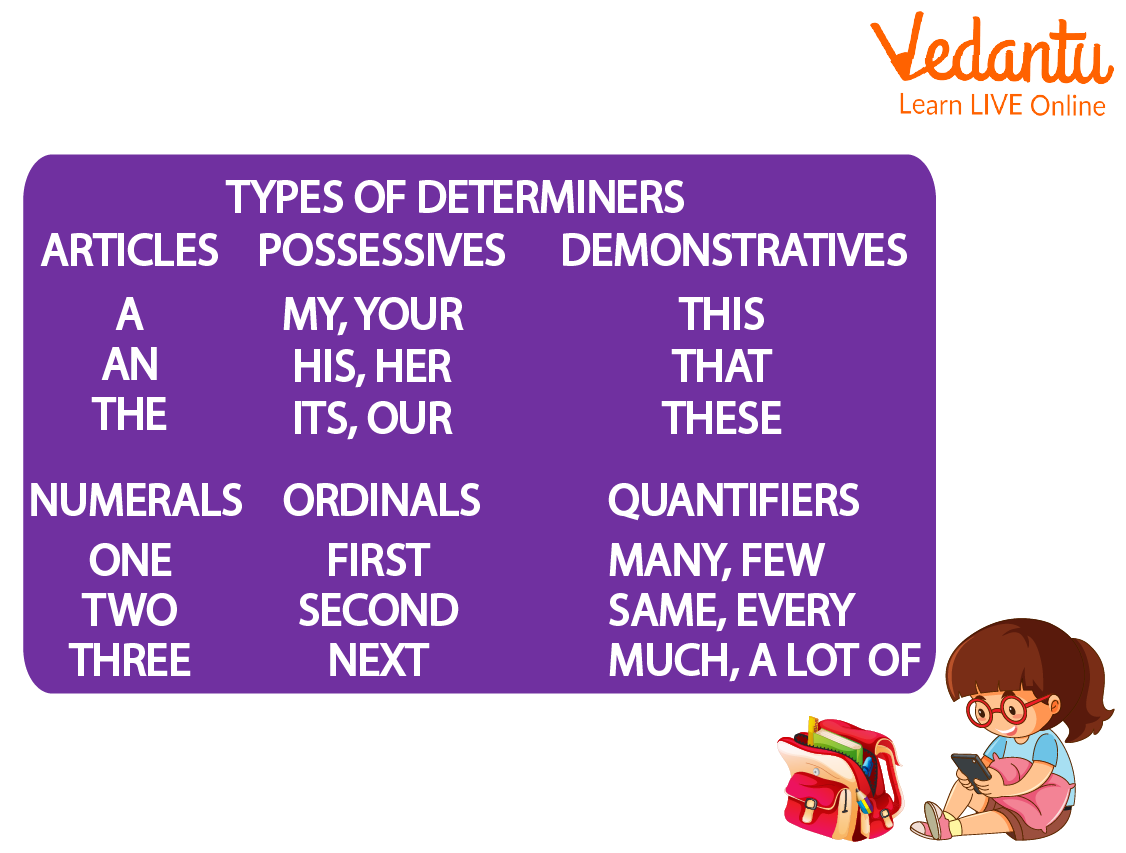 Articles are a type of determiners. 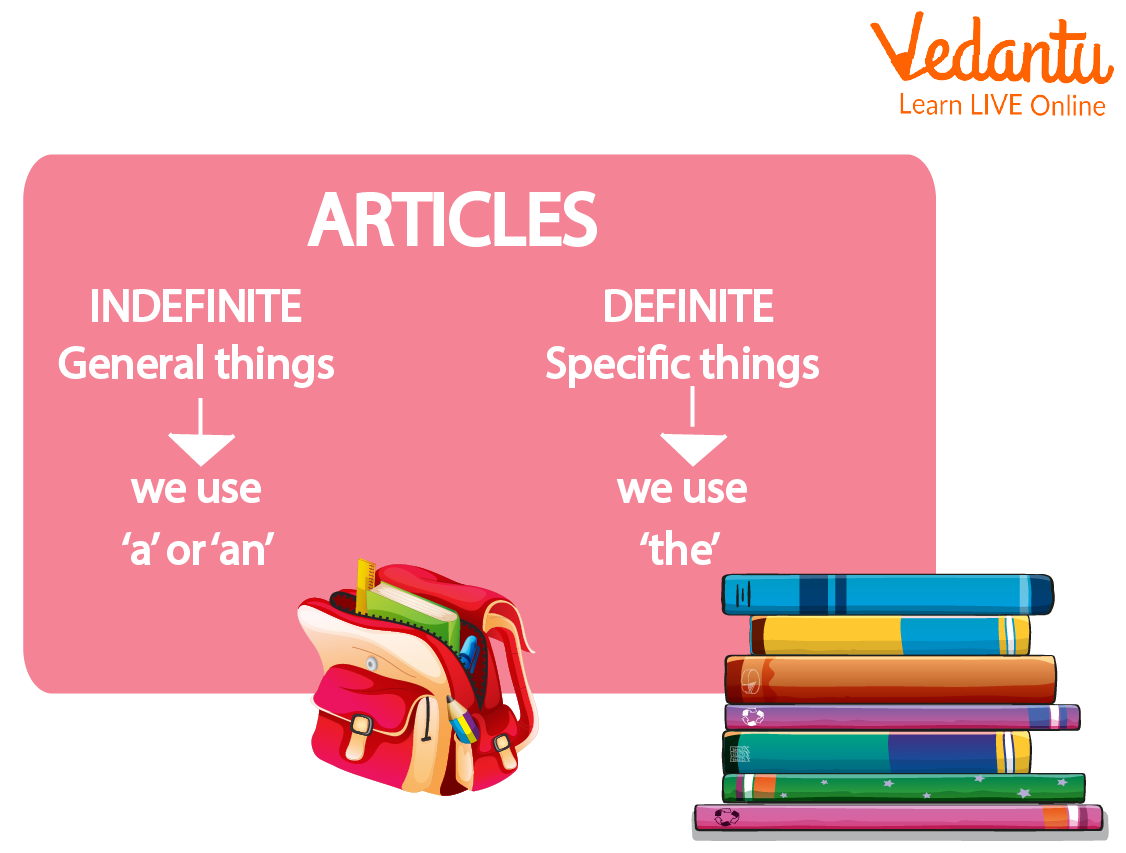 A and An are referred to as indefinite articles, whereas "the" is referred to as a definitive article. The distinction between A and An is made based on sound.

The dog is a devoted pet.

To indicate who owns or "possesses" something, we use possessive determiners.

Demonstrative Determiners identify a subject and establish their physical or intellectual separation from the speaker. Demonstratives include the words "this," "these," "there," "those," and "that." Review the following phrases:

The quantity or degree of anything is revealed by quantitative determiners. They demonstrate the depth of a gesture. These determiners were previously taught as quantity adjectives. They range from being a lot to a little to no, none, some, all, whole, enough, sufficient, half, etc.

These determiners are used to tell the order of the nouns. These are to work out the class or present the position of the subject in the sentence.

Fill in the gaps with appropriate determiners.

Examples of Usage of Determiners for Class 9

These are a few ncert determiner exercise Class 9 examples :

She lent me one of __ books from her brother’s library.

He claims to have seen __ elf in his backyard.

“Death Note” is __ anime about __ young man who comes across __deadly notebook which belongs to soul reapers. He is introduced to one such soul reaper who prefers __ apple over everything else. __ story progresses intensely and ends with __ characters getting what they deserve. It sheds light on __ thin lines between justice, power and opinions.

Interesting Facts about Determiners for Class 9

In this chapter, we have discussed one of the very crucial topics of English Grammar,  Determiners. Determiners are useful because they help to define nouns and make sentences as clear and focused as possible. Many components of speech can function as determiners, including articles, demonstratives, quantifiers, and possessives. They may be able to determine whether an item (noun) is broad or specialised, singular or plural. They can quantify nouns and provide information about noun ownership. They can refer to the proximity or distance of nouns. In a nutshell, Determiners indicate which reference the noun has been used in.

Being convenient to use, students can now learn elaborated content on determiners for Class 9 at Vedantu’s website, available for free downloads through the PDF format.

There are also few ncert determiner exercise Class 9 present at Vedantu’s website, which prove to help the students of Class 9 in the long run, drastically boosting their overall mastery over English grammar.

1. Why are the articles named definite and indefinite?

2. What is the difference between determiners and articles?

3. Can we use two determiners/articles in a sentence?

Of course, having any two or more determiners/articles in a sentence is very much possible.