The Golden Touch Story in English

Famous Story of King Midas and The Golden Touch

Do you enjoy reading bedtime stories? If yes, then you are going to love the story which we are going to learn today. Reading stories can be a fun activity to do every day. It teaches us many important life lessons and can create a beautiful memory for you while you grow up. That is why we have provided the golden touch story in English with morals. It is the story of King Midas and how his life changed after his wish of turning everything into gold, came true. So, let’s find out what life lesson does king Midas and the golden touch short story teach us! Long back in ancient Greece, there lived a king named Midas. He was known to have a lot of wealth in his kingdom but in spite of having so much treasure, the king was never satisfied and happy. He was always greedy and wished for more wealth and treasure.

One day when the King was in his treasure room and was counting all the gold coins, he was visited by a Greek God named Dionysus. He offered a wish to King Midas for some of his good deeds. The King became so greedy for gold that without wasting any time he quickly made a wish to turn everything that he would touch into gold. His wish was granted by the Greek God which made the King extremely happy and delighted.

He quickly went to his garden and touched an apple tree which turned into gold instantly. He became so excited with joy that he went on touching all the things around him to turn them into gold. His happiness knew no bounds. After a while, the king was hungry and thought of going inside the palace to have his meal. But sadly, he was unable to eat anything as whatever he touched turned into gold instantly. At last, had to starve in hunger and soon he became frustrated with his situation.

King Midas also had a sweet and lovely daughter named Marigold, whom he loved very much. Upon seeing her father in trouble, the daughter ran toward him to comfort her father. But as soon as she threw her arms around her father, the daughter turned into gold.

King Midas was shocked in pain and unbearable grief. He sat there crying in regret upon seeing his daughter turn into gold. He soon realised that his greed was the biggest mistake and he, himself is responsible for all this. King Midas cried and begged the Greek God to take his wish back and bring back his daughter. 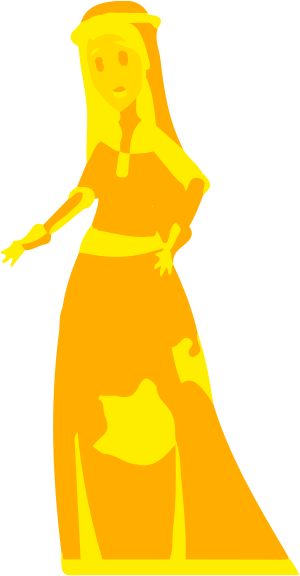 Soon after, the Greek God appeared in front of him. Feeling sorry for King Midas’ situation, he took the golden touch wish back from him. The Greek God also instructed him to take a dip in the palace’s pond and pour that water over all the things he wished to restore to their previous state. He obeyed and did everything that was instructed by the Greek God.

Soon he sprinkled the pond water on Marigold,  and she quickly returned to her normal state. The King was overjoyed to get his beloved daughter back and thanked the Greek God. He took a pledge to not become greedy towards anything ever again.

The famous story of King Midas and the Golden Touch is known as a classic bedtime story and also teaches us a very important lesson. We hope reading the Golden Touch Story in English was fun and interesting to you all.  Let us now quickly learn the moral of this beautiful story.

Moral of the Golden Touch Story

So what do we have to learn from King Midas and the Golden Touch story summary?

The Golden Touch summary teaches us that we should not be greedy for anything. Excessive greediness will always land us into trouble and will never give us any fruitful results. Instead, we should always be thankful for what we have.

We hope this was an interesting story and you enjoyed reading it.

We request all the parents to develop a habit in their kids to read bedtime stories. This habit will help them not only to explore different stories but also improve their level of concentration. You can also make beautiful memories with your child through the process of reading out the best bedtime stories to them.

FAQs on The Golden Touch Story in English

1. Why did the Greek God grant a wish to King Midas?

King Midas who was the king of Ancient Greece was granted a wish in which anything that the king touches will turn immediately into gold. This wish was granted to him by the Greek God, Dionysus for some of his good deeds towards the wise satyr Silenus.

2. What happens to King Midas’ daughter?

King Midas’ daughter, Marigold was also turned into gold when she came running towards him to comfort her father. This made the king realise that his greed was responsible for his own fate.