Having difficulties in keeping up with your studies? How many times do students go through the pain of finding an easy and appropriate study material that can help them understand the subjects easily? Many students still do not find the right books or online solutions that can make learning easy for them. Well, NCERT Solutions are here to loosen up your academic problems. You no longer need to spend tireless hours digging for good study material. NCERT Solutions for Class 6 English Honeysuckle Chapter 3 provided by Vedantu on this page are formulated by experienced professional teachers keeping in mind the study needs of all students. Subjects like Science, Maths, English will become easy to study if you have access to NCERT Class 6 Science, Maths solutions and solutions of other subjects. You can also download NCERT Class 6 Maths to help you to revise complete syllabus and score more marks in your examinations. 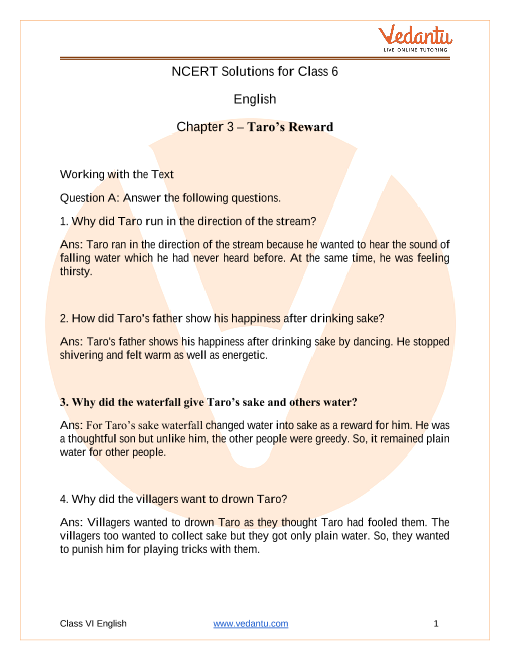 Working with the Text

Question A: Answer the Following Questions.

1. Why Did Taro Run in the Direction of the Stream?

Ans: Taro ran in the direction of the stream because he wanted to hear the sound of falling water which he had never heard before. At the same time, he was feeling thirsty.

2. How Did Taro’s Father Show His Happiness After Drinking Sake?

Ans: Taro's father shows his happiness after drinking sake by dancing. He stopped shivering and felt warm as well as energetic.

3. Why Did the Waterfall Give Taro’s Sake and Others Water?

Ans: For Taro’s sake waterfall changed water into sake as a reward for him. He was a thoughtful son but unlike him, the other people were greedy. So, it remained plain water for other people.

4. Why Did the Villagers Want To Drown Taro?

Ans: Villagers wanted to drown Taro as they thought Taro had fooled them. The villagers too wanted to collect sake but they got only plain water. So, they wanted to punish him for playing tricks with them.

5. Why Did the Emperor Reward Taro?

Ans: The emperor rewarded Taro to establish him as a role model. Taro was kind and obeyed his parents. He was fully devoted to them. The emperor wanted to encourage all children to follow in his steps and respect, obey and serve their parents.

Question B: Mark the Right item.

(i) he didn't work hard enough.

(iii) the price of wood was very low.

Ans: (iii) the price of wood was very low

(i) to live a more comfortable life.

(ii) to buy his old father some sake.

(iii) to repair the cracks in the hut

Ans: (ii) to buy his old father some sake

3. The Neighbor Left Taro’s Hut in a Hurry Because

(i) she was delighted with the drink.

(ii) she was astonished to hear Taro's story.

(iii) she wanted to tell the whole village about the waterfall.

Ans: (iii) she wanted to tell the whole village about the waterfall.

Question A: A Strike off the words in the box below that are not suitable.

Taro wanted to give his old parents everything they needed. This shows that he was ...

Ans: Taro wanted to give his old parents everything they needed. This shows that he was honest, trustworthy, and efficient.

1. “This Made Taro Sadder Than Ever.” ‘This’ Refers To

(i) a strong wind that began to blow.

(iii) Taro's inability to buy expensive sake for his father.

2. “This, Said the Emperor, Was To Encourage All Children To Honor and Obey Their Parents.” ‘This’ Refers To

(i) the most beautiful fountain in the city.

(ii) rewarding Taro with gold and giving the fountain his name.

(iii) sending for Taro to hear his story.

Ans: (ii) rewarding Taro with gold and giving the fountain his name.

Question C: Arrange the words below in pairs that rhyme.

1. Fill in the Blanks With Words From the Box.

2. Find These Sentences in the Story and Fill in the Blanks.

Question A: Speak the Following Sentences Clearly but As Quickly as You Can. Learn Them by Heart.

Ans:  Do yourself and try to speak the sentences clearly.

Ans: Do yourself and try to speak the sentences clearly.

1. The Story ‘Taro’s Reward’ Shows That Taro Is Thoughtful, Hardworking and Also Wise. Read Aloud the Parts of the Story That Show These Qualities in Taro.

Ans: The part of the story which highlights this is "All day long he chopped wood in the forest. Though he worked very hard, he earned very little money. This made him sad, for he was a thoughtful son and wanted to give his old parents everything they needed."

(I) Like Patrick in the Story ‘Who Did Patrick’s Homework’, Taro Is Helped by Magic. Do You Believe in Magic? What Are the Magical Things That Happen in These Stories?

Ans: No, I don't believe in magic. It’s just a result of continuous practice and some tricks. In this story, the magic is visible in the way the waterfall appears behind the rocks and tastes like sake for Taro and plain water for other people.

(II) Which Story Do You Like Better, and Why? Do You Know Such Stories in Other Languages? Discuss These Questions in Class.

Ans: Both the stories are based on the value of hard work. It tells us that hard work is the key to success. But I like Patrick's most as it is more adventurous than the other one.

3. Now Write a Paragraph or Two About These Two Stories, Comparing Them.

Ans: The story- Who did Patrick's homework is more adventurous than the other one- Taro's Reward. Patrick is presented as a hardworking boy who hates homework. He is good at sports. The story is a natural presentation and ends with a message that hard work is the key to success. On the other hand, Taro is shown as a thoughtful, wise, and hardworking boy who is kind and fully devoted to his parents. His characterization is just opposite to Patrick’s. He was also rewarded by the emperor for his devotion to his parents.

1. Listen to These Children. What are They Talking About?

2. Work in Groups. Come to Some Agreement on Each of the Activities Given Below. Decide Which is the Most Interesting, Dullest, Most Dangerous, Safest, Most Rewarding, Most Exciting.

Ans: Most interesting: dancing, listening to music and watching TV.

Most exciting: Playing football and swimming.

Question 1: Your Teacher Will Speak the Words Given Below. Write Against Each Two New Words That Rhyme With It.

Honeysuckle is a CBSE prescribed collection of poems for Class 6. English Chapter 3 Class 6 Honeysuckle is The Wonderful Words by Mary O Neill who is a politician and also a former member of the Legislative Assembly of Alberta. In this poem, Mary O Neill reflects on the importance of language to a human being. All that we think, see, image is formulated into beautiful words when it comes out from our mouths. He talks about the diversity of English as a language, because it is commonly spoken and how wonderfully it conveys a person's thoughts or ideas. Nevertheless, the poet advises the readers to at least know one language and master it so that we can beautifully convey our thoughts without losing them due to lack of words. You can dive into the depths of this poem and what the poet wants from its readers by downloading NCERT Solutions Class 6 English Honeysuckle Chapter 3 pdf file free of cost.

How is Vedantu Helping Students to Scale Their Percentile Graph?

Vedantu is a learning app that enables the students to access advanced study material for their respective classes which is drafted by experienced and professional teachers. The main aim is to benefit all the students academically and help them understand, learn and achieve high scores in their exams. The pdfs are loaded with quality study content, questions and solutions to aid your studies and make it much easier. You no longer need to spend your time over the internet looking through sites that might decode all the topics and chapters in your course. Simply catch up with Vedantu and get yourself going with the study material.

1. What is the Message that Mary O Neill Conveys Through his Poem The Wonderful Words?

In the poem, Mary O Neill reflects on the importance of words in our life, that they are a wonderful medium of communication and one must have at least one language, possibly your mother tongue to beautifully bring out your thoughts. He doesn't want language to be a barrier while voicing your thoughts. He says that we must not let a valuable thought or some creative idea die just because we cannot use the accurate words to express them.

2. Should I Invest in Buying Study Guides for English?

Buying guides is an option for students who are finding it difficult to study and understand the concepts and topics. But if you keep on buying guides for all subjects, it will become expensive. Instead, you can get all necessary study material from Vedantu for free and you can study at whatever time you want. The study material offered by Vedantu includes all the material that a student might require for a proper understanding of a chapter, and besides it provides you with NCERT solutions for all the subjects to test your knowledge. So just visit Vedantu and get your study material for almost all subjects of all classes.

3. How can I Make the Most Out of Vedantu for Studying English?

Vedantu formulates its study material based on the syllabus prescribed by the CBSE board and hence contains all the updated formats of letters, essays,etc in English Language. For literature, expert teachers have analysed the pattern of potential questions that may come up for the exams and even if they don't come, it helps you cover all the topics vividly so that you can easily answer any question that is asked. Just carefully study, understand and learn all the content provided by Vedantu and finish your study material before your exams so that you have time to revise.

4. What did the king reward Taro with?

The king learned about Taro's concern for his parents. He gave Taro twenty pieces of gold as a prize. Then he called the city's most beautiful fountain Taro. This was done to urge other youngsters to look after their parents. Taro’s care for his parents was unselfish. This was why he got the reward from the king who was pleased and impressed with Taro and his love for his parents.

5. Why did the villagers want to harm and punish Taro?

Taro saké and others were given water by the waterfall because he was a considerate son who always honoured and followed his parents. He worked extremely hard to provide them with all that they required, whereas the others were selfish. The villagers wanted to drown Taro because they believed that he duped them by telling them that the stream contains saké. They were furious at Taro for this.

Taro did not have enough money to buy the costly saké. His economic condition was not very good. As a result, he began to work harder at cutting wood. God assisted him in removing saké from a waterfall. His father drank it, felt warm, and began to dance. His father was very happy with him, which in turn made Taro very happy as well.

7. Why did Taro repeatedly taste the water?

Taro noticed a lovely small waterfall hiding behind a rock. Kneeling beside a calm stream of water, he cupped a small amount in his palms and placed it to his lips. He tried it again and again, and each time it was the wonderful saké rather than the chilly water. Taro went to visit the waterfall and repeatedly tasted the water for this very reason.

8. Why did Taro go to the waterfall?

A pact with the Sun