Vedantu provides NCERT Solutions for Class 11 English snapshots Chapter 3 Ranga's Marriage to students for free in PDF format. All the exercises of the textbook are solved clearly with fully accurate answers. In order to score well in exams, having a firm grip on the knowledge of the textbook is very essential. NCERT solutions of Class 11 English Ranga's Marriage help significantly in this process and help the students get an idea about how to write such questions in the exam and the type of questions they are expected to face.

Studying from the NCERT solutions Class 11 English Ranga's Marriage can boost the confidence of the students and serve as a guide for the exam.  The solutions of Class 11 Ranga's Marriage are made by experienced and skilled professionals to help the students score better. The NCERT Solutions for Class 11 English snapshot Chapter 3 are simple yet eloquently constructed for understanding and clean presentation. 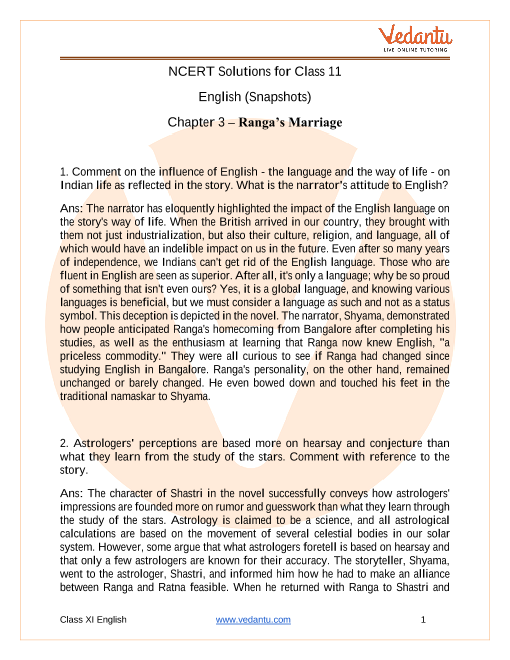 Ch 3 Class 11 English snapshot can be pivotal in laying a strong foundation for the students. It is a Chapter where one can score well if he is acquainted with the questions and the style of writing. The NCERT Solutions for Class 11 English Ranga's Marriage help the students to ponder upon the story and fully understand it. Class 11 snapshot Chapter 3 question answer solutions are explained in a step-by-step manner according to the guidelines of the CBSE board. The story “Ranga's Marriage” is simple yet beautiful and with the help of the NCERT solutions for Class 11 English snapshot Chapter 3, students are expected to score well in the exam.

Summary of the Story

The NCERT Solutions for Class 11 English snapshots Chapter 3 is based on the story Ranga's Marriage which revolves around the marriage of Ranga, a resident of Hosahali, a village located in the earlier Mysore and now a part of Karnataka. The village did not have many residents who knew English and Ranga, the son of the village accountant was the first to go outside the village to Bangalore to pursue his studies. After completing his studies, he returned to his village and was given a hero’s welcome.

Ranga enjoyed the attention and greeted everyone with a smile. But the residents were surprised to find him exactly similar to when he left the village and gradually left. The narrator had the opportunity to strike a conversation with him and exchanged mutual respects.

Later in the afternoon, Ranga visited the narrator with a few oranges and the narrator found him to be a wise and generous man. So he wanted him to marry and settle down with his family. But Ranga was not a believer of the arranged marriages prevalent in the society then and only wished to marry a girl whom he liked.

The narrator thought about Ratna, the niece of Rama Rao would be ideal for Ranga as she had her roots in the town and also had a sweet voice besides being able to play the harmonium and the veena. The next day, he sent out for both Ranga and Ratna to come to his house. When Ratna arrived, he asked her to sing a song and then Ranga also arrived.

Ranga peeped in to see the girl but could not see her as her head was low. Ratna felt shy by his presence and went inside. Ranga expressed his interests towards the girl to the narrator but he said that she was married a year ago. A disappointed Ranga went back.

The following day the narrator went to an astrologer and tutored him to tell Ratna was a perfect match for Ranga. He did the same and they went to the house of Rama Rao. The narrator went inside and told Ranga that Ratna was not married and asked if he wanted to marry her, Ranga agreed and they got married.

A few years later, Ranga and Ratna visited the narrator and they had a child, who they named after the narrator. They were leading a happy married life, thanks to the narrator.

1. Do the perceptions of astrologers depend on the stars or are based on hearsay?

In the story of ch 3 snapshot Class 11, the author takes a dig at astrologers and has put forward their other side. The narrator teaches an astrologer what he needs to say to Ranga so that he agrees to marry Ratna. When the narrator took Ranga to the astrologer, he studied his stars saying astrology is an ancient science and made some calculations so that Ranga does not turn suspicious. Then he abided by what the narrator had taught him and promised his relationship with Ratna would be successful. Later he explained to the narrator that he would have understood it from Ranga’s stars as well. This shows that they suggest based on hearsay more than their actual calculations.

2. Has the Indian society experienced any changes in marriages as described in the story?

Traditionally, marriages in India have been arranged by parents or relatives. In this story, the narrator arranges a marriage for Ranga with an astrologer’s help as was prevalent then. However, the Indian society has come a long way forward since then. The consent of the children has become important and the legal age of marriage has also been increased. Through movements like women empowerment, girls are no longer seen as a means of dowry but as partners to the boy as they are now qualified and educated enough. Even girls can choose their partners based on their qualities and choices. Thus although the elders have the final say the children are not forced to marry without their consent anymore.