What is a Collision?

A collision is a one-time event in which a strong force acts between two or more bodies for a brief period of time, causing the interacting particle's energy and momentum to change. Although the most common meaning of the word collision is an incident in which two or more objects clash violently, the scientific meaning of the phrase has nothing to do with the degree of the force. All collisions have something in common i.e. they all conserve the momentum. There are different types of collisions, and we’ll have a look at them.

In a collision, the physical contact between the bodies that collide is not really necessary. For example, when two billiard balls or a ball and bat collide, there is physical contact, yet when an alpha particle collides with a nucleus (i.e. Rutherford scattering experiment), there is no physical contact. When a boxer throws a punch at their opponent, we can say that their fist collides with the opponent. Similarly, when any astronomical object merges with a black hole in space, we can say that they collide. There are many such examples of collisions.

Before moving on to the types of collisions, we will discuss the coefficient of restitution.

The collision is considered to be perfectly inelastic if two bodies collide and stick together or travel at the same velocity after the contact. Since the final relative velocity of the particles is zero, the coefficient of restitution in a perfectly inelastic collision is zero. Although practically not all the kinetic energy is lost, it just means that the loss of kinetic energy is as large as it can be.

It can also be defined as the impact that occurs when the velocity vectors of both or any of the bodies are not parallel to the line of impact. The direction will be termed oblique direction. In an oblique elastic collision apart from the conditions mentioned above, the kinetic energy of the system will also be conserved. 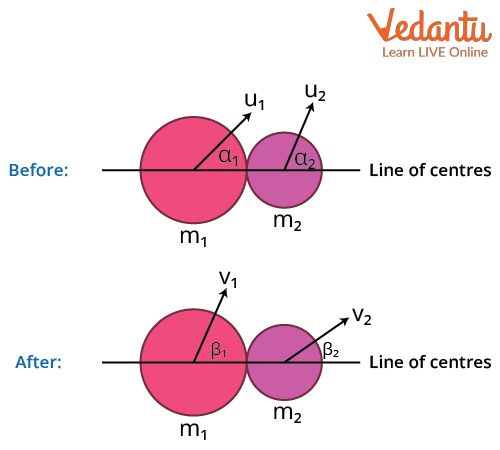 We can write the law of conservation of momentum for the above system as:

The relative speed after the collisions in the horizontal direction can be written as:

Similarly, the relative speed before the collisions between the balls can be written as:

The coefficient of restitution can then be written as:

FAQs on Oblique Collisions - Types and Formula for JEE

1. Is oblique collision important for JEE?

Working knowledge of the topic is important for any student as it will help them solve other collision problems. Collisions are an important part of the chapter on Work, Energy, and Power. Collisions always follow the law of conservation of momentum and are an integral part of other topics apart from just mechanics. They are extensively used in modern physics. Oblique collisions help improve the conceptual framework and are thus important. Work, Power and Energy has a weightage of 3.3% in JEE.

2. What are the three collisions that occur in a car crash?