There are many distinct kinds of fish that exist in the world, each with its own anatomy. Fish come in a variety of shapes, colors, and sizes, yet they all share some characteristics.

The morphology of fish is another term for fish anatomy. Studying different sections of fish will help you learn the names of different fish body parts in English. It will also boost your curiosity about aquatic bodies and aquatic delights. We will learn about the interior and external body parts of the fish in this section.

Let's start with a closer look at a fish's body! 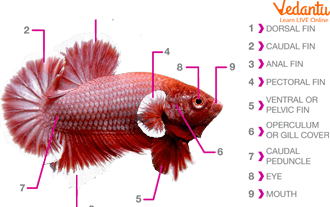 General Body of a Fish

Mainly there a four general body areas of a fish these are:

Dorsal refers to the back. The belly is found in the Ventral region. The fish's head is known as the anterior area, and the tail is located at the posterior end. A fish's body is divided into three main sections: the head, the trunk, and the tail. The brain, the eyes, the nostrils, and the mouth are all housed in the head. The trunk is the fish's primary body, and it contains the skeleton, spinal cord, and all of the internal organs.

Fish are vertebrates, which means they have a backbone like humans. Fish are aquatic animals, which means they live in water. Fish are cold-blooded animals because they cannot regulate their body temperature based on their surroundings. A fish's body is divided into three main sections: the head, the trunk, and the tail.

1. How do fish get their oxygen?

Fish use their gills to breathe effectively underwater, which is what sets them apart from other animals. When a fish opens its mouth, water pours over its gills, which have a fine structure that is densely packed with blood vessels (capillaries). These capillaries absorb dissolved oxygen in the water and transport it throughout the body. One of the reasons why dead zones (areas where excessive nutrients deplete the surrounding oxygen) are so harmful to ocean ecosystems is because organisms like fish cannot receive enough oxygen from the water to survive.

2. What do you understand by a sustainable fishery?

A sustainable fishery is one that can maintain catch over time while maintaining a healthy fish population. Fish stock is deemed sustainable in the United States when it is fished below its Annual Catch Limit (ACL) each year and the population size remains above a healthy threshold. However, sustainable fisheries imply more than just large fish populations; they also imply food security, opportunity, recreation, and culture for coastal and indigenous communities worldwide.

3. What do fish consume?

With so many distinct types of fish, food patterns can vary greatly—from plant stuff to smaller creatures like worms and crustaceans, to even other fish. Many fish predators are opportunists, and some fish have even been observed eating birds on occasion. Through their grazing, some herbivorous fish, such as parrotfish, help keep coral reefs from being overgrown with algae. Others, such as damselfish, will act like farmers, nurturing the growth of algae that they enjoy consuming.