What is Sovereign Wealth Funds?

What do You Mean by Sovereign Wealth Funds?

The States harness the power by making and enforcing laws, collecting taxes, participating in wars, and engaging in trade. As a result, a Sovereign Wealth Fund is a pool of funds owned and used by the central government for its own investment purposes. Just as Adam Smith predicted that sovereign states could and do acquire wealth, governments invest this money in businesses and real estate around the world to benefit their economies and citizens. Popular sources for funds include money from state-owned natural resources like oil and minerals, foreign currency operations etc. 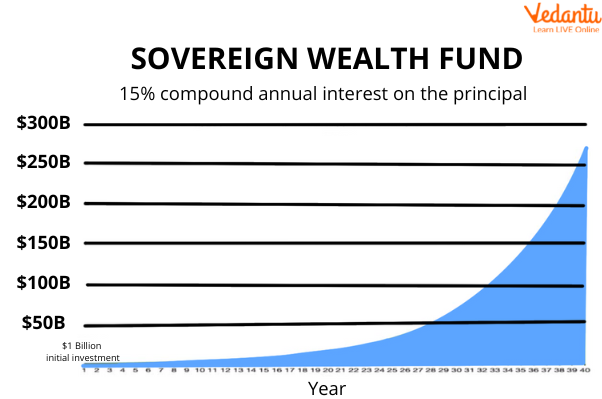 The History of Sovereign Wealth Funds

Some sovereign wealth funds may be owned by a central bank, which accumulates funds in the process of managing a country's banking system, and this type of fund usually holds major economic and fiscal importance. Other sovereign wealth funds are merely designated savings that various companies invest in for investment income and may not play a significant role in tax administration. Accumulated funds can come from foreign currency deposits held by central banks, International monetary funds, and special drawing rights. These are assets of sovereign nations and are typically held in domestic and other reserve currencies such as pounds, dollars, yen etc.

India surpasses China in sovereign wealth funds. Give points to support your answer.

Ans: India has quietly replaced China as the most sought-after destination for global sovereign wealth funds investments in the private sector which is seen as a sign of the country’s growing attraction for investors. According to the data by New York Global SWF, which tracks over 400 sovereign wealth funds in the year 2020 to date which is nearly three times more than what they have put in china, i.e., dollar 4,5 billion. It started in the year 2019 when a dollar of 10.1 billion was invested by SWFs in India, surpassing the $6.4 billion amount it did in china.

Few human creations represent the pinnacle of globalisation and sovereign wealth funds. Some state funds invest the revenues achieved by the government. Some other sources include budget surpluses and reserves. The Sovereign function is to stabilise the economy of the country through diversification and create wealth for future generations. The Sovereign Wealth Funds have grown significantly in influence over the last two decades, collectively managing more than $8 trillion in assets worth about 10% of the world's Gross Domestic Product.

FAQs on What is Sovereign Wealth Funds?

1. What is the role of a sovereign wealth fund in energy?

A Sovereign Wealth Fund is a pool of funds owned and used by the central government for its own investment purposes. The Sovereign function is to stabilise the economy of the country through diversification and create wealth for future generations. It has a crucial role to play in the energy sector. The investment decisions hold great importance as it helps to determine the pace of the ongoing energy transition and climate change mitigation. Conversely, the changing energy landscape also represents a significant risk to their portfolio allocations.

The popular sources of funds are discussed below in detail:

A Sovereign Wealth Fund is a pool of funds owned and used by the central government for its own investment purposes. The money often comes from the government’s surplus reserves and can be used to benefit the country’s economy and its citizens. The popular sources of funds include money from state-owned natural resources such as oil and minerals, foreign currency operations, bank reserves that may accumulate from budgeting excesses, transfer payments, money from privatisation, and so on.

It is a government-owned investment fund. Some of the major advantages of the Sovereign Wealth Fund are discussed below in detail to get a better understanding.