Inspired to create something innovative in the field of Science, Ashutosh Agarwal, a Vedan from West Bengal, has achieved the feat of securing a 99.99 percentile score in the JEE Main 2022 Exam in his first try. With this, he became the state topper of the JEE Main Session 1, 2022. 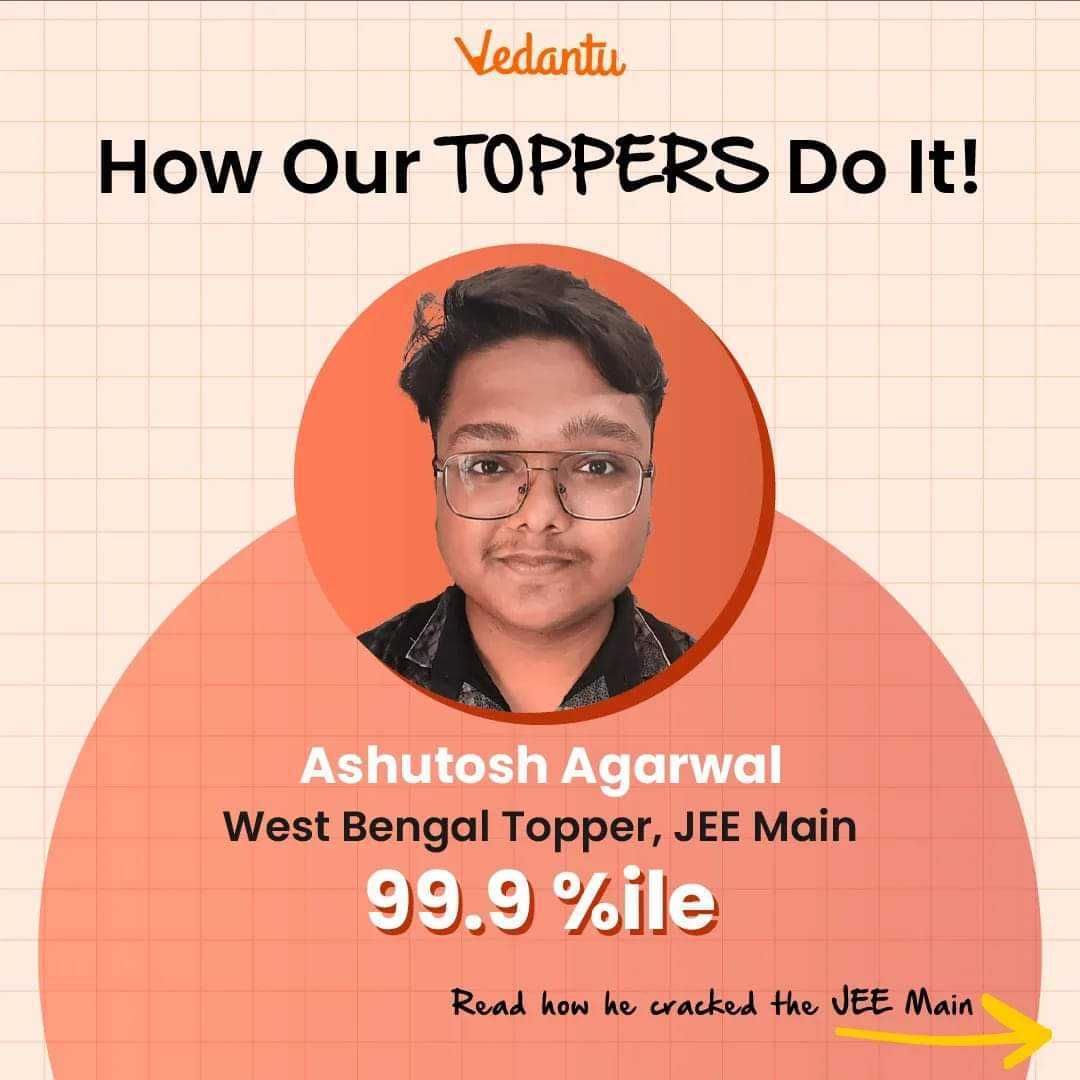 Ashutosh has been with Vedantu since his 11th standard and was promoted to the toppers batch for his JEE preparation after he qualified Vedantu’s Benchmarking Entrance Test. Gradually, he was admitted to Vedantu’s Eklavya Batch.

He said, “That [Toppers] batch was really amazing. And the Master Teachers were a great support. After that, in the month of January, I gave the Eklavya test and was admitted into the Eklavya program.”

According to Agarwal, he initially took a few classes at Vedantu as the ed-tech was offering free classes at that time, and admitted he had a great time studying, attributing his great learning experience to quizzes, mentors, and creative presentations included in the course.

An active participant of Vedantu Eklavya group discussions on the Telegram app, Ashutosh believed that the amazing peer-to-peer communication and constant doubt-solving support by his Master Teachers and Personal Teachers helped him significantly. He also mentioned that the pandemic didn’t hinder his JEE preparation as Vedantu’s Master Teachers guided him throughout his journey.

Below are some strategies as said by Ashutosh. These are the tried and tested JEE preparation strategies applied by JEE Main exam topper himself.

Here are the JEE Main Bengal Topper’s JEE Main and JEE Advanced tips and proper guidance to crack the exams in one go.

The topper highly advises to never study under pressure, as he also took scheduled breaks between his study sessions and ensured regular 8 hours of sleep amidst his tight study schedule, along with a well-balanced diet. He recommends that a maximum sitting of 2 hours should be followed by short 10-15 mins breaks, in which he played badminton or cricket - a tip that must be followed by all JEE aspirants.

What Worked for Ashutosh?

The topper had distanced himself from social media during his JEE 2022 preparation but remained active in groups of like-minded people to exchange preparation tips and notes, which is quite a good idea for competitive exam aspirants.

“I do not use Instagram or Facebook because they act as a distraction. In my preparation period, I only used Telegram," Ashutosh said.

He also claimed that the Vedantu Master Teachers supported and helped him at every step. He added, “My teachers always motivated me whenever I called them or got in touch with them on Telegram for any sort of guidance and even to just talk during stressful times. They cleared all doubts then and there, which was a great help. They helped me both – academically and emotionally.

With his success in his first attempt at JEE Main, the JEE Main West Bengal Topper has expressed his aspirations to prepare dedicatedly for the upcoming JEE Advanced exam, and he is aiming to pursue Computer Science at IIT in Bombay, Delhi, Madras, or Kharagpur.

Agarwal said, “We are 44 days away from JEE Advanced. So my focus is on JEE Advanced preparation. Mostly I’m giving tests for the same and analyzing my performance, especially in topics that I’m weak at, as per the content and guidance given by Vedantu Master Teachers and the tests in the Eklavya batch.”