A Short Brief on the Movement of Ants

If you've ever watched ants, you'll notice that they move quickly and agilely. And that perplexes us, since how can those three pairs of tiny legs support the full body's weight and move in that manner? An ant's walking pattern was analysed in a recent study. The ants use an alternating tripod method to walk. The front and back legs of one side, as well as the middle leg of the other, move together in this system.

They also keep themselves low and maintain a shorter distance from the ground. This method enables them to walk quickly while maintaining a low centre of mass. This allows them to move quickly and effortlessly when walking. They don't make any changes to this mechanism as they speed up. They just lengthen and increase the number of steps.

There are many songs and poems on ants. Let us look at one of them in this article.

The ants go marching one by one, hurrah, hurrah.

The ants go marching one by one, hurrah, hurrah.

The ants go marching one by one,

The little one stops to suck his thumb.

And they all go marching down,

To the ground, to get out, of the rain. 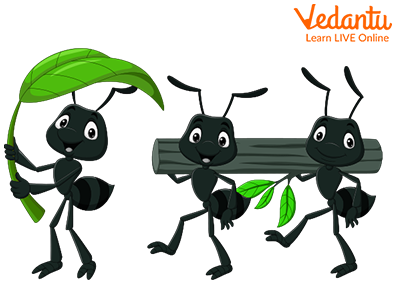 As it turns out, there's a slew of theories attempting to explain ants' perplexing behaviour. The most common of these theories is the one about unity. Ants celebrate their "anthood" in the same way that we celebrate human brotherhood. Ants are used to having relationships, prospering, and spending their entire lives with their nestmates. Thousands of ants can readily be found in a single colony. Furthermore, the majority of ants are blind and must live their entire lives in the dark (no pun intended).

As a result, it's critical for ants to be able to recognise and work with other ants in their colonies.

Consequently, when two ants crash or meet head-on, they thoroughly smell each other to ensure that they are from the same colony. Things could get tense if they find that it is not so! Thanks to their olfactory system, which can distinguish the fragrance left by an intruder from the scent left by one of their own, ants are surprisingly good at identifying intruders. When two ants from different colonies encounter, the ant without any other ants from the same colony nearby backs away and runs for its life!

Physical contact is a necessary element of their lives due to their lack of vision, which allows them to communicate and eliminate threats to their colonies. One explanation for why ants contact every other ant coming from the opposite direction is this. The other theory, on the other hand, is far more interesting.

How Do Ants Communicate with Each Other?

Given their huge numbers, an ant colony employs a variety of strategies to establish effective communication without developing into chaos. These millions of ants 'speak' to one another and complete their tasks perfectly. Let's take a look at each of their communication strategies one by one.

Each ant colony has its own distinct odour. The fragrance is created by a combination of pheromones. This allows them to tell the difference between a friend and a danger. This pheromone system is also utilised to assess the colony's position, from territory conquest to fundamental colonial activities.

For something as little as an ant, this method is quite advanced. If an ant discovers anything helpful for the colony, it will return to it. When it returns, it will leave a trail by dropping little amounts of pheromone. When it arrives at the colony, it will touch the other ants' antennas to give them a sense of what to expect when they reach the end of the trail. If the object is edible, the ant may carry a portion of it in its mouth and offer a taste to its fellow ants in order to gain a better understanding.

An ant's jaw response is triggered when it lightly brushes across a piece of another ant's body. This allows the ant to sample and learn about the food of the other ant.

Yes, ants communicate with one another. They do it by rubbing their legs against their bodies, which produces a variety of sounds. Because of their low resonance, humans will never hear them, but the other ants will comprehend exactly what they imply. If an ant gets caught in a tunnel, for example, it can send out a distress signal to notify other ants of its location. Pheromones will not be used in this situation because there is no method for the pheromones to reach the other ants.

We hope we have been able to help you learn something about these tiny creatures, ants, today. Their way of living, communicating and mechanism of defending themselves from threat are unique and intriguing aspects. If you enjoyed reading the article and would want to read and learn more on such interesting topics, visit our website today!

1. Why do ants go marching?

Pheromones, which are scent chemicals, are the reason ants march in a line. Pheromones are used by ants to communicate with one another. Pheromones are produced by ants to alert other ants to a nearby predator, to request assistance in defending the colony, or to reveal the location of a food supply.

2. How do ants go straight in a line?

Each ant species has a chemical vocabulary of up to 20 pheromones that can be released to create distinct smell trails. The chemical 'words' are translated by the tips of their antennae, leading the ants in a line to or from the chosen destination.