12 Months of the Year

Introduction to the Months of the Year

Which is your favourite month of the year? Is it your birthday month? Do you wish you were born in some other month? A year is divided into 12 months, where each one has its own properties. Seeing which months fall into which of the four seasons (winter, spring, summer, and fall) is an outstanding method to learn about the months in the year.

Teaching children about time is an important part of their growing up, especially during the seasonal changes. In this article, you can teach your children what these months indicate and their importance. We have also provided some helpful hints for teaching your children about the months of the year.

Ways to Teach Months to Children

Time and its transition is a valuable life lesson for children. As children get older, they begin to understand how much time it takes to complete a task, such as going to school, and they begin to use particular events to guide themselves, such as starting school, eating lunch, or returning home. Of course, all of this occurs in a short amount of time. Understanding about the 12 months of the year will help children understand long periods of time.

As birthdays only come once a year, one of the simplest methods to explain this issue to children is to talk about them. To help children grasp this, teach them the names of the months first, so they can figure out which month their birthday is in. They can also learn about significant festivals and celebrations, and they can begin to create their own calendar of key events to keep track of. 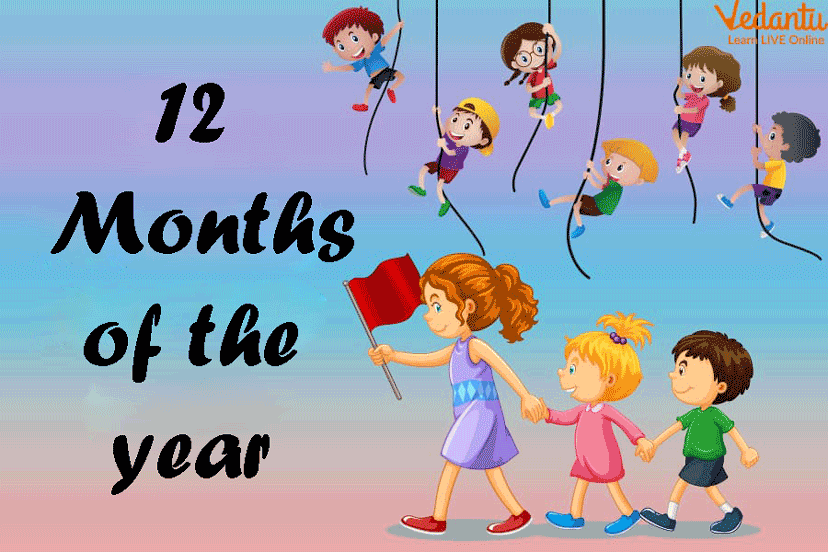 12 Months of the Year

It is, however, not a simple task. There's more to this subject than memorising the months and their abbreviations. It's also beneficial to teach children how many days each month has, as they differ from month to month, and how seasons link to each month.

Name of the 12 Months

Let us know the names of the 12 months in the year here.

The first month of the year is January. January has 31 days and represents the start of winter in the Northern Hemisphere, while summer is just getting started in the Southern Hemisphere.

It's the year's shortest month, and it's a special one! February generally has 28 days, but every four years it gets an extra day to make it 29. Leap day is the name given to this extra day.

April is a month of 30 days. It brings a lot of rain and windy weather to several parts of the Northern Hemisphere.

It is the fifth month of the year, and there are 31 days in it. May marks the start of Winter in the Southern Hemisphere and the end of Spring in the Northern Hemisphere, which lasts until June.

June is the sixth month of the year, with only 30 days. It brings cold temperatures to those in the Southern Hemisphere, while it marks the start of summer and sunny days in the Northern Hemisphere.

July is midsummer in the Northern Hemisphere, with 31 days.

A cold month in the Southern Hemisphere, signalling the end of the winter season. August is a month of 31 days. It's time to go to the beach and enjoy the sea in the Northern Hemisphere.

In the Northern Hemisphere, it's the ninth month of the year and the start of Fall. It also signifies the start of a new school year in many countries. September is a month of 30 days.

In some places, the leaves start to fall, while in others, the days are getting a little warmer, this month. The month of October is the tenth month of the year and has 31 days.

In November, the Northern Hemisphere experiences colder temperatures, while the temperature in the southern hemisphere continues to rise. It is the 11th month of the year and has 30 days.

Learning about the months in a year and their names is very essential to every student and should be taught at an early age of learning. It will help them know the features and importance of each month, including their birthday month and they can have fun sharing this knowledge with each other.

FAQs on 12 Months of the Year

1. How to make children recognize the months of the year easily?

It's essential to be able to see and recognize the names of the months. As some of the month names are more difficult to pronounce, games that read them aloud with accompanying pictures and seasonal qualities can really help your children get the complete picture. Whether they're formally reading them or not, your kid will learn to know the names of the months and associate them with the proper seasonal image.

2. How to use the seasons to learn the months?

Your preschooler is probably beginning to notice seasons, whether it's a shift in the weather or the diverse activities that occur at different times of the year. Discuss the four seasons and how they occur in the months of the year while teaching the months.