Table salt is made up of the elements sodium (Na) and chloride (Cl). Both elements are found linked together in nature as the compound sodium chloride rather than occurring independently and freely.

Common salt is made from seawater that has evaporated and is majorly extracted by the process of crystallisation of the brine solution.

Common salt can serve as the raw material for the production of sodium hydroxide. Hydrogen gas and chlorine gas are the byproducts of the process. Baking soda or sodium hydrogen carbonate, washing soda or sodium carbonate decahydrate and bleaching powder or calcium hypochlorite can also be obtained as a product of common salt. Common salt can be used as a preservative for pickles and for preparing food. Common salt is employed in the production of soap and in the melting of ice.

How is Salt Obtained from Seawater?

Large-scale sources of sodium chloride include common salt that is made from seawater. To obtain the salt seawater is first trapped in big shallow pools and left to stand. The common salt is left behind as the water gets slowly evaporated into vapour under the heat of the sun.

The obtained common salt is then purified from its impurity by the process of crystallisation. Crystallisation is the process of purification of a compound from a concoction. For this, the substance is heated until it dissolves in a solvent or mixture of solvents. By letting some of the solvents evaporate, the mixture is concentrated. Crystals of the pure chemical are precipitated due to cooling the solvent. The final product is obtained by filtration followed by drying. Hence, salt is obtained from seawater by the process of evaporation and it is a physical change.

When the temperature rises, a liquid transforms into its gaseous state, which is known as evaporation. High energy molecules leave the liquid's surface during evaporation, which has a cooling effect. Sea and ocean water both contain significant amounts of salt. It is created when sodium and chlorine ions mix in water. This salt is frequently used for cooking and other purposes.

Rock salt is a common salt that has been extracted from subsurface sources. Rock salt is composed of huge crystals of common salt. Similar to coal, it is removed from an underground deposit. 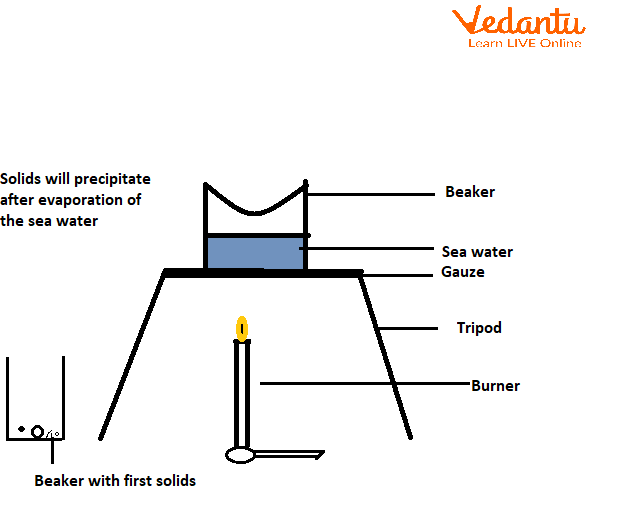 Process of Obtaining Salt From Seawater

Reverse osmosis is a method, in which the water is allowed to pass through a permeable filter eventually increasing the concentration of salt as the water is pushed out. This method is very expensive and can be used to separate salt for a few Litres of water only.

Another popular method is Electrodialysis. Water is poured into a big container in this process which involves adding a porous membrane between a negatively charged anode and a positively charged cathode. The anode then draws the positive sodium ions when the electric current is transferred, whereas the cathode attracts the negative chloride ions leaving water behind. As a result, salt and water are separated. Salt can also be obtained from sea water chemically. The seawater and decanoic acid are combined in a container, and the mixture is then heated. The solution is cooled after a while. The salt is formed during cooling and settles to the bottom of the container as precipitates. Decanoic acid and water combine to generate two layers that can be removed individually.

FAQs on Chemicals from Common Salt

1. What is caustic soda and mention its uses?

The transitional state of a compound or an element is known as vaporisation, and it takes place during the boiling or sublimation processes.The force of attraction between the molecules weakens as kinetic energy rises. They consequently escape into the environment as vapours. Heat energy is utilized in this process.Vaporization can be categorized into boiling and evaporation.The factors impacting the rate of vaporization include the following-, surface area, temperature, wind speed  and pressure.

3. What do you mean by physical change?