All About English Grammar Class 5 - The Noun and Its Kinds

In Class 5 English Grammar syllabus, you have a chapter on nouns which is essential for you to learn. Do you know what a noun is? What are the types of nouns? The noun refers to a naming word. It names things like places, people, ideas, and other things.

For example, Rohini is playing; I am a girl. The words ‘Rohini’ and ‘girl’ are nouns in these two sentences. In Class 5 English grammar syllabus, the noun is taught. In this article, we will learn various types of nouns.

In English grammar, there are 6 types of nouns. They are described below.

Common nouns refer to the noun which names a common type of things, places, and persons.

Collective nouns are nouns that name a collection of things, animals, and persons.

Example: a flock of birds, a galaxy of stars, a pair of socks.

Here, the words ‘flock’, ‘galaxy’, and ‘pair’ are the collective nouns.

Abstract nouns refer to the noun name of something that no one can touch or see but think about.

Material nouns are nouns that express a material from which things are made.

In today’s lesson, we will discuss noun and their types. We will begin with the understanding of nouns. Then we will see examples of the noun. A noun in simple terms is a naming word. Moving ahead we will learn about different types of nouns. Practice questions and solved examples are given throughout the article for better understanding and concept clarity. Let’s begin the journey on this amazing topic.

What is a Noun?

A noun is a term that designates a certain person, place, object, or notion. Man, Ram, India, table, and car are a few examples. 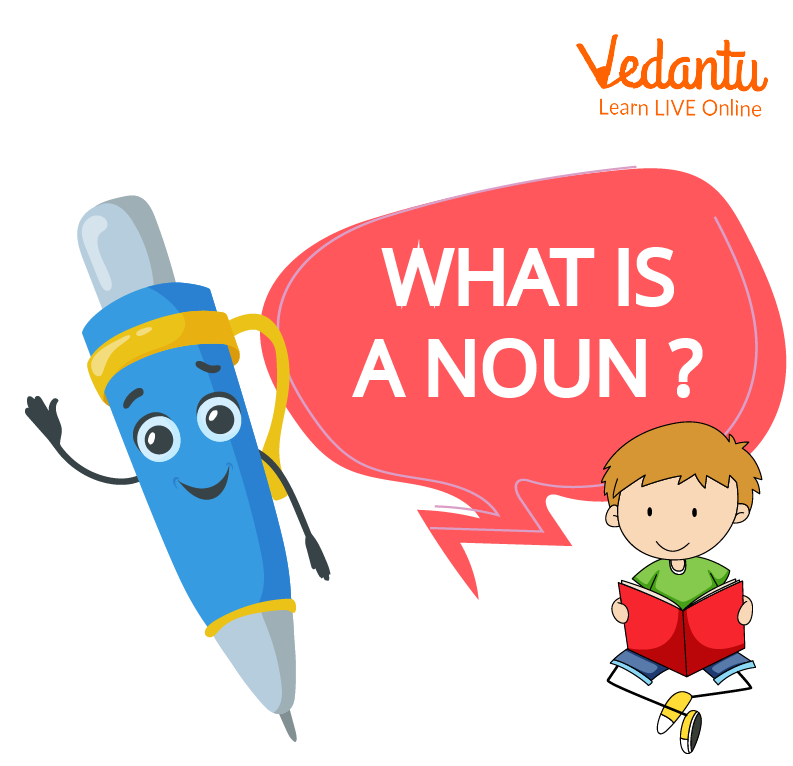 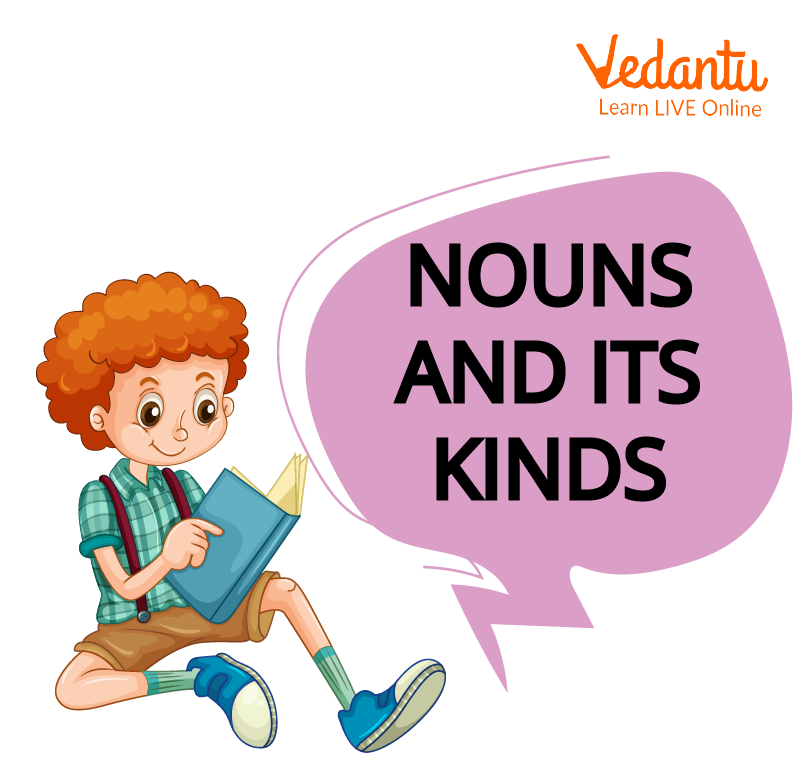 Noun can be divided into five following groups:-

A common noun is a name used to refer to any individual, location, or object generally.

Proper nouns are names given to specific people, places, or things.

Abstract noun is the name of anything we can think about rather than something we can see or touch.

Adjectives, verbs, and ordinary nouns can all be used to create abstract nouns.

By the addition of ness to the given word

Addition of ‘th’ and change in Vowels

A collective noun is a term used to refer to a group of people, animals, or things viewed as a whole.

Substances or materials are referred to as material nouns.

A. Identify the type of noun for each of the following.

C. Underline the nouns in the given sentences.

C. Identify the nouns in the given sentences.

Benefits of Learning Nouns and Its Kinds for Class 5

Examples of the Noun and Its Kinds for Class 5

There are many interesting facts about nouns:

Important Topics of the Noun for Class 5

In the Class 5 English Grammar syllabus, you will learn nouns. The important topics of this chapter are as follows:

Class 5 English the Noun and Its Kinds Free PDF Download

Vedantu’s experts will provide the online classes on the noun for Class 5. Students of Class 5 can check the online English grammar classes from Vedantu’s website. We hope the kids will benefit from attending these classes.

At first appearance, the noun definition is simple: they are name words that refer to a person, place, thing, or idea. They're undoubtedly the most significant part of any phrase because they're usually the subject. They can also be the sentence's immediate object. A noun is a person's, place's, or thing's name. The term "thing" refers to objects that we can see, touch, taste, feel, and hear. It also includes things that we can only think about but neither see nor touch. There are different types of noun based on which category the naming words fall into.

1. What are special nouns?

Abstract nouns are also known as special nouns as these types of nouns express things that we can’t touch or see but think about or feel.

2. What type of noun is school?

School is a common noun, but if the exact name of a school is mentioned, then it becomes a proper noun.

3. What type of noun is the word ‘Childhood’?

The word ‘childhood’ is an abstract noun as it can’t be seen or touched by anyone.