Famous Bell and the Cat Story with Pictures

Bell and the Cat - The Famous Bedtime Story

The short bedtime stories are always interesting to hear, aren't they? They are captivating, amusing and never fails to grab the interest of young minds. They not only nurtures the creative mind of the young but also teaches the small values that are quite important in becoming the ideal person in life. They are the small life lessons that are inculcated in the mind of the young through interesting and engaging stories, famously known as bedtime stories.

After a day-long activity of the children playing around, running, jumping and the infinite activities that they involve themselves in, it is not an easy task to put them to sleep. Thus the bedtime stories are created. They not only help in creating a bond between the parents and their kids but also help in developing their imagination. The children tend to learn new words in a playful mode and also subconsciously develop the habit of reading which is one of the most necessary skills for a person in the learning process.

So here, we bring to you the famous belling the cat story in English with many illustrations to make the reading even more attractive and interesting for the kids. You can also download the colourful PDF form of the “bell and the cat” story from the site of “Vedantu” through the link that is provided below. And it is all free! It is a story about a cat and a few mice out of which one mouse made all his sincere efforts to accomplish the impossible task of belling the cat. This was done to benefit their entire community.

We hope that the kids enjoy reading the Belling the cat story in English thoroughly. We also have a series of other moral bedtime stories for kids that includes stories for children like Panchatantra stories, fairy tales, etc.

Bell and the Cat Story in English

Once upon a time, there was a big grocery store in the heart of the city. The store was flourishing but the only problem the shopkeeper faced was that there were plenty of mice residing in the store. They used to bite into every pile of the stock bags kept there in the shop. Days after days they wasted many food products that were brought by the shopkeeper to sell like loaves of bread, biscuits and fruits. The shopkeeper grew worried by the loss caused by the mice. He finally decided to bring in a cat and leave it in the shop to keep a check on the troublemaker mice. 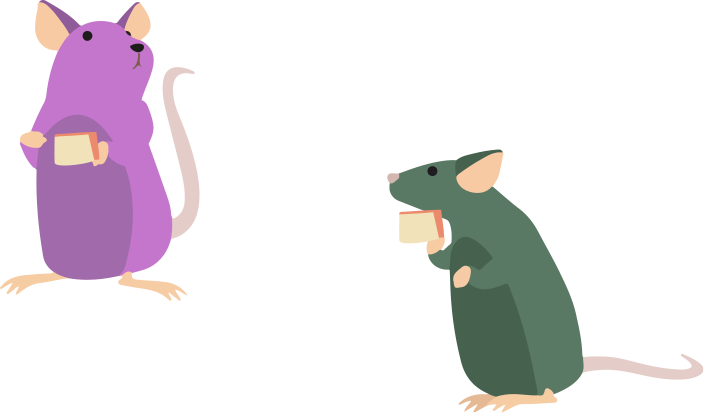 Image: Illustration of mice eating the bread in the store

The very next day, the shopkeeper brought a fat cat into his grocery store and set her free. She started chasing the mice every now and then. She had a very pleasant time hunting down the mice and feasting on them regularly. The cat grew bigger and bigger and the shopkeeper too became happy with his decision of bringing the cat to his shop. And why not! It saved him from a lot of damage that was caused by the mice.

Slowly and steadily the population of mice in the grocery store started to fall down. The mice became more and more concerned with their dipping population as the cat kept preying on their fellow mice each day. As their concern grew more and more, they finally decided to call a council meeting to discuss their problems.

Soon the council of the mice took their problem to the head mouse. They discussed how their population is dropping day by day and it became impossible for them to know where their predator is. This was making them more vulnerable to getting caught by the cat. Soon the head of the mice came up with a brilliant idea of belling the cat. This would solve all the problems of the mice. Belling the cat would allow them to know where the cat is because every time it will move, the bell in the neck will ring. Image: Illustration of the council of mice discussing their problems

Though the idea was liked by every member and all became happy to hear a brilliant solution to their problems. But soon their happiness came to a still as now the question arose who will risk their lives in order to bell the cat. All was quiet and no one spoke. Suddenly a tiny mouse came forward and agreed to execute the plan himself of belling the cat. All he asked was neckless of three bells tired in a pink ribbon.

That afternoon, the little mice along with the neckless went to the cat with a clever plan. As the cat saw the tiny mouse she was about to stumble on the mouse for her afternoon meal. But as she was about to kill the mouse, the mouse pleaded to the cat to listen to him once before feasting on him. As the cat gave him the chance, he started admiring the beauty of the cat saying that “he never saw such a beautiful cat in his lifetime”. He went on and on praising the cat for her beauty and finally took out the neckless. He then said to the cat that if she wears this handmade neckless that was specially made by him, she will look like the prettiest cat in the world. Image: Tiny mouse talking with the cat to wear the bell necklace

Listening to him, the cat in joy quickly wore the neckless and jumped onto a chair to look at herself into the mirror placed right in front of her. As the tiny mouse kept on praising and admiring her beauty she finally out of sheer joy and happiness, decided to spare the mouse with his life. But soon that afternoon, her stomach started rumbling with hunger and she soon wanted a mouse to feed upon. But as she started moving around the bell in her neck started belling. And the mice soon disappeared from her site. Lastly, the mice became happy and no longer feared the cat. As they could hear the sound of the bell ringing and disappeared from her sight immediately. Moral of Bell and the Cat Story

The moral that we learned from this beautiful story is that “have the courage to face the toughest situation in life and never get swayed away by the praises that you get from others without analyzing the situation.”

FAQs on Famous Bell and the Cat Story with Pictures

2. What was the need to bell the cat?

As the cat in the grocery store grew more and more ferocious and was feeding on the mice regularly. Thus their population began to drop aggressively. They were not able to assess where the cat was coming to fetch them. Hence out of concern they formed a council and decided to bell the cat.