Agriculture is one of the most important sectors in the country. Derived from Latin, where the words “agri” or “ager” mean soil and culture means cultivation, this sector has been responsible for feeding almost two-thirds of the Indian population. Agriculture can be called a primary activity, which includes the growing of vegetables, fruits, crops, flowers and also rearing livestock. Students can learn more about the chapter from Agriculture Class 8 Revision Notes.

It is known to us that about 50% of people worldwide have agriculture as their main activity. With the help of the summary that we have provided here, students can learn more about it easily and score good marks. 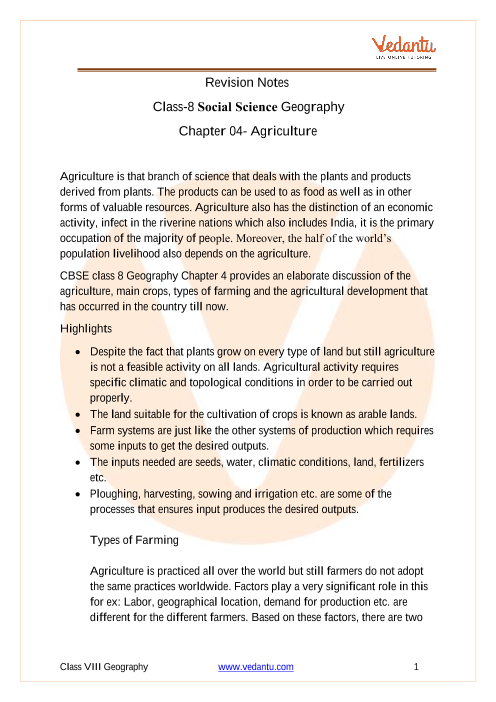 Agriculture is that branch of Science that deals with plants and products derived from plants. The products can be used as food as well as in other forms of valuable resources. Agriculture also has the distinction of economic activity. In fact, in the riverine nations, which also includes India, it is the primary occupation of the majority of people. Moreover, half of the world’s population's livelihood also depends on agriculture.

CBSE Class 8 Geography Chapter 4 provides an elaborate discussion of agriculture, main crops, types of farming and the agricultural development that has occurred in the country till now.

Agriculture is practised all over the world, but still, farmers do not adopt the same practices worldwide. Many factors play a significant role in this; for example, labour, geographical location, demand for production etc., are different for the different farmers. Based on these factors, there are two significant types of farming: Commercial Farming and Subsistence Farming.

It is practised where there is limited availability of labour for the production of crops. It is not aimed to meet the high demands of production, and they also use low levels of technology.

It is practised in places which have quite long summers as compared and have rich fertility of the soil.

Rice is the major crop that is grown in this type of farming. Other crops include wheat, oilseeds, maize, and pulses. This farming is mostly practised in the regions of South Asia, East Asia and South-East Asia.

In this type of cultivation, a piece of land is chosen by a farmer, who then cuts all trees on that land. The ashes of the trees are then mixed with the soil of the land, which increases its fertility. The farmer then grows crops on that cleared land until it does not lose fertility. After that, they move to the next piece of land and repeat the entire process again.

Due to adverse climatic conditions of the region, the farmers select a certain route for themselves so that they can sustain themselves. In this way, they practice herding in the different areas of the same route.

A large variety of crops are grown in different regions of the world to meet the requirements of a growing population. Some of the important crops are:

1.  Discuss the disadvantages of shifting cultivation.

2. Discuss the importance of agriculture.

Ans: Agriculture contributes to the national income of a developing country however, for developed nations, it contributes very less. It is important for the food and fodder demand of the population as well as animals. Agriculture contributes to the marketable surplus. With the development of a country, more people get engaged in the non-agricultural sectors like mining, manufacturing etc. As agriculture expands, it leads to the expansion of a marketable surplus which the nation can also export to different countries.

The following are some of the important benefits of Class 8 Revision Notes Geography Chapter 4 - Agriculture.

Thus, refer to the expert-curated Revision Notes for CBSE Class 8 Social Science Geography Chapter 4 - Agriculture if you are preparing for the topic and feeling stuck. It is the best study material for the students in the market. Therefore, by going through the concepts presented in Vedantu’s revisions notes of Chapter 4 - Agriculture of Class 8 Geography, students can ensure their overall preparation for the exam and can ace their examinations with remarkable marks. You can also find the other study materials like Class 8 NCERT solutions, important questions, syllabus, and previous years’ question papers on our website.

1. What exactly is agriculture?

Agriculture is a primary activity which includes the process of cultivating crops, fruits, flowers, vegetables, and rearing livestock.

2. What are the different factors influencing agriculture?

Climate and soil topography are the main factors influencing agriculture.

A specific type of farming for commercial purposes where people would grow only a single type of crop, such as coffee, tea, cashew, rubber etc., is known as plantation agriculture.