NEET 2022 is one of the most important exam for the students who wish to study medical and become doctors. But, while preparing for NEET 2022, they will need a lot of guidance and information. This article is created keeping NEET 2022 aspirants in mind. It contains notes and important questions related to the animal kingdom and it will be great for last-minute revision.

It covers all the important concepts such as body symmetry, segmentation and metamerism, characteristics of different phyla, classes and their examples, etc. These concepts are short, crisp and important for NEET. Along with this, it contains FAQs regarding the NEET exam.

Animals are classified on the basis of their coelom, body symmetry, digestive system, circulatory system, and reproductive system patterns among other factors.

1. Cellular Level- The body consists of many cells which may be similar or show minor division of labour e.g., sponges.

4. Organ-System Level- The cells are organised into tissues, tissues into organs and organs into organ systems, e.g., Aschelminthes to chordates.

It can be incomplete or complete.

(2) Complete Digestive System- In this type of digestive system there are two openings, the mouth and anus.

(i) Protostomes- The mouth of the digestive tract develops first in the embryo and the anus is formed later. This occurs in flatworms, roundworms, annelids, molluscs and arthropods.

(ii) Deuterostomes- The anus of the digestive tract develops first in the embryo and the mouth is formed later. This is seen in echinoderms, hemichordates and chordates. As a result, chordates are closer to echinoderms in terms of evolution.

It is also of two types:

(1) Open Type-  In this, the blood is pumped out of the heart and the cells and tissues are directly bathed in it. Examples: Arthropods and Molluscs.

(2) Closed Type- In this, the blood is circulated through a series of vessels of different diameters (arteries, veins and capillaries). Examples: Many Annelids (e.g., Earthworm) and most of the chordates.

1. Asymmetric - When the body is not divisible into equal halves by any plane, it is called asymmetric. For example; sponges.

2. Radial Symmetry - In this type of symmetry, the body of the individual can be divided into equal halves by any plane passing through the centre from top to bottom. This type of symmetry is found in some sponges (Sycon), cnidarians (e.g., Hydra, jellyfish), and echinoderms (e.g., starfish).

The radial symmetry is called biradial symmetry when the body may be divided into two similar halves by only one or two vertical planes. For example; Sea anemones.

3. Bilateral Symmetry - The body can only be divided into two equal halves by a single plane in this type of symmetry because the essential body organs are paired and occur on opposite sides of a central axis. Many invertebrates and all vertebrates have bilateral symmetry.

4. Spherical Symmetry - In spherical symmetry, an organism can be cut from any plane and even then it will be able to divide into two equal halves. For example; Volvox These germinal layers form the body of the animals. It is the division or differentiation of the body into distinct portions called segments. It is of two types:

The cavity which is lined by mesoderm is called coelom.

Animals that lack a coelom are known as acoelomates. For example; Sponge, cnidarians, ctenophores, and flatworms.

The animals which possess true coelom are called coelomates. The true coelom is a body cavity that arises as a cavity in the embryonic mesoderm. In this case, the mesoderm of the embryo provides a cellular lining called the peritoneum. For example; Annelida Arthropoda Mollusca Echinodermata Hemichordata Chordata. 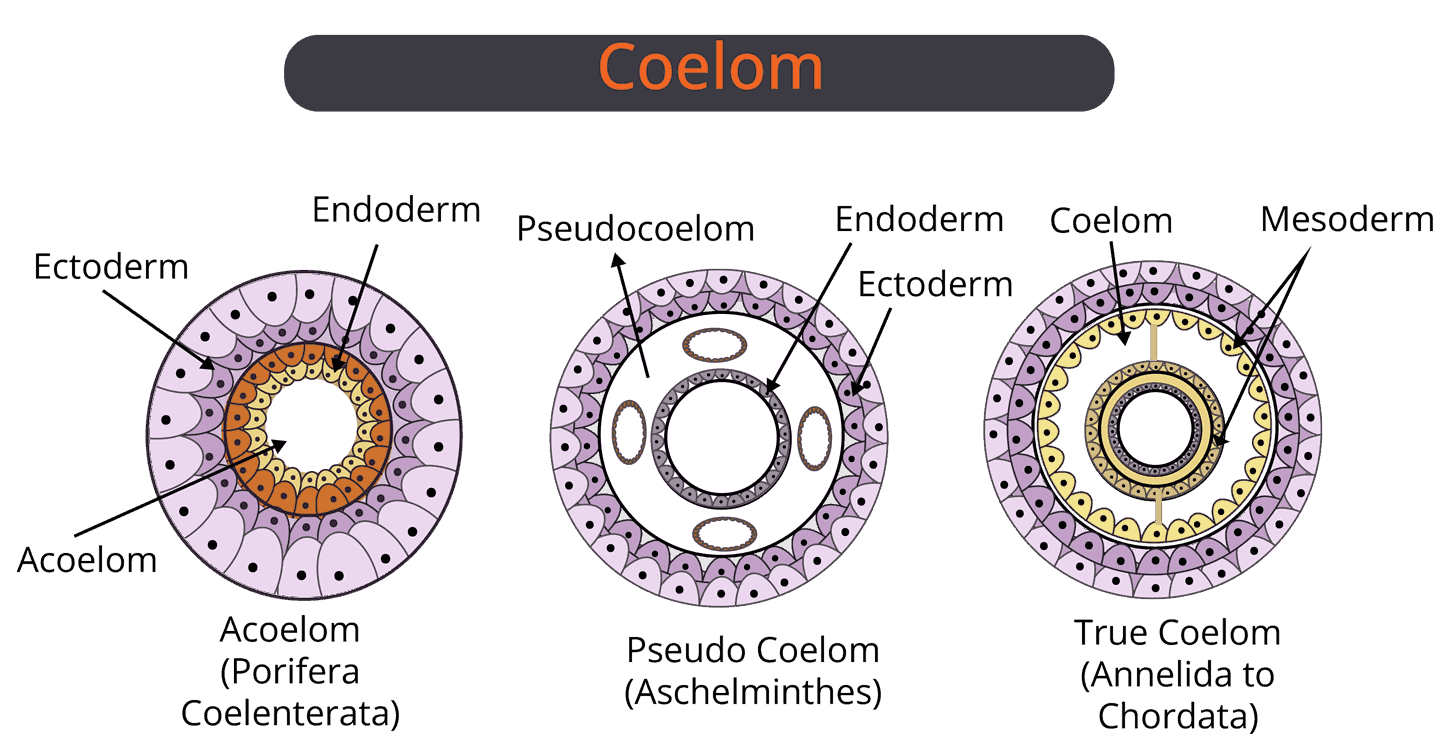 1. The types of cells found in some animals are listed below. Which of the following cells has the ability to differentiate and perform multiple functions?

Interstitial cells are reserve cells that can differentiate into any form of cell. Stinging cells are employed for both offence and defence. The gastrodermis is lined with gastrodermal cells and intracellular digestion occurs within these cells. Cnidarians have all of these cells. In sponges, choanocytes, also known as collar cells, are specialised flagellated cells that border the spongocoel and canals.

2. Which of the following animal pairings has skin that isn't glandular?

a. Snakes and frogs

b. Chameleon and Turtle

Ans: b. Chameleon and Turtle

Amphibians have glandular skin, which means they have glands on their skin to keep it moist. In mammals, these glands include sweat glands and sebaceous glands. Ave's skin is dry and lacks glands, with the exception of a preen/oil gland at the base of the tail. Glands are absent in reptiles. As a result, the skin of the chameleon and turtle is non-glandular.

Function of an Oil Gland in Birds at the Base of the Tail - It produces the oil that is distributed on the feathers during the preening process.

1. The most poisonous fish is

Puffer fish species are the most dangerous in the world, and after the golden dart frog, the second most poisonous vertebrate. The active agent, tetrodotoxin, which is found in the inner organs and frequently in the skin, paralyses human victims' muscles, allowing asphyxia to kill them.

The poison present in Puffer fish is tetrodotoxin.

2. Which of the following species is matched correctly to its named taxonomic category?

a. Tiger - tigris, the species

b. Cuttlefish - Mollusca, a class

Ans: a. Tiger - tigris, the species

The scientific name of tiger is Panthera tigris

Mollusca is a phylum, not a class and cuttlefish belong to order Sepiida.

Primata is not the name of a family, it is an order of class Mammalia.

The genus name for housefly is Musca.

1. Flame cells are the excretory organ of

The simplest freshwater invertebrates, including platyhelminthes, have a specialised excretory cell called a flame cell. Flame cells remove the waste products from the body of these animals.

Key Point to Remember: Flame cells perform the same function which the kidney does in mammals.

2. Phylum Porifera is classified based on

Poriferans are sessile, lack true tissues and have no bodily symmetry. The presence and composition of spicules are used to classify the phylum Porifera.

Key Point to Remember: Poriferans are also known as sponges because of the presence of numerous pores on their body.

This article is created keeping in focus the NEET aspirants. It covers all of the major concepts and provides clear explanations of the important or complicated topics of the chapter, making it ideal for quick and successful revision. It covers key ideas, concepts, and problems from previous year's NEET question papers, as well as, NEET practice tests and Biology NCERT. Make sure to test your understanding by attempting the practice questions on your own.

1. Is NEET really so difficult?

NEET is, without a question, a difficult and demanding exam. We are talking about the country's single-level medical entrance examination, which attracts thousands of students and has a restricted number of places available in coveted institutions. But, right preparation makes it easy to crack.

2. What is the number of questions that are asked from Animal Kingdom in NEET?

The number of questions that come from this chapter are about 3.

3. Is NCERT sufficient for the Animal Kingdom from NEET point of view?

No, although the NCERT books are sufficient to qualify for the examination, extra books must be consulted in order to achieve a high score or rank. Moreover, your study of the books should be supplemented with practising questions from sample papers, previous year questions, etc. to stay thoroughly prepared for the exam.