This article is created by keeping NEET aspirants in mind. It contains notes and important questions related to the plant kingdom and it will be great for last-minute revision.

It covers all the important concepts such as the difference between monocot and dicot root, simple and permanent tissues, etc. and these concepts are short and crisp. Along with this, it contains FAQs regarding the NEET exam.

A tissue is a collection of cells with a common origin that collaborate to perform a common function.

It is a type of simple tissue that consists of a group of similar and immature cells (meristematic cells) which can divide and form new cells.

Due to morphological, biochemical, and physiological differentiation, cells in these tissues have lost their ability to divide and have taken on a permanent shape, size, and function.

(a) Simple Permanent Tissue: The tissue is made up of similar permanent cells that carry out the same function. It is further divided into three types:

(b) Complex Permanent Tissue: They contain more than one type of cells and all the types of cells work together as a unit.

It is a tissue or a group of tissues that are derived from a portion of meristem which performs a similar function.

On the basis of their location and structure, there is three tissue system in plants.

Difference between Xylem and Phloem

Difference Between Dicot and Monocot Root

Difference between Dicot and Monocot Stem

Difference between Fascicular and Interfascicular Cambium 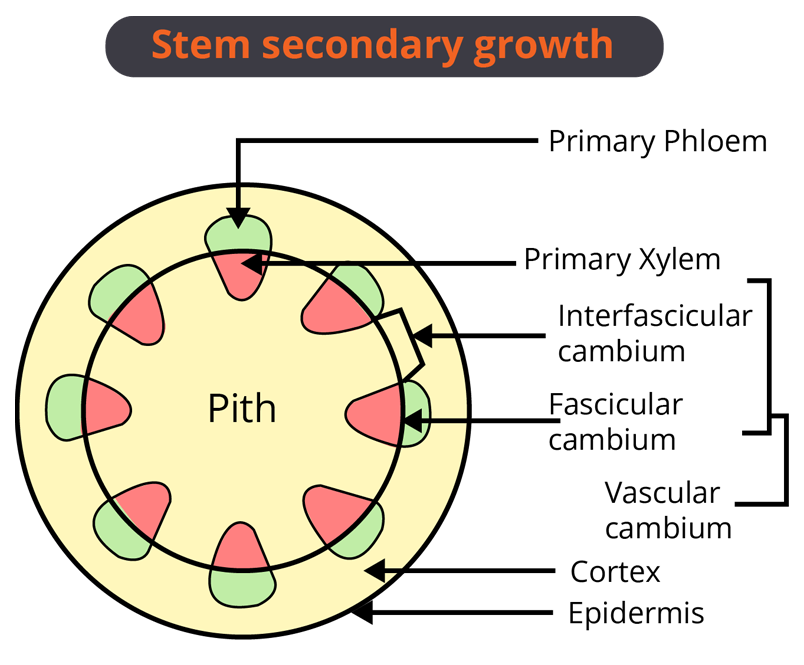 Difference Between Dicot and Monocot Leaf

1. Why xylem and phloem are known as complex tissues?

Ans: Xylem and phloem are known as complex tissues because they are made up of more than one type of cells and these cells work in coordination to perform various activities.

2. How do tree trunks get their growth rings? What is its significance of it?

1. The vascular cambium typically gives rise to one of the following anatomical structures?

The ring of vascular cambium produces secondary xylem on the inner side and secondary phloem on the outside. Both are in the form of rings.

2. There is one old piece of dicot stem and one piece of dicot root. So, which of the following anatomical structures will be used to distinguish between the two?

The position of the protoxylem distinguishes the old dicot root from the dicot stem. Protoxylem is oriented toward the pith (endarch xylem) in the stem and toward the periphery in the root (exarch xylem).

1.  In plants, healing of wounds takes place by the activity of

It is a type of lateral meristem. Here, some of the permanent cells acquire the power of division (called dedifferentiation). This meristem gives rise to secondary tissues such as vascular cambium of the root, interfascicular vascular cambium of stem, cork cambium or phellogen, and wound cambium (from the cells surrounding an area of injury or wound).

Key to Remember: Secondary meristem responsible for growth in girth

2. The vascular cambium, on one side, produces xylem and on another side produces phloem due to its

b. Differential action of hormones

Ans: b. Differential action of hormones.

Intra and interfascicular cambium unite to form a ring of cambium known as vascular cambium in the stems of dicotyledonous plants, producing secondary xylem on the inner side and secondary phloem on the outer side. Hormonal influences play a role in this.

This post is written keeping in focus the NEET aspirants in mind. It covers all of the major concepts and provides clear explanations, making it ideal for quick and successful revision. It covers key ideas, concepts, and problems from previous year's NEET question papers, as well as NEET practice tests and Biology NCERT. Make sure to test your understanding by attempting the Practice question on your own.

1. What is the weightage of the chapter Anatomy of Flowering Plants?

The chapter Anatomy of Flowering Plants carries 6% of the weightage in NEET.

2. What is the number of questions that are asked from Anatomy of Flowering Plants in NEET?

The number of questions that come from this chapter is 3.

3. How do I find out if my NEET application has been rejected?