In NEET Chemistry, the topic “Aldehydes, Ketones and carboxylic acids” is very essential. Aldehydes, ketones, and carboxylic acids (COOH) are found in large amounts in both plants and animals. They (R-CHO. R-CO-R and COOH) serve a crucial function in life's metabolic processes. They are used to flavour a variety of foods and medications.

As a result, the total weightage of this chapter in the NEET exams is up to 4 percent. In this aldehydes ketones and carboxylic acids notes, aldol condensation, Grignard reaction and Cannizzaro Reaction are a few of the concepts that are covered in this article.

Aldehydes and ketones belong to a class of compounds having general formula CnH2nO and are represented as RCHO and RR'CO respectively.

Methods of Preparation of Aldehydes

Oxidation can be affected with acidic K2Cr2O7 or with PCC (Pyridine Chlorochromate, mild oxidising agent) in CH2Cl2

3. By Heating a Mixture of the Calcium Salts of Formic Acid and any one of its Homologues

Methods of Preparation of Ketones 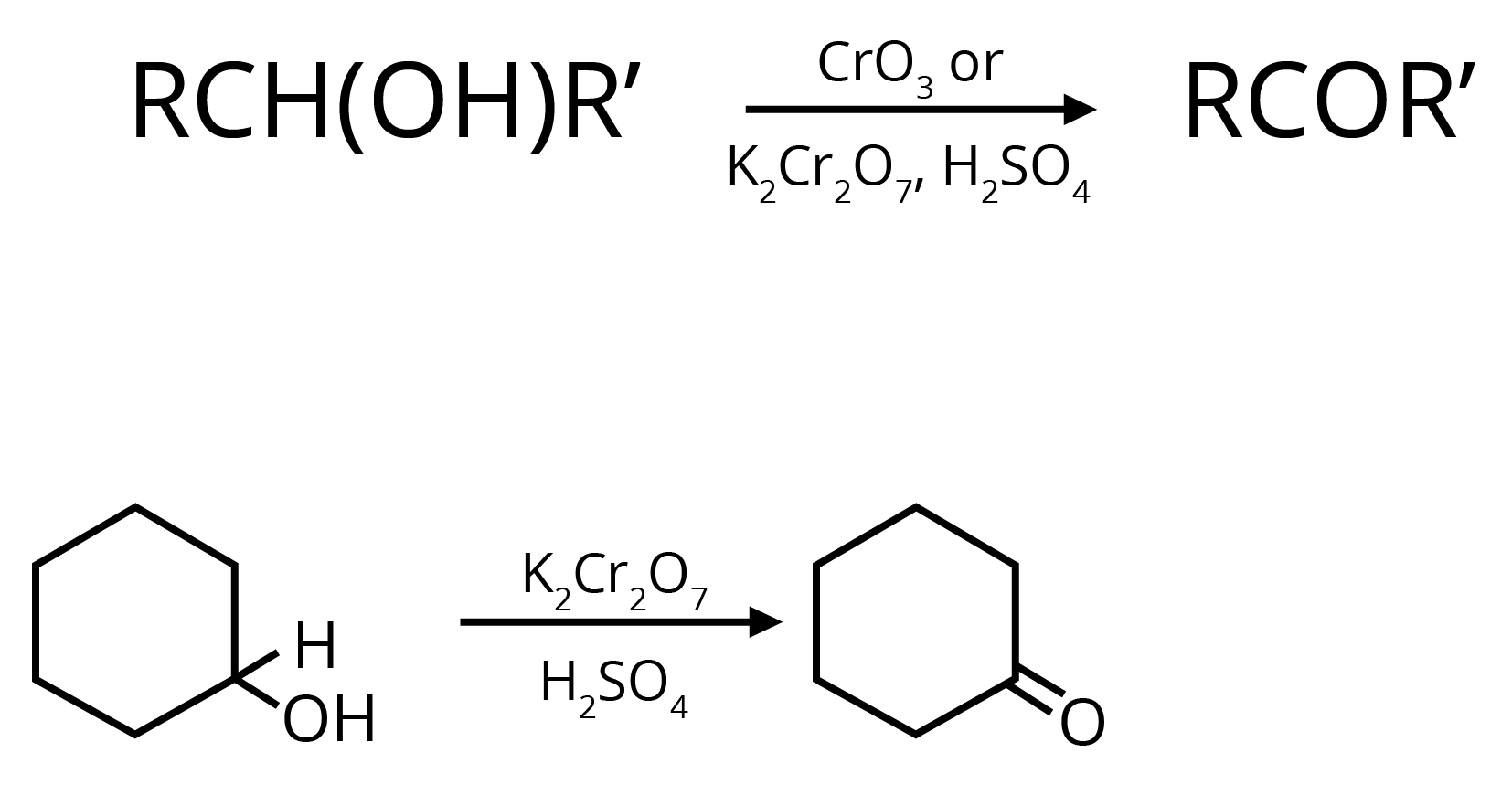 2. By Heating the Calcium Salt of any Monocarboxylic Acid other than Formic Acid

Methods of Preparation of Carboxylic Acids

1. By Oxidation of Primary Alcohol

2. By hydrolysis of Cyanides

Physical Properties of Aldehydes and Ketones 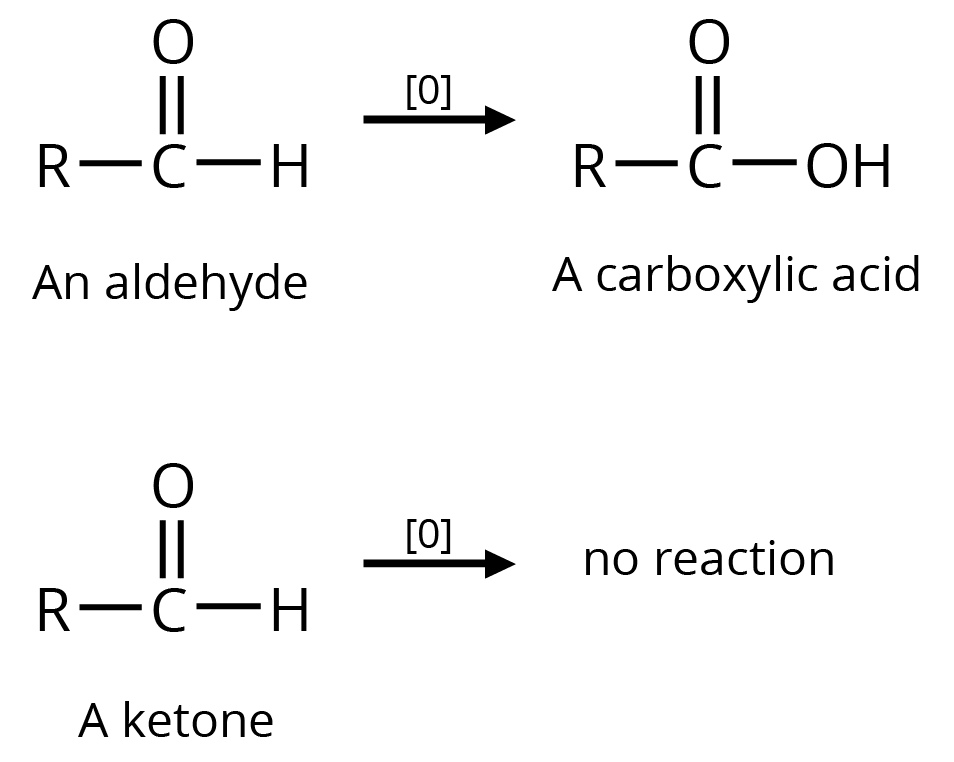 A specific oxidant for RCHO is Ag(NH3)2+. Ketones do not give this reaction

Ketones resist mild oxidation, but with strong oxidants at a high temperature, they undergo cleavage of the  C-C bond on either side of the carbonyl group.

CH3COR are readily oxidized by NaOI (NaOH + I2) to iodoform, CHI3, and RCO2Na.

(a) Reduction to Alcohols

Reduction to alcohols can be achieved either by hydrogenation in the presence of Pt or Pd or by LiAlH4/NaBH4. 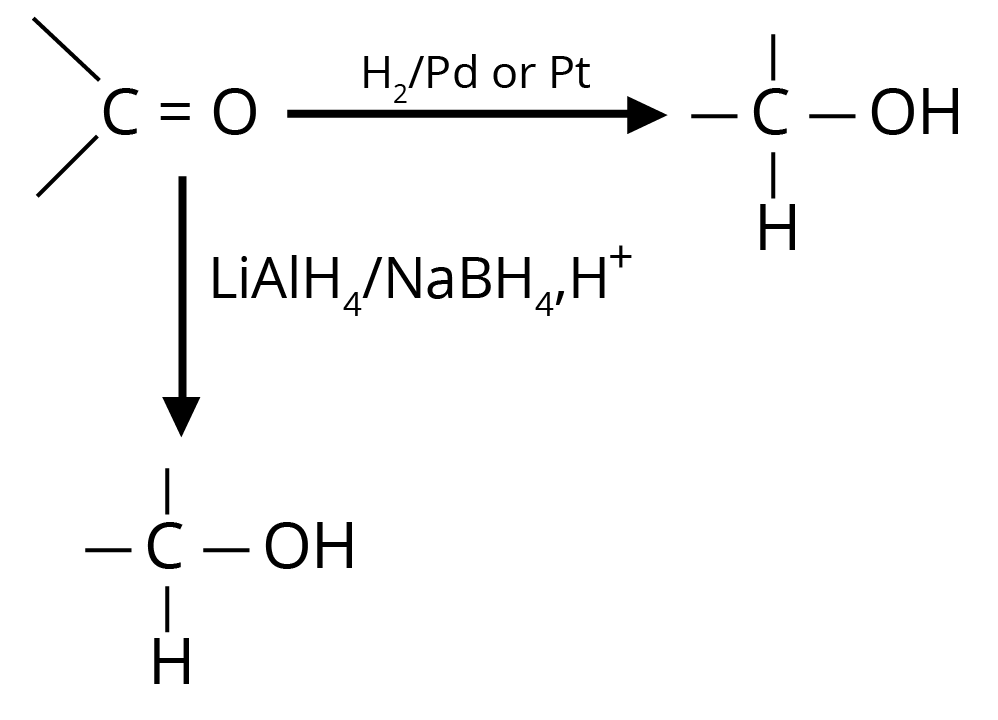 (b) Reduction to Hydrocarbons

The carbon of the carbonyl group is electrophilic and thus initially attacked by a nucleophile.

(a) Addition of Grignard Reagent

(b) Addition of Hydrogen Cyanide

Bisulfite compound formation is confined to aldehydes, methyl ketones and some cyclic ketones.

The carbonyl compounds react with alcohols, R'OH, to yield hemiacetals. 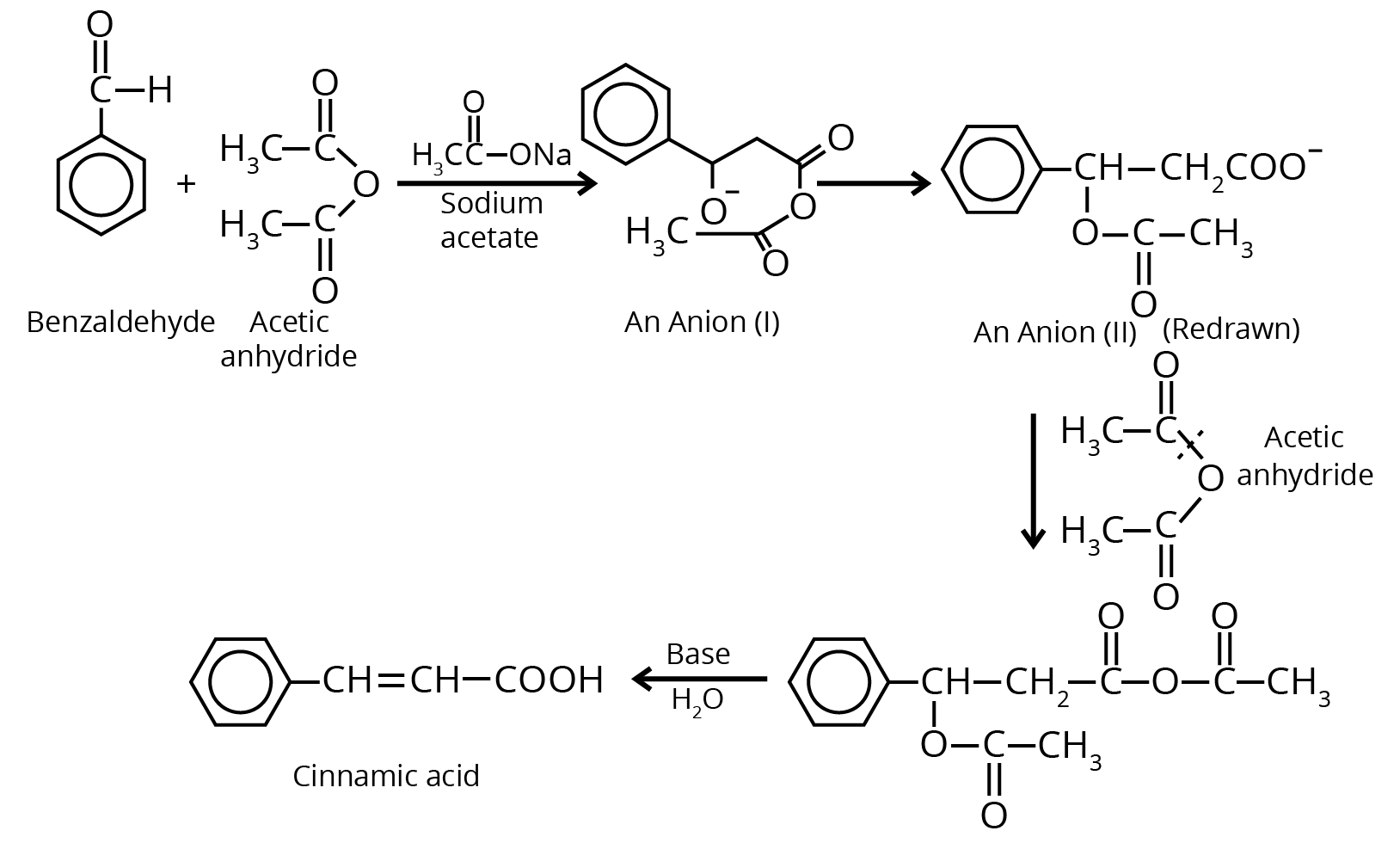 The acid-catalyzed conversion of ketoximes to N substituted amides is known as Beckmann rearrangement.

1. The carboxylic acids react with metal to liberate hydrogen and are soluble in NaOH and NaHCO3 solutions. 3. Carboxylic acid gets reduced to alcohol.

4. Hell Volhard Zelinsky Reaction- Aliphatic carboxylic acids react with Br2 or Cl2 in presence of phosphorus (or phosphorus halides) to give haloacids.

5. Schmidt Reaction- Carboxylic acids react with hydrazoic acid in presence of concentrated H2SO4 to give amine.

6. Benzoic acid is attacked by the usual electrophilic reagents Chlorine, Bromine, Nitric and sulphuric acids to give m-derivatives.

1. Names the reagent that is use in the transformation of Hexan-1-ol to hexanal:

2. Write structures of the products of the given reaction.

Sol: The product formed in the above reaction will be propiophenone. The structure of this compound is given below. This reaction takes place in the presence of lewis acid and non polar medium.

Key Points: The reaction given above is an acylation reaction.

1. An alkene on ozonolysis gives methanal as one of the products. Its structure is :

Ans: The correct answer is option 3. 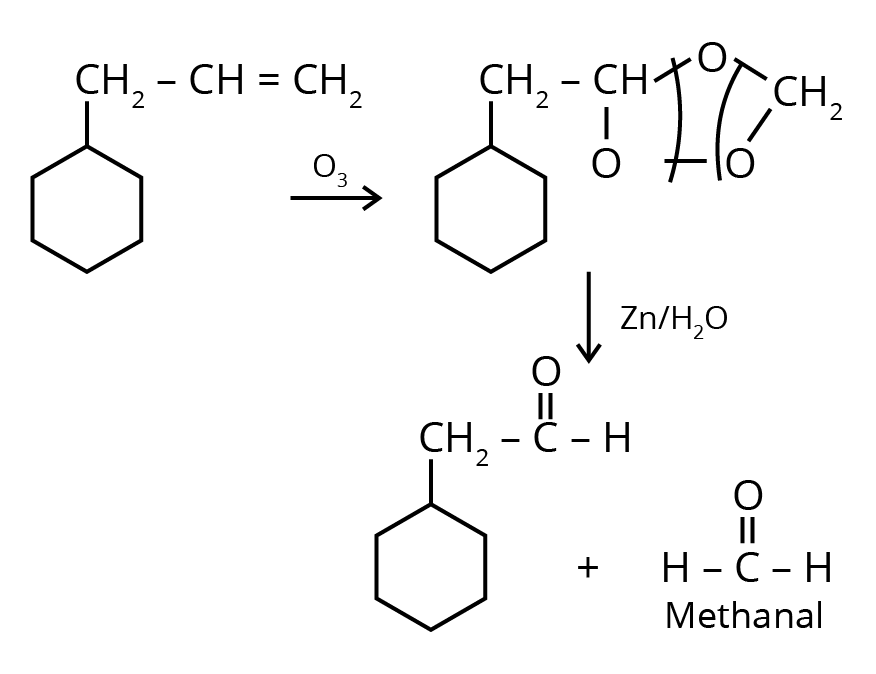 Trick: The given reaction is an ozonolysis reaction. The trick to solve this question in less time is just break the double bond and attach oxygen with the double bonded carbon molecules.

2. Identify compound X in the following sequence of reactions : 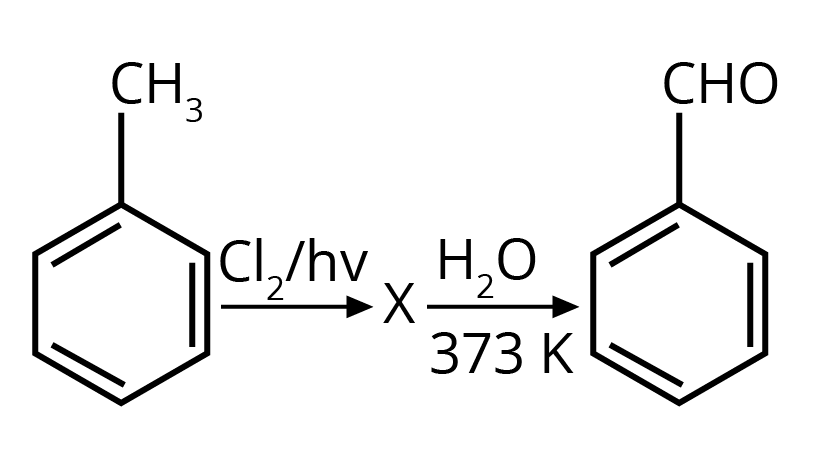 Ans: The correct answer is option 3.

Trick: Two hydroxyl groups on the same carbon are unstable and lead to dehydration and form an aldehyde or ketone (formation of double bond oxygen).

3. What is the IUPAC name of the organic compound formed in the following chemical reaction?

Ans: The correct answer is option 4. Trick: The given reaction is a grignard reaction.

1. Give names of the reagents that is used to bring the given transformations:

2. Would you expect benzaldehyde to be more reactive or less reactive in nucleophilic addition reactions than propanal? Explain your answer.

(Ans: Less reactive due to resonance)

In this article, we have provided important information regarding the chapter aldehyde, ketones and carboxylic acid such as important concepts, reactions, etc. Students should work on more solved examples and previous year question papers for securing good grades in the NEET exams.

1. In the NEET examination, what is the contribution of the aldehyde, ketones and carboxylic acids chapter?

Approximately 2-3 questions from this chapter appear on the exam, covering roughly 12 marks and accounting for 3-4 percent of the total marks.

2. What are the main points to remember while tackling problems involving aldehyde, ketones and carboxylic acids?

3. What are the important topics that need to be covered from this chapter to score good marks in the NEET exam?

Canizaro reaction, aldol condensation reaction, ozonolysis of alkenes and reaction with grignard reagent are the main topics from this chapter that comes in NEET exam.