NCERT Solutions for Class 4 EVS Chapter 15 From Market to Home teaches the concept of different kinds of vegetables and fruits with the story of a vegetable seller. These NCERT Solutions are available in PDF format and can be downloaded for free. You can also reach out to our team of experienced and skilled teachers and subject experts to clear all your doubts. They have prepared the concepts in a step–by–step method and they are self-explanatory. Students who have availed of these Solutions from Vedantu have shown remarkable improvement in their grades. 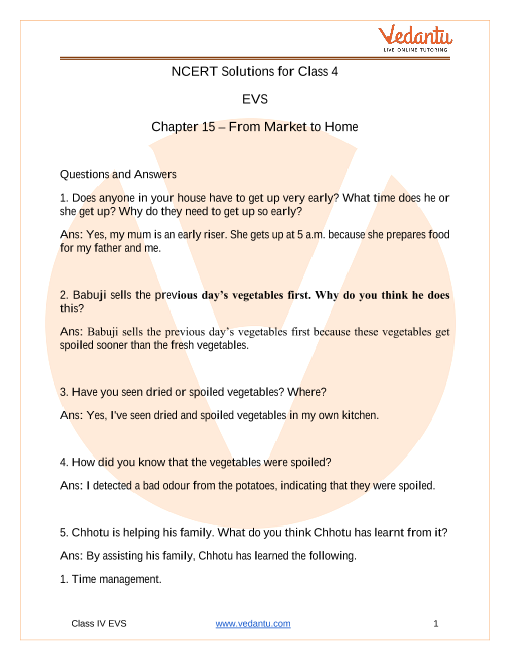 1. Does anyone in your house have to get up very early? What time does he or she get up? Why do they need to get up so early?

Ans: Yes, my mum is an early riser. She gets up at 5 a.m. because she prepares food for my father and me.

2. Babuji sells the previous day’s vegetables first. Why do you think he does this?

Ans: Babuji sells the previous day’s vegetables first because these vegetables get spoiled sooner than the fresh vegetables.

3. Have you seen dried or spoiled vegetables? Where?

Ans: Yes, I've seen dried and spoiled vegetables in my own kitchen.

4. How did you know that the vegetables were spoiled?

Ans: I detected a bad odour from the potatoes, indicating that they were spoiled.

5. Chhotu is helping his family. What do you think Chhotu has learnt from it?

Ans: By assisting his family, Chhotu has learned the following.

5. Learn to keep vegetables fresh for a long time.

6. How do you help the elders in your family?

Ans: I assist my mother with dishwashing, dusting, and vegetable chopping.

7. Look at the clocks given below. Write what you do, and what Vaishali does, at the time which the clocks are showing.

Vaishali – She wakes up and immediately begins assisting her parents.

Vaishali – Putting the vegetables from the previous day in gunny bags.

Me- Going to Sleep

8. From where do you get vegetables for your home? Who brings the vegetables?

9. The next time you get okra (Bhindi) at home, look at them carefully. Are all of them the same size?

Ans: No, they are not all the same size.

10. Find the longest and the shortest one. Measure them.

Ans: The longest okra is 7 inches long, while the shortest is 3 inches long.

Ans: No, not all the okra is the same thickness or colour. No, they do not have the same number of seeds.

12. Seema’s mother has brought some fruits and vegetables from the market. Can you find them in this picture? Colour them and write their names alongside.

13. Given here is a list of vegetables and fruits. Which of these will spoil earlier, and which will stay for some days? Write the names in the correct column. You can add more names in the list.

14. Some of these fruits and vegetables are smooth to touch while some are rough. From the list above, put the names in the correct column.

15. Which vegetable do you find the heaviest to carry? Write its name and draw its picture in your notebook.

Ans: Jackfruit is very heavy to carry and typically the largest fruit known which weighs almost 5-8 kilograms. The harder the skin outside, the soft and juicy the fruit inside.

16. Which is the lightest fruit or vegetable that you have eaten? Write its name and draw the picture in your notebook.

Ans: Cherry is the lightest fruit known. It is often used on cakes and pies to decorate.

17. Write names of three vegetables which do not have seeds.

18. Talk with a vegetable-seller in your area. Ask the following questions and make a brief report in the notebook.

a. What is his or her name?

b. How many people are there in his or her house? How many children are there at home?

Ans: There are 6 people in his home including 2 children.

c. What are the names of the children? How old are they?

Ans: He has 2 children, and their names are Rahul and Riya. Elder son Rahul is 12 years old and his sister Riya 6 years old

d. Who all helps in the work of selling vegetables?

Ans: Ramlal’s wife helps in the work of selling vegetables.

e. Who all stay with the vegetable cart or sit in the shop?

Ans: Ramlal and his wife together stay with the vegetable cart or sit in the shop

f. What vegetables do they sell?

g. What time do they start work?

h. For how many hours in a day do they work?

i. Ask them about any three vegetables that they sell.

This is the story of Vaishali whose father is a vegetable seller. Vaishali narrates the activities of her entire family throughout the day. Vaishali says that their day starts at 3 o’clock in the morning. Her whole family - her mother, elder brother, and the younger brother, Chotu help the father in his work. Their work starts by sorting out the previous day’s vegetables from the gunny bags and baskets. They sort the old vegetables in order to bring fresh vegetables from the market. After having done this, they have their morning tea and her father leaves for the market to buy fresh vegetables. When he is gone, Vaishali, her mother, and Chotu put the previous day’s vegetables back in the gunny bag and sprinkle water on them to prevent them from drying.

By 6:30 am, Vaishali’s father used to be back with fresh vegetables. Vaishali says, at that time her house looks like a small vegetable market. There are many kinds of vegetables and they need to quickly sort them so that their father can reach the bazaar on time. They keep aside those vegetables that are not fully ripe because they cannot be sold in the market. As soon as they finish sorting, their father arranges the vegetables on the hand-pulled cart and leaves for the bazaar. Their father has to reach the bazaar as soon as possible so that his regular customers don’t go to the other sellers to buy vegetables. Vaishali’s elder brother also leaves for school immediately. Chotu attends afternoon school so he rests for a while and then goes to the bazaar to help his father till it is time to go to school. Vaishali’s elder brother goes to the bazaar to help their father after school. They both come home very late at night. By then Vaishali and Chotu are asleep. Everyone else goes to sleep at 11 o’clock at night to wake up at 3 o’clock the next morning.

In the story, we have read that Vaishali and her family keep sprinkling water on the vegetables to keep them fresh. Let us understand which vegetables remain fresh for a longer time and which don’t. Vegetables and fruits both are perishable. It means they get spoilt very soon. Some vegetables like potatoes, onions, ginger, and garlic can remain fresh for a longer time. Vegetables and fruits like spinach, tomatoes, bananas, etc. need to be eaten soon otherwise they get spoilt.

We have learned two important things in this chapter. First the different kinds of vegetables and second how we should share work in the family. It is very important that we divide work among the family member so that it does not become a burden for only one member.

Q1. Why did Vaishali and her Family Always Sprinkle Water on the Vegetables?

Ans: Vaishali and her family sprinkled water on the vegetables to prevent them from drying and to keep them fresh.

Q2. Name Some Vegetables that have Rough Skin and Smooth Skin.

Q3. How can Vedantu Help in Improving my Grades?

Ans: You can improve your grades by referring to the study materials and worksheets available on Vedantu. There are test papers available on Vedantu, by which you can test your progress with a particular subject. You can reach out to our team of experienced and skilled teachers to clear all your doubts. They have designed the concepts in such a method that they are self-explanatory. Thus Vedantu can help students to have a remarkable improvement in their grades.

Q4. Why is Vedantu Better than Other Coaching Classes?

Ans: Vedantu is better than other coaching classes because Vedantu focuses on conceptual learning rather than rote learning. Vedantu provides videos that are very interactive, subjective, and objective. Dedicated mentors are available to clarify any kind of doubts. Online live classes are available to support students with their exam preparation.

Ans: Vedantu’s NCERT Solutions for Class 4 EVS Chapter 15 are the perfect study companion for students. These solutions (available free of cost on both Vedantu’s website and the Vedantu mobile app) not only provide answers to the questions asked in NCERT textbooks but also provide explanations, summaries, and additional information wherever necessary. The explanations provided by Vedantu's experts on the NCERT solutions page will allow the students to understand the chapter’s content and its objective better. This increases their knowledge and understanding of the chapter immensely.

Q6. Are the explanations provided for Class 4 EVS Chapter 15 by Vedantu reliable?

Q7. Why do you think Vaishali’s family gets up at 3 O'Clock in the morning?

Q8. Why does Vaishali’s father try to sell the previous day’s vegetables first?

Q9. Do you think being a vegetable seller is an easy job?

Ans:  As we have seen from Vaishali's family's daily routine, the entire family gets up super early in the morning. Everybody is involved in the business. Vaishali's father spends a long hard day buying vegetables and selling them in the vegetable market. They even return late to their house and get only a few hours of sleep daily. Being a vegetable seller is indeed a difficult job. Next time you see someone selling vegetables, be kind to them and remember how hard their job is.