What are idioms? Why are they so important in communication and expression? To find these answers, along with some great examples to get you started, keep reading and try to remember as many as possible. You should also remember to use them as often as possible to be able to get them naturally in your daily communication.

Idioms are a group of words that are put together to be used for a specific purpose or a specific meaning, which is different from each individual word. These are used in common verbal exchange to say things in a different way to make the conversation interesting. Let us go through some examples to understand the concept better. 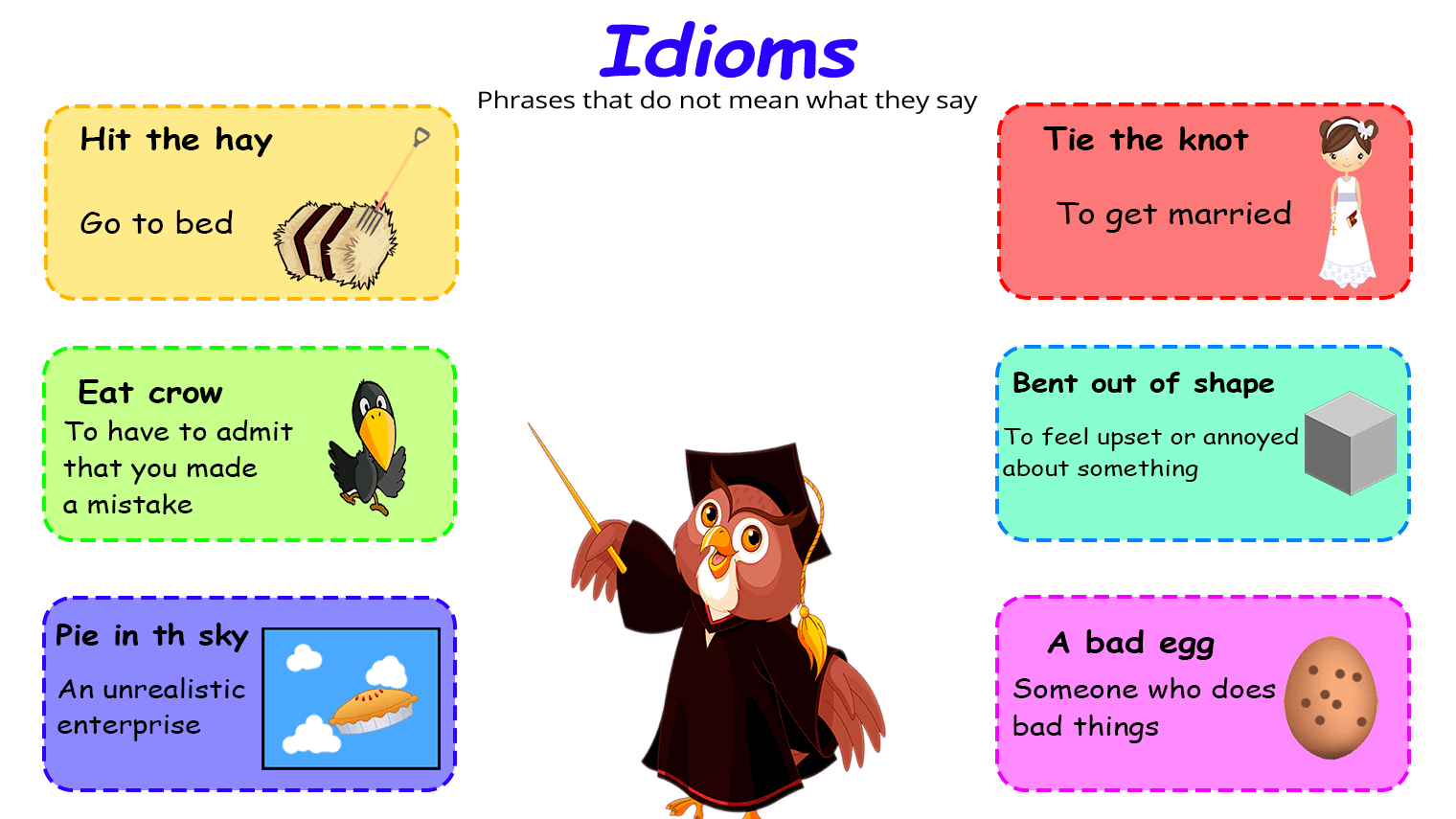 Some Useful Idiom Examples for Kids to Help in Creative Writing

Definition: This is an idiom that means something which is not easy to tackle.

An example: He tried his hand at Coding, but it was a hot potato for him.

Definition: It means to get two tasks done with the effort of one.

An example: I am killing two birds with one stone by playing a video game which pays me to play.

Definition: It means to sternly alert someone of some danger or to ask to stay away.

An example: A swimming instructor should warn off every learner to be careful while inside the pool.

Definition: This idiom is used to indicate the ease of doing something.

An example: Scoring goals against the opponent team should be a piece of cake.

Definition: It means to narrate a lengthy and far-fetched story.

An example: Andrew likes to spin a yarn about his amazing vacations every year.

Definition: It is an idiom used to mock or tease someone, usually by calling the person by unpleasant names.

An example: Richard was upset because his friends at school called him names.

Definition: This expression is used to denote that something is never possible.

An example: Jensen will stop biting his nails when pigs fly.

Definition: This idiomatic phrase is used to define ideas which are not very practical.

An example: Maddy has been building castles in the air about turning into a superhero, flying above the city.

Definition: It means to cause great trouble.

An example: He always bothers his boss and stirs up a hornet’s nest for everyone around the office.

Definition: This idiom refers to a student who tries to make his/her classmates laugh.

An example:  I remember that Charlie used to be the class clown; he would always do something or the other to keep the class laughing and cheerful.

Definition: It refers to a long story that is usually difficult to believe in.

An example: Instead of telling tall stories, you should get some actual work done.

Definition: It denotes language that is not understandable or is meaningless.

An example: All kids mostly speak mumbo jumbo when they first learn to talk.

Definition: It is used for people who are awake and active late at night.

An example: Paul is a night owl; he studies till 3 a.m. every day.

Definition: It is used to denote how easily or quickly a task can be performed.

An example: Bob’s your uncle, just go ahead and take a shot at the target.

Definition: This idiom is used for people who are born into wealthy families.

An example: I was not born with a silver spoon in my mouth, so I had to work my way through all troubles to be able to buy a house for myself.

Definition: It means to pay undivided attention to listen to something or someone.

An example: You can tell me your story now. I am all ears.

Idioms are phrases that do not always mean what they seem to say. But these are very important in making conversation or expressing oneself in a fun and new way. They can make a simple statement exciting and unique. In creative writing and writing essays, idioms can come in handy as they can make your piece of work stand out as one of a kind!

1. What is the importance of idioms?

Idioms are used to transform plain, easy to understand ideas into interesting and unique phrases, which can leave a lasting impact on any reader or listener. They have a way of bringing out the creative side in you and show that to the world. Having a rich vocabulary of idioms can greatly help in creative writing, writing essays, and even in delivering great speeches.

2. Why should we use idioms instead of expressing in a simpler way?

It is true that writing or speaking in simple sentences is easier and less time-consuming, but idioms are like magical ingredients. They can make any conversation lively or gloomy, depending on which idioms you use. Idioms have the power of influencing listeners or readers in a unique way, which they will remember for a long time.