Introduction to English Grammar for Kids

Learning different subjects throughout our life and learning the rules of those subjects is necessary for all of us. Subjects are vital. Hence, to master the subject of English, one has to understand the basic grammar for beginners and go through the English grammar notes for a better understanding of the language.

There are several English grammar rules that play an important role in forming sentences without which the sentences might be incomplete. These rules are important for the perfect construction of sentences that play to be meaningful. 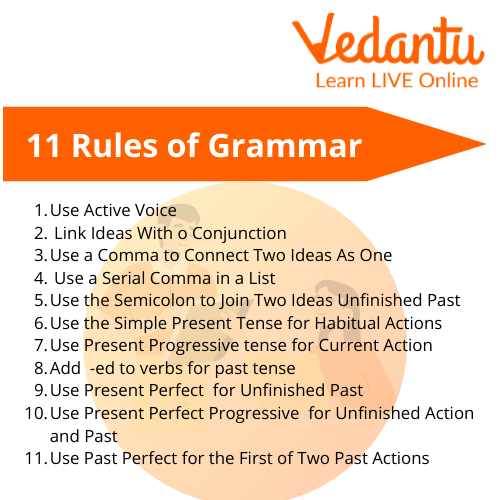 Above are some of the major English grammar rules that any kid must know about. There are many grammar rules, such as subjects and predicates, punctuations, etc., which form a meaningful sentence. Let's start learning about basic grammar for beginners.

Predicates and subjects are vital English grammar rules which are considered the building blocks of any sentence. No person can form a sentence without having a subject in it. Even the smallest sentences contain subjects.

For example, Rita and Sita are excited to start their journey.

Here, since there are two people involved in the sentence, then the subject is considered as a plural which is in agreement with the sentence that is their journey, which is plural.

Choosing the correct words while writing a sentence to express the right emotion is necessary. Different types of sentences are made using punctuation in them. 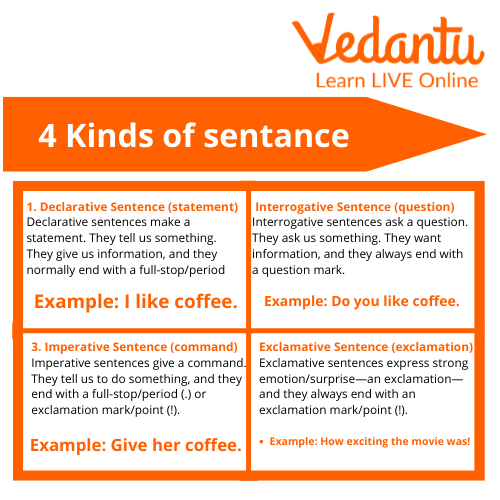 Here are the four main types of senses present in English grammar.

The role of a declarative sentence is to make a statement, and it involves the period(end) of any sentence.

For example- He is a boy with dark hair.

A sentence which consists of a question and expresses the emotion of questioning is considered an interrogative sentence. Such types of sentences have a question mark(?) at the end of them.

For example- Is she going home today?

The sentences which have an expression of surprise and consist of different sudden feelings are called exclamatory sentences. Such sentences consist of an exclamation mark(!) at the end.

For example - Wow what a beautiful day!

The imperative sentence can be considered as another form of exclamatory sentence which contains a request/an order/a command and sometimes the use of an exclamation mark at the end also.

Please give me that book.  (request)

Other building blocks of any sentence are capital letters and punctuation marks for the clarity of the meaning of sentences. Capitalization of words is done at the beginning of the sentences and is also used to emphasise the proper nouns like names of different places or a person.

Moreover, the punctuation marks are used to express the emotions in the sentences through different symbols like a comma(,) which is used for a small break, an exclamation mark which denotes several moods like surprise, anger or a command and the question mark that is used to denote a question while reading or speaking.

Other than this, there are several other punctuation marks like colon(:), semicolon(;), dash(-), etc., which are further useful in English Grammar topics.

Subjects are vital, and so is the English language. For kids, grammar serves to be the paving path of their future and teaches a child basic manners as well.

FAQs on Basics of English Grammar

1. Why are English grammar rules important?

Every language has a set of rules which ought to be followed to make sense in that particular language. For English, the English grammar rules are necessary and help people understand the English language perfectly. Rules explain how words are organised in a sentence.

These grammar rules are considered the basic guidelines for the perfect formation of sentences and paragraphs, which ultimately helps in a better understanding of the meaning for the readers and learners as well. Hence, English grammar rules are an important aspect to learn for every individual.

2. Which are the most important parts of English grammar?

Adverbs, verbs, nouns, pronouns and adjectives are the most important parts of English grammar.

3. What are different Grammar topics for English?

Along with these factors of grammar, the proper construction of sentences is also necessary for the generation of exact meaning and expression of sentences. This is a necessary aspect since it helps the reader with learning the exact emotion of the writer. The above English grammar notes provide all the basic needed information for all the major English grammar topics.