Difference between Vapor and Gas

VIEW MORE
Matter exists in three main states, solid, liquid and gas. Solids have a definite shape and volume (example Ice). Liquids, like water, have a defined volume but can change their shape depending upon the container. The third state, the gaseous state has neither definite shape nor volume. An example of gas is oxygen, carbon dioxide and water vapour.
Change in Phases

By changing the temperature and pressure, matter can be changed from one form to another. Lowering temperature or increasing pressure moves the molecules of matter closer to each other, making them more compact. The following phase changes can be done through this process:

Increasing the temperature and reducing the pressure makes the molecules to move further apart from each other and the following phase changes can be made through this process:

Sometimes, a substance may skip a phase with a change in ordinary conditions. A solid can become a gas skipping the intermediate liquid state and this is called Sublimation. Examples of this are dry ice, ammonium chloride, camphor and iodine.
About Vapour

Vapour is formed by boiling a liquid and the process is known as evaporation. It is a transition state from liquid phase to gas. It can co-exist with a liquid or solid when they are in the equilibrium state. Vapours of water and vapours of mercury are good examples. Water vapour refers to water in a gaseous form which is formed after boiling or evaporation. Aerosol is a suspension of particles of solid, liquid or both within a gas.
Water vapour emits and absorbs infrared radiation at many more wavelengths than other greenhouse gases and accounts for the largest greenhouse effect. Ironically a large component of the earth’s atmosphere is made of water vapour compared to other greenhouse gases. The water vapour content in the atmosphere is variable and so difficult to measure.
About Gases

The gas is classified as one of the four states of matter; they have distinct feature of occupying the available space regardless of the shape and volume. This feature is because of the presence of very little intermolecular attraction between the molecules. The other three states of matter are solid, liquid and plasma. The solids have fixed shape and volume, whereas the liquids have fixed volume but lack the fixed shape feature; they take the shape of the container they are poured in. The gaseous molecules are constantly moving independently due to the weak force of attraction present between the molecules. So, the gas can fill out the container of any size as the gaseous molecules are constantly on the move. The compounds which even remain in the gaseous state are classified as the gas. For example, the carbon dioxide is classified as gas, that is because it remains gas even in the room temperature. 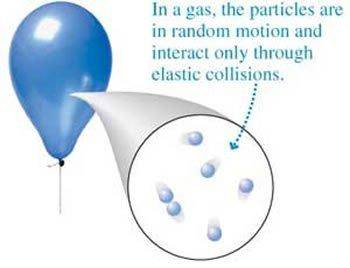 Figure 1: Gas particles
The molecules in a gas are in a constant free motion past each other and can be compressed to form compressible fluid. Some gases cannot form solid or liquid at any temperature and are called fixed gases. The molecules in a gas are vastly separated and hence, gases are invisible to the naked eye. Carbon dioxide is an example of a gas that exists in gaseous form at room temperature.
Gases have the following properties:

Nitrogen and oxygen are the most common gases in the atmosphere (78% Nitrogen and 21% Oxygen). Many other gases are present in lower amounts.
The list of some gases (at standard conditions) is provided below along with the formula.

Differences between Vapour and Gas