The Biblical Story of Daniel - Daniel in the Lion’s Den

Do you like stories from the Bible? Do biblical tales tickle the John Milton in you? Do you like reading and analysing fables and parables? If that is the case, then the story of Daniel is bound to catch your fancy and, maybe, you will learn more about the Almighty’s providence and his ways of displaying prowess and absolute control.

The Story of Daniel

The story begins with King Darius of Jerusalem who came to a stern decision and passed a law against praying towards the city. Although this new law was at play and under strict implementation, Daniel, our protagonist, continued to pray regularly, three times each day.

Very soon, it was evident that Daniel was surrounded by men who were really jealous of him. Daniel was an honest and hardworking man. This made it difficult for the other ministers around him to oust him from the kingdom of Jerusalem. These men soon grew terribly angry with Daniel and would go to any extent to make sure he was completely out of the king’s court and their vicinity. So, they came up with an evil plot to get rid of him.

These jealous ministers went to King Darius and put forth a formal complaint against Daniel for disobeying the law. When King Darius heard about this act, he was extremely upset. Daniel was one of the king’s presidents, and the king had no intention of punishing him for his disobedience to the law. Darius tried really hard to resist the anger and objection of his courtmen; he tried his best to save him from the impending outcome, but the wicked ministers in his court continued to insist on Daniel’s punishment.

It was true that Daniel had indeed failed to obey the law of the kingdom, and it was only customary to punish any civilian who committed treason. There remained no other option for the King but to punish his favourite Daniel. He was thrown into a den filled with hungry lions. The opening of the cave was sealed thereafter with a huge stone. However, King Darius was very worried about Daniel, so much so that he could not sleep that night. 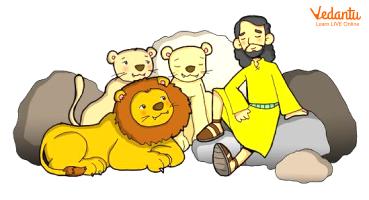 Daniel was Thrown into a Lion’s Den

The king got up the next morning and hurried to the den. As he called out for Daniel, to his utter amazement, he could hear Daniel’s voice coming out of the cave instead of the roaring of lions. Daniel explained to the King that God had saved him by sending an angel. He told Darius that the angel put shucks over the lions’ mouths and they were not able to hurt him at all. 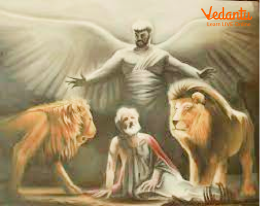 Angel in the Story of Daniel

Finally, King Darius was very happy to bring Daniel out of the cave and decided to punish the wicked men who had conspired against Daniel.

The name Daniel means “God is my judge” in Hebrew. Interestingly, in the story, Daniel serves as God demands. He is guided and aided by the Almighty, and his life is preserved by God Himself when no man is able to deliver justice. The story serves to state that praying to God will not go futile if there is good intent and willful participation in it.

1. What does the story of Daniel teach us about God’s Providence?

The story of Daniel elaborately demonstrates the glory of God’s providence towards His people. The Almighty was consistent in demonstrating His stature through Daniel, making sure that His presence was felt among the people of Babylon. He rightfully hailed Himself above the active rulers of Babylon, showing them the limitations of their power. He displayed His might in protecting Daniel in the lion’s den ­– when Darius sat back, simply worrying, but without the power to bring a change.

Throughout the entire story of Daniel, God was not only helping Daniel with his needs, but He also showered blessings upon him, giving him the wisdom and knowledge that was required to interpret his dreams, which would, in turn, help him govern the kingdom. The Almighty granted him favour with several rulers and preserved his life when his evil contemporaries plotted against him. Through His providence for the protagonist, God succeeded in bringing glory to Himself, showing that He is in supreme control.

2. What does the story tell us about the character of King Darius?

From what we have learnt in the story, King Darius was a kind-hearted man whose mind came under the clutches of his evil courtmen. However, his true nature emerged victorious in the fight against wrongful decisions, and he made sure that he rectified the mistakes he had made under evil influences. That is what should be most important.

People often deviate from the righteous path, but it is their inner goodness that allows them to break free from the clutches of whatever is bad. As a king, it was Darius’s duty to punish a law-breaker. However, as a good human being, he served the evil ministers well after saving an innocent soul.