Ali Baba and the Forty Thieves Short Story in English

An Introduction to the Adventures of Ali

Ali Baba and the forty thieves short story is a folk story from One Thousand and One Nights. It was added to the collection by Antoine Galland, a French translator who heard it from Syrian storyteller, Hanna Diyab, in the 18th century. It has been widely recounted and performed in many media, especially for children, as one of the most well-known Arabian Nights tales. Many different versions of the story have been told, each with modest differences in title and detail.

Let us look into the adventures of the boy named Ali mentioned in the short story below.

There were two brothers who lived in Persia. Kassim and Ali Baba were their names. They lived with their father but soon one day the father of both the boys died. After the death of their father, the brothers fought more often.

"It's not your home anymore," Kassim, the oldest brother, stated after fighting with his brother.

"Leave and don't return." Ali Baba had gone out of his residence. He climbed the mountain and discovered forty thieves.

"OPEN SESAME!" they shouted in front of the large rock. The big rock parted with the magical chant, and all forty robbers rushed within.

"What a sight," Ali Baba exclaimed.

"OPEN SESAME!" Ali Baba exclaimed when the thieves had all fled. Ali Baba entered through the door on the rock. The cave was brimming with valuables. 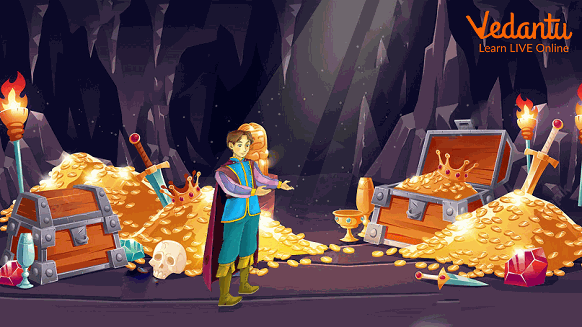 Ali Looking at the Treasures of the Cave

Ali Baba said, "Amazing!" He returned home with some of the goodies and slowly, he grew wealthy. As he started living a happy life he recruited a maid, who would help Ali in his household chores. The maid was a clever, brave and beautiful young woman.

Kassim, Ali Baba's sibling, found out about it shortly after. He was envious of Ali. "Where did you obtain all these things?" Kassim asked Ali Baba when he paid him a visit.

Ali did not answer at first.  Kassim persisted in his inquiries. Finally, Ali Baba revealed the remote location to Kassim. Kassim was impatient.

"OPEN SESAME!" he yelled as he dashed to the cave. The gate started opening. He was ecstatic, and he crammed all of the treasures into his sack.

When he was ready to leave, however, he discovered the door had been shut. He sobbed as he struggled to recall the magical phrases.

"OPEN DONKEY! OPEN MONKEY!" he exclaimed. He tried over and over again. However, it was a complete failure.

The thieves reappeared soon after, and Kassim was brutally murdered by the enraged robbers. 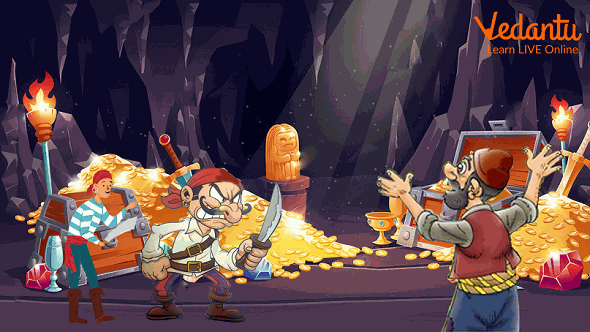 Kassim Being Attacked by Robbers

Soon Ali Baba had learnt about his brother's death. He went to the cave and took the body of his brother and buried him in a beautiful spot.

After realising the body of the man missing, the robbers were even more enraged than earlier.

"Someone was here, and he stole the man," they stated. Let's go to town and look for him." They quickly realised it was Ali Baba.

Finally, one of the robbers caught a glimpse of Ali Baba. He scribbled something on Ali Baba's door.

Ali Baba's maid, on the other hand, noticed it. She left the identical mark on all of the town's doors.

The thieves arrived the next day to take Ali Baba. They couldn't discover Ali Baba's residence because all the doors had identical markings.

However, the maid noticed them lurking once more. She filled the jars with hot oil. The screams of the robbers in the jars were followed by their deaths.

The leader was the last robber alive. He disguised himself as a guest.  As a guest, he went to Ali Baba's residence. Ali Baba's maid, on the other hand, knew who he was.

She arrived with two swords and began dancing to entertain the guests. She inched closer to the thief as she went. She instantly stabbed him. Ali Baba afterwards found out what had transpired.

Her assistance and insight astounded him. "Thank you for saving my life," he expressed his gratitude. Ali Baba married his maid, and the two had a happy life together.

Moral of the Ali Baba and the Forty Thieves Short Story

The moral lesson to be learnt from "Ali Baba and the Forty Thieves" is that we should never bow down to greed. Greed should never be allowed to rule our lives. At some point during the novel, every one of the characters feels guilty about being selfish. As shown in the story it was the greed and jealousy that led to the death of the brother of Ali, Kassim. The story also teaches us to be brave in the face of adversity like the maid of Ali. She was brave to fight the robbers and helped Ali to save his life.

1. What happens to the maid in the story?

The maid of Ali was a clever and brave woman. It was the maid who saved the life of Ali multiple times in the story. In the end, when Ali discovered her bravery and loyalty, he married the maid and they lived happily for the rest of their lives.

Kassim was the older brother of Ali Baba. Kassim was always jealous and greedy of the wealth his brother accumulated. After asking many times, when he got to know the secret of the cave, he went to the cave. As he went there he filled up his pockets with gold and riches but as he was trying to go back, he forgot the magical phrase. Soon the robbers found Kassima and killed him.