Verified
129k+ views
Hint:A link between the inner ear and the brain helps in keeping the correct balance when moving and this is looked after by the vestibular apparatus with the help of semicircular canals and the vestibule.

Complete answer:The vestibular apparatus is a somatosensory portion of the nervous system that helps us with the awareness of the position of our head spatially and body and its motion. The vestibular labyrinth consists of these components located deep within the part of inner ear:

Semicircular canals: These comprise of the cells which monitor the angular acceleration of the head.
The Utricle and Saccule: These comprise the cells which monitor the linear acceleration of the head as well as its orientation.
The vestibular labyrinth is a hard bony cavity situated within the portion of the temporal bone. It further comprises the bony structure for the cochlea and the three semicircular canals.
The bony labyrinth consists of the three semicircular canals as well as the two otolith organs, namely the utricle and the saccule. Additionally, it contains the cochlea; the cochlea is considered to be a part of the hearing apparatus. The semicircular canals are arranged in three planes, with each of them making an approximately 90° angle with each other. The diagram given below gives a clear insight into the arrangement of these structures within the internal ear:

So, the correct answer is ‘Vestibule and semicircular canals’. 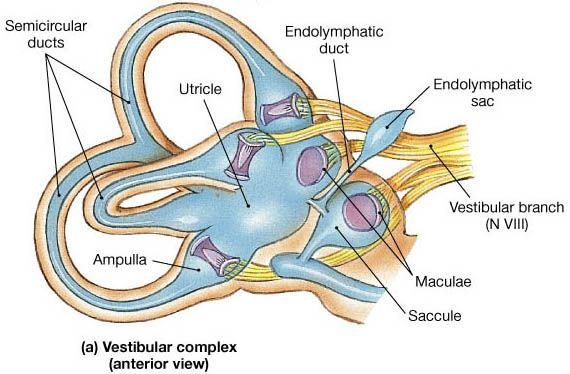