Verified
129.9k+ views
Hint: A cylinder whose bases are circular in shape and parallel to each other is called the right circular cylinder. It is a three-dimensional shape. The axis of the cylinder joins the centre of the two bases of the cylinder. We visualize an image of a cylinder and count all the surfaces. 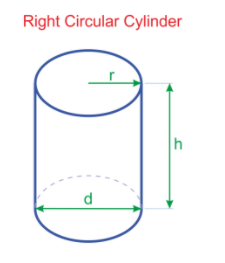 The number of surfaces in the right circular cylinder is 3. Where one side is the upper side, one the lower side and one, the lateral one.