The hard chewing surface of teeth is made of
A. Enamel
B. Dentine
C. Pulp
D. None of the above

Complete answer:Enamel covers the entire anatomic crown of the tooth forming a translucent layer. It varies in thickness and hardness on each tooth and even from one person to another. It can also vary in color ranging from a yellowish tint to grayish white.

It is the enamel’s hardness that enables teeth to withstand blunt, heavy forces. Enamel is so hard as it mainly has inorganic materials: approximately 95% to 98% of it is calcium and phosphate ions that make up strong hydroxyapatite crystals.
However, these are not pure crystals, because they are carbonated and contain trace minerals such as strontium, magnesium, lead, and fluoride. Almost 1% to 2% of enamel has organic materials, particularly proteins called ‘enamelins’, which have a high affinity for binding the hydroxyapatite crystals. The remainder of enamel is made up of water (about 4% of its net composition).
Enamel is secreted by epithelial cells known as ameloblasts.
The ameloblasts are broken down when a tooth starts growing through the gums, removing enamel’s ability to regenerate or repair itself.
This implies that in case the enamel is damaged by any injury or decay, it can’t be restored. 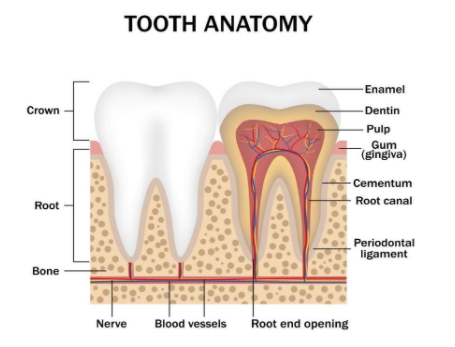 So, the correct answer is A. Enamel.