Prove that the bisectors of the two adjacent supplementary angles include a right angle.

Verified
129.3k+ views
Hint: Here in this question we must know following properties that are mentioned below: -
* Bisectors divide the angles into two equal parts.
* Sum of the interior angles of a triangle is 180 degrees. 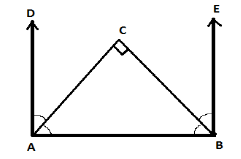